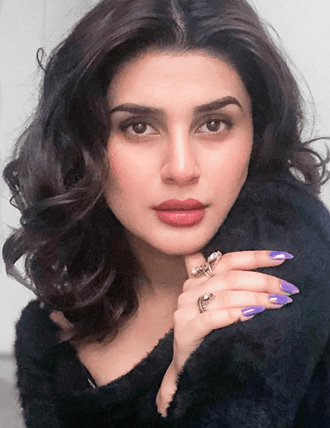 Kubra Fatima Khan (real name: Rabia Khan) is a Pakistani model and actress. She belongs to a Pathan family. She started her showbiz career in 2013. Her debut drama was Sang-e-Mar Mar. Her other dramas include Muqabil, Khuda Aur Muhabbat (S-2), Alif, and Hum Kahan Ke Sachay Thay.

The talented and charmingly attractive actress was born on 16th June 1993 in Multan. She abandoned her studies in pursuit of modeling as well as an acting career. The sharp-minded Kubra started a side-hustle as a graphic designer at the age of 16 due to financial restraints. Later, she kick-started her modeling career in 2013 by working for a magazine named Herald.

Kubra happens to be a book nerd (shares quotes and other such stuff on social media from time to time etc.). Besides her love for books, she is also a dedicated games geek. An interesting fact is how Kubra suffered from potential cancer in Jan 2021. The young actress was shooting for Hum Kahan Ke Sachay Thay at that time. Thankfully though, our beloved actress successfully survived the tough times and returned to her previous cheerful self.