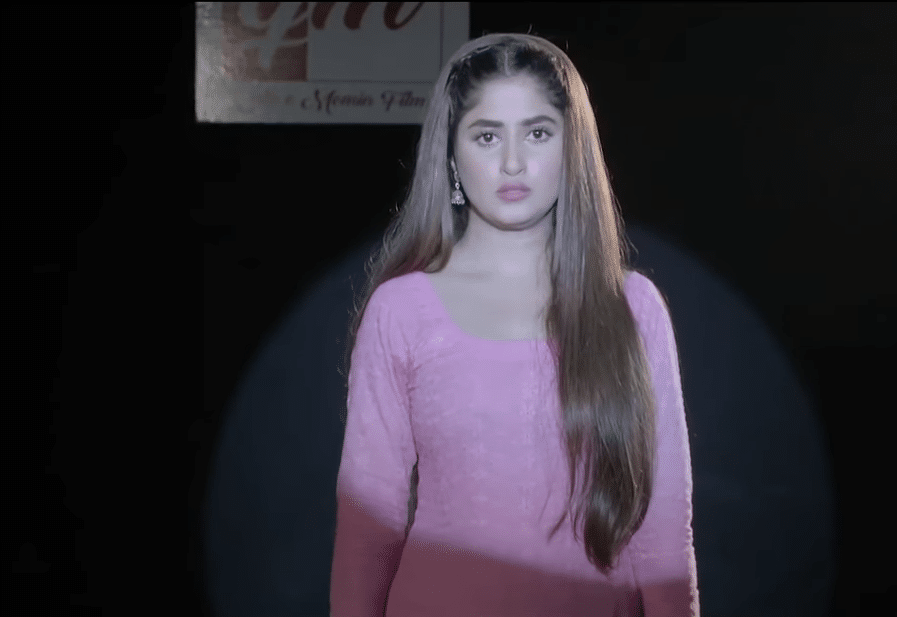 The drama ‘Alif’ revolves around two plots; one in Turkey and the other in Pakistan and we are eagerly waiting for the connection between these two plots. Certainly, Umaira Ahmed has come up with a masterpiece and portrayal of the characters by the likes of Hamza Ali Abbasi, Sajjal Ali and Ahsan Khan will definitely culminate in a heightened response from the audience. Let’s find out the story and review episode 1 of Geo TV drama ‘Alif’.

A little kid in Turkey, whose father has left the house, eagerly waits for an answer from God of his letters. Perturbed by his brother’s ailment, Momina (Sajal Aly) attends an audition where the film director (Hamza Ali Abbasi) humiliates her for her chastity after failing to adapt to a bold character.

The drama starts in Turkey where a little kid awakes from a recurring dream in which he sees his father (Ahsan Khan) dancing in a circle and then vanishing after becoming a star. He writes the incident in a letter to God and complains about no response despite writing so many letters to God. He fears God is angry with him and posts his 30th letter to God via a box located in a nearby forest. In doing so, he gets late from the class and gets punished by the Turkish teacher.

His mother too writes a letter daily to her lot husband Taha (Ahsan Khan) but puts it in a cabinet instead of sending it. We come to know that her husband has left for one year and didn’t return since. The little boy is curious about the entire situation and keenly observes his mother’s attitude. At last, the boy gets a response when her mother informs him about a letter he has got.

In Pakistan, Qalb e Momin (Hamza Ali Abbasi) receives a letter from Turkey and puts it in his drawer with many others without even reading it. It is not clear who has sent this letter. However, the posting envelope indicates that the sender is from Turkey. Qalb e Momin’s identity is revealed as a film director. He gets a phone call from an actress who complains about her little sized picture in the newspaper. He evades her irritating questions and cuts off the phone.

Momina (Sajal Aly) rehearses at home for the upcoming audition. Her mother (Lubna Aslam) longs for a role for her daughter in Qalb e Momin’s movie to turn the family’s fate. However, she is not willing to do all this. Her brother Jahangir is suffering from kidney disease that’s why she is aiming for a film role. She wants to earn money for his brother’s treatment. The brother is also a fan of Qalb e Momin films and is optimistic about his sister’s success. He has to undergo dialysis the next day for which family needs money. Sultan (Saleem Mairaj) makes her up with his archaic tools and compares Momina to a past film queen Husn e Jahan (Kubra Khan). However, she is not impressed.

At the film set, the audition starts where Momina calculates the money required instead of preparing for the audition. Over the phone, she requests her due payment from another producer. Assistant Daud introduces Momina to the director Qalb e Momin who rages at her film inexperience when she states that she has worked only in soap dramas as a side role.

The director demands her to put aside her dupatta since her role demands a bold and glamorous girl. She reluctantly does so but eventually gets a rejection when she refuses to wear a short dress in the film. Instead, she requests a meager role but Momin is not convinced now. She leaves the set and rues her decision of coming here. Then she returns to the set to get her brother’s medical file which she had forgotten there only to see Momin getting closer to the next candidate. He fumes at her interruption and terms it a cheap tactic to gain attention. An argument ensues between the two where she reminds Qalb e Momin of his mentality which enrages the director.

In Turkey, the boy, at last, gets an answer but it is his grandfather who will visit him in the coming days. He is happy to realize the reception of his letters by God. Both child and mother miss their missing family member who got away due to the mother’s fault.  Qalb e Momin flirts with another girl and becomes sad after memorizing Husn e Jahan.

Momina’s mother bemoans her decision of not adapting to the role but she bitterly utters that there is no appreciation of the art and the acting but everyone seems interested in glamour instead. Mother reminds her of Jahangir’s kidney’s dialysis, a fact that agonizes the poor girl. Further, her friend also condemns her for the same reason and inquires why she missed such an opportunity by her rude behavior with the director. It is revealed that Momina got there through her friend’s connection with Daud. At night, she sees her calligraphy workbook and charges herself for her terrible life.

Momina is depicted as a girl who vies for financial independence to get her ailing brother’s treatment but she will not let anyone damage her self-respect. She craftily states the pungent truths of the fascinating film industry. At the moment, she is under immense societal pressure to opt for the way she does not desire. Her mother’s attitude, her friend’s reaction over listening to her refusal for the role and above all, his sick brother’s dilemma is forcing her to do something weird. As a result, she laments her past decisions and her life, in the last scene.

Repeated mention of Husn e Jahan indicates that there is some connection between her and Qalb e Momin when he becomes sad to recollect her memories.

I think there is no need to praise the plot since the name of Umaira Ahmed as the drama writer is self-explanatory. However, it is still necessary to mention that the story of the drama is marvelous where star acting is transforming the novel into a stunning success.

The climax of the drama was the scene where Qalb e Momin and Momina are involved in a brawl. Momina has challenged the authoritative director which has caused a furor. The acting of both the lead characters was superb in the scene. Moreover, Momina’s mother constantly blames her for her refusal of Qalb e Momin’s film which irritates her. Her mother’s reminder of the dialysis brings her back to the real-world. She realizes that the onus of the treatment is on her weak shoulders. The scene and expressions of Momina are worth watching.

Two plots have managed to keep the audience engaged. The character of Husn e Jahan has caused a mystery and the audience is enthusiastically waiting for the next episode to establish a possible connection between two stories. That’s all from episode 1 of Geo TV drama ‘Alif’. Please comment your opinions and suggestions about the episode as well as this piece of writing.