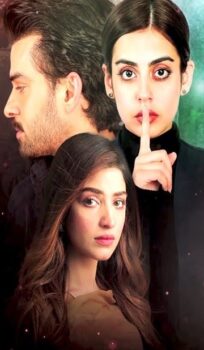 Below is the episode-wise story of the drama ‘Azmaish’. First, let’s look at the characters played by the cast:

Shiza and Samreen; two sisters continuously bother their step-sister, Nimra. Their father, Tufail is oblivious of their actions and falls for his daughter’s innocence. He tells Shiza, the spoiled eldest child, about her marriage proposal. Shiza, who has a secret boyfriend, gets furious and blames her step-mother, Almas for brainwashing her father. Nimra, the neglected step-daughter of Tufail, is mistreated by Samreen who hides Nimra’s entrance pass. Meanwhile, Basit, a supervisor in Tufail’s company and the breadwinner of his family, sees Nimra for the first time at her college.

Shiza goes out with her boyfriend, Rafay. Samreen locks Nimra in the college classroom and lies to their father about Nimra’s bad habits. Almas asks Nimra’s friend, Rabia for help, who goes to college with Basit; her maternal cousin, and brings Nimra back. Tufail slaps Nimra, refuses to hear any excuses, and puts an end to her studies for being a liar.

Tufail complains to his elder sister, Appa, for getting him married to Almas as she covers Nimra’s wrongdoings. Appa doesn’t believe Nimra to be at fault and demands her to continue her studies. Rohail and his parents come to see Shiza, but he rejects her and requests to marry Nimra based on the fact that Almas sent him Nimra’s photo. Shiza dramatizes and locks herself in the bedroom and everybody blames Almas for betraying the family.

Shiza and Samreen act innocent in front of everyone. Almas tries to stop Shiza from going out, who threatens her and still goes. Tufail asks about Shiza, and Almas tries to cover up. Meanwhile, Basit comes to Tufail’s house and sees Nimra over there. Rabia tries to locate their school’s guard who gets sent away by Samreen for being a witness to her conspiracy.

Saima tells Rabia’s mother to keep her away from Basit. Nimra makes amends with her father. Shiza calls on Nimra’s phone and Basit picks up accidentally, leading Shiza to believe that Nimra is involved with a guy. Later, Shiza confronts Nimra in front of everyone including Rohan and Hafsa. Nimra replies that her phone is with Rabia and Rohan supports her.

Nimra proves her innocence by calling Rabia in front of everybody. Appa asks Shiza and Nimra to forget everything. Nimra then thanks Rohan for helping her while Samreen threatens her to stay away from him. Shiza gets Almas in trouble with Tufail over chores and hiring a new maid. Meanwhile, Saima fixes Basit’s marriage.

Tufail throws a party for Samreen for acing her exams where Nimra is degraded by Samreen’s friends. Tufail finds out about Shiza dating Rafay and confronts her, who blames everything on Almas. Almas gets slapped and Shiza threatens to kill herself to get away with the situation. Later, Shiza throws Nimra out of the house at night to seek revenge for exposing her secret.

Nimra complains to her mother about Shiza throwing her out of the house. Shiza tries to talk to her father who refuses to listen so she picks up a knife and threatens to kill herself if he doesn’t accept Rafay. Tufail gives into Shiza’s wishes whilst blaming Almas for everything. Bari Apa also blames Nimra and Almas for being disloyal to the family. Later on, Rafay goes to meet Tufail and Basit gets promoted.

Rafay and Shiza’s marriage gets fixed. Shiza offends Rafay’s mother, Nazish by first returning her family heirloom bangles and then by returning the wedding dress for being old-fashioned. Her entire family tells her to change her behavior. Nazish tells her son to think once before marrying Shiza as she is a stubborn girl. Meanwhile, Basit looks after the wedding preparations.

Nazish makes amends with Rafay and accepts to stay quiet for Rohan’s happiness. Rafay takes Shiza to apologize to Nazish, and Shiza’s fake apology becomes evident. Then, she forces Nimra to wear her hand-me-down at her wedding. At the mehndi function, Shiza tells Rafay to look for a separate house for them. Meanwhile, Hafsa Appa thinks about asking for Samreen’s hand for Rohan.

Rafay visits Shiza’s house and informs her that he won’t move in separately with her. She misbehaves and refuses to live with Rafay’s parents and he breaks the marriage as a result. Tufail fumes at Shiza and visits Rafay’s house along with Almas to sort the matter. Rafay puts an end to the wedding and Almas begs his parents, who question Shiza’s upbringing.

Tufail gets a heart attack and is taken to the hospital after his sister refuses Rohan’s hand in marriage for Shiza. After gaining consciousness, he asks Basit to marry Shiza in front of both families. Shiza tells Samreen that she won’t marry Basit because he is a poor loser and vows to talk to Rafay.

Shiza meets Rafay to convince him but he refuses to marry her. Basit agrees to marry Shiza and his aunt and cousin move away furiously. Saima visits Shiza who keeps a condition of Basit moving in after marriage. Saima agrees but hides it from Basit. Later, Basit refuses to move in but Almas convinces him. Shiza humiliates Basit by telling him to sleep outside.

Basit returns home at midnight and Saima tells Almas who calls him back the next morning. Shiza pretends to be normal with Basit in front of Tufail while degrading him privately. The couple visits Basit’s house after Tufail gives him a car. Basit tells Shiza that she’ll have to move to his house but she refuses. Later, Basit returns and on the way gives Nimra a lift.

Almas informs Tufail about a marriage proposal for Nimra who gets angry at the mother-daughter duo for trapping a rich family and refuses. Shiza mistreats Basit who decides to return to his house but Shiza and Tufail object. Tufail threatens his wife to convince Basit to stay. Meanwhile, Appa tells Rohan that she’ll ask for Samreen’s hand in marriage for him.

Tufail asks Basit to stop using his motorcycle and accompany him in his car. Nimra worries and faints after Shiza threatens her. Samreen informs Shiza that she likes Rohan. Meanwhile, Appa and Rohan invite Tufail and his family for dinner. Almas rejects Saima’s dinner offer, so Saima points out her poverty.

Tufail gets a promotion and his colleagues bother him with scandalous questions. Nimra faints in the university. Shiza insults Basit in front of her family, her aunt, and Rohan. Tufail makes Shiza apologize to Basit. She fights with Basit and he tells her off. Rohan gets Nimra a gift, and Samreen breaks it and warns Nimra to maintain distance from Rohan.

Nimra asks her mother to move out with her and start a new life but Almas refuses. Basit resigns and Tufail insists him to stay. Shiza fights with Basit and later asks for a divorce in front of Tufail. Tufail gets an attack and faints. Samreen asks Shiza to apologize and she seeks forgiveness from Tufail.

Basit takes over the office as Tufail’s health deteriorates. Meanwhile his brother, Sabir gets a guard job. Tufail rejects Rohan’s proposal for Samreen and suggests Nimra for him instead to which Rohan agrees. Samreen cries and Shiza tries to convince her father. Nimra yells at her mother for neglecting her. Rohan overhears Nimra being tormented by Shiza while Basit jumps to Nimra’s defense over this marriage topic.

Shiza threatens Nimra to reject Rohan’s proposal or she’ll kill her. Nimra rejects Rohan’s proposal in front of everyone and Tufail insults Nimra and Almas. Shiza and Samreen eavesdrop on their conversation and Basit notices. Rohan calls Nimra and asks the reason behind her rejection. Shiza overhears and slaps Nimra, and forbids her to contact Rohan. Basit consoles Nimra.

As the drama has been shifted to 07:00 PM slot, we will not be covering it anymore.