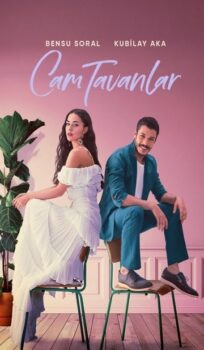 Below is the episode-wise story of the drama ‘Cam Tavanlar’ in English. First, let’s look at the characters played by the cast:

The episode starts with a fire at the main kitchen of a famous restaurant whose co-CEO is a hardworking girl Leyla. She lost her mother in childhood when they were abandoned by her father and she was raised by her school teacher. She manages the chaotic situation in the kitchen and saves the reputation of the company just like she has been doing for eight years with no credit at all. She is hurt when her hopes of gaining partnership are shattered and instead an international co-CEO is arranged for the company. Cem is surprised to see Leyla as they had a romantic relationship in the past which didn’t end well. Haldun, the CEO, clarifies Cem about removing Leyla from the company considering their success through a woman, not a good idea. Cem opposes and Leyla is demoted as project manager. She sadly quits her job where she gave her whole life. As Cem tries to support her, she reminisces about past events and declares a war of struggle with him.

Cem requests Leyla to let him clear their past misunderstanding but she refuses. Leyla visits suppliers of her previous company, Asude as she plans to get people on her side to establish her own new company, Lejuria. Cem follows her to keep suppliers to himself. Both have a tie and as Leyla’s car breaks down, they spend the night at Aunt Ummu’s house who is one of the suppliers. Leyla borrows money from loan sharks and rents a place from Mrs. Süreyya. Şinasi, a former manager at Asude, joins Leyla. Cem finds out from İskender, chef of Asude, about Leyla being alone with no family and how hard she has worked throughout her life. Leyla as planned inaugurates her restaurant and Asude is shocked to find their best client, Mrs. Guler at Leyla’s restaurant. After the first night’s success, Leyla and Cem share a moment.

Leyla and Cem are happy to see a spark between them until it is ruined by a misunderstanding created by Haldun, Asude’s owner. He makes Gülten, an assistant at Asude, lie to Leyla about Cem trying to discover Leyla’s business plans. İskender and Leyla meet and rekindle their old friendship, misunderstood by Cem so he tries to send İskender to London but later changes the plan. Haldun has an argument with his wife, İnci, as she steps forward to support Leyla in her business. Cem presents a new project for Asude but Leyla, being a former expert, is asked for a review. Asude plots against Leyla and both Cem and İskender are worried for her. Leyla is happy with Cem’s project but finds out about his attempt to tarnish the reputation of suppliers. Cem is enraged as Leyla gives negative feedback about his project. Leyla is surprised to find Cem waiting for her as she comes to meet İskender.

Cem and Leyla argue over the conflict caused and end up deciding to go separate ways. Cem is enraged at Leyla’s short-tempered behavior and flies abroad. Leyla misses him a lot and reminisces about past events. She needs an investor to sort out her financial woes and is introduced to Mr. Teifik by Süreyya. Leyla gently declines the offer as he is Cem’s grandfather. Cem returns and offers Leyla a three days partnership for a grand dinner at Asude. She is split between her restaurant and respect. She, brokenheartedly, agrees when Haldun switches the review his wife gave about Lejuria in the magazine. She is bound to bear the rule of Cem in her restaurant plus the changes being brought by him. Cem, on the other hand, in his fury, clears to İskender about not being interested in Leyla. Leyla misses the meeting at Asude preferring her self-respect and Cem comes to see her. Hearing some noises from the storage room, she goes to check followed by Cem. They get stuck and Leyla shivers from extreme cold. Cem tries to calm her down and they share some emotional blast from the past. Just as Cem is about to clear Leyla’s misunderstanding about his betrayal from the past, she faints. Cem manages to break the door and save Leyla. They share a crying and broken hug.

Cem saves Leyla and they prepare for the gala evening. They motivate both İskender and Aylin to resolve the issues and work together. Süreyya helps Leyla doll up for the event and nobody is able to take their eyes from her. The night goes amazing until Haldun shows up and tells Leyla about Cem showing mercy on her to help her financially through a conjoined project. Leyla is shattered by being hit at her respect and pride. Cem feels terrible for satisfying Haldun’s ego while Leyla later regrets scolding Cem when Gülten states his innocence. Haldun laughs in İnci’s face when she demands the divorce. Şinasi shares with Süreyya the situation among Leyla, Cem, and İskender. İskender shares his feelings with Leyla who is confused between the two but her heart wants Cem. Cem’s grandfather approaches Süreyya for spending time while advising Cem at the same time about relationships. Şinasi motivates Aylin to not accept her boyfriend’s betrayal but she doesn’t pay heed because she believes no one would accept her due to her personality. Leyla is to leave for dinner with İskender but Cem arrives. He himself is being stalked by a girl whose identity will be revealed soon.

Leyla leaves with İskender but stops midway thinking about Cem. She clears her feelings to İskender and they promise to remain friends forever. She is delighted to have cleared her thoughts and is excited to go to a food festival with her friends where Cem will also be going. Haldun is furious when Leyla is praised in a way where she has become a threat to him. He decides to finish Leyla from the business line. Leyla and her team are unable to find a room at the hotel but Cem comes to the rescue and they plant camps to spend their trip. Şinasi and Süreyya have a great time at the festival until Şinasi and Aylin start arguing but later patch up beautifully. Leyla, upon seeing Cem being distant, confesses her feelings to him. They decide to sort things out properly when they return home. As they head back, Cem’s ex-girlfriend Suna appears out of nowhere. Leyla is upset and shares her concerns with Süreyya. Suna is angry when Cem ignores her and furiously goes to meet Leyla.

Suna comes to meet Leyla and informs her about Cem’s past. She tells her about Oktay, Cem’s best friend who died and for whom Cem blames himself. Leyla realizes she misunderstood Cem, clears up things with him and they express their love to each other. Suna lures Cemal into telling her about Leyla’s past and childhood and uses that information to taunt her. Suna dominates herself over Leyla making her believe she is not good enough for Cem. Şinasi is unable to pay his house rent and moves in with Aylin. Tevfik rekindles his love with Süreyya being her first husband. Leyla spends a lot on a certain contract which then gets canceled by the client. Turns out, it was all Haldun’s plan in order to buy Leyla’s restaurant. Leyla, being devastated after seeing Asude’s logo at her restaurant, starts throwing stones at it while Suna takes advantage of Oktay’s death to move closer to broken Cem.

Leyla, in rage, records a video that Şinasi spreads on social media. The video becomes a threat to Haldun’s company actually owned by Mrs. Ahsan who also stands by Leyla’s stance. Cem warns Haldun who threatens to expose Cem’s father involved in fraudulent activities. Cem, torn between his family and love, makes a statement against Leyla disturbing their relationship. Another trial hits Leyla when she receives the news of Muku’s death who adopted her in childhood. Muku leaves an inspirational letter for Leyla that causes her to reconcile with Cem. Gülten leaks Haldun’s documents of illegal business through which he framed Cem’s father and is now completely trapped. Leyla wins the fight against Haldun as he is removed from his position with all compensation given to İnci via their divorce. Şinasi is elated as Aylin breaks up with her fiance and embraces colors of life. Suna sees Cem happy with Leyla and silently steps out of his life while the couple receives a happy ending with all their loved ones around them.