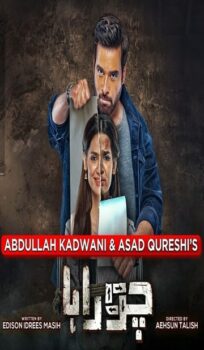 Below is the episode-wise story of the GEO TV drama ‘Chauraha’. First, let’s look at the characters played by the cast:

Zoya is a lively and naïve girl belonging to a middle-class family whose father died when she was a kid. Ever since her mother, Shireen has been working tirelessly in a factory to feed her daughter and her unmarried sister-in-law, Naseem. Despite her low income, Shireen wants Zoya to acquire the finest education and has admitted her to an expensive college. But Zoya feels embarrassed in front of her rich classmates for not having the luxuries of life like big cars and high-tech smartphones. Her neighbor, Arsal has a crush on Zoya and keeps ogling her through his window. Seeing Zoya’s desperation to have a smartphone, Shireen is forced to take a loan from her boss, Mr. Saleem. Saleem has an elder son, Junaid, and a younger daughter, Naila but does not has a wife which is why he is attracted to his colleague, Shireen.

Saleem loans money from Junaid who is involved in some kind of shady business and then takes Shireen to a mobile shop to buy her a new cell phone. Shireen arrives home and gifts Zoya the cell phone, leaving her flabbergasted. Zoya goes crazy with her new phone and can’t stop clicking her photos, creating a spectacle out of herself in front of her classmates. Saleem proposes to Shireen for marriage but she bluntly refuses, saying that she has a grown-up daughter whom she wants to marry off. Junaid is a strict brother and boils with anger seeing his little sister, Naila talking to a boy outside her college and so he drags her home. Zoya is influenced by her friend who has a boyfriend and aspires to have one too. Soon, she befriends a stranger online thinking that it is a girl who in reality is none other than the shady guy, Junaid.

Zoya is frustrated from daily stalking phone calls and detects that Arsal is behind it. So, she barges into Arsal’s house and berates him for his insensitive approach. The truth about Junaid’s business unravels and it turns out that he fools around with girls and then trades them to people which earns him a considerable amount of cash. Arsal arrives at Zoya’s college to apologize for his behavior and then takes her to a mall to express his feelings to her. Zoya is flattered and takes a split second to accept Arsal and his love. Seeing Zoya’s check-in status online, Junaid arrives at the mall to meet her and is puzzled to see her with someone. Zoya takes Arsal to an expensive shop and tries on multiple outfits just so she can click some cool pictures to post online.

Under the guise of a girl, Junaid inquires Zoya about her boyfriend whom he saw her with earlier. Zoya is stunned to know that her friend saw her in the mall and scolds her for not coming up to her to meet. Saleem feels suspicious about Junaid’s true nature of income and inquires him about it. But Junaid refuses to give him any answers and keeps blaming him for his mother’s death who died suffering due to a shortage of money. Later, seeing Naila busy texting, Junaid secretly checks her phone to make sure it is not a boy. However, it turns out that Naila is also involved in a romantic relationship that she has kept hidden from her family. Shireen berates Saleem for ruining her self-respect after a few employees tried flirting with her by offering to lend her money. After college, Zoya makes a plan to meet her online friend at a restaurant but is shocked to see that it is a boy. She slaps Junaid which infuriates him and he ends up abducting Zoya in the middle of the day.

Naseem is worried for Zoya as she has not returned home from college. Seeing her concern, Arsal offers to help but she refuses. On the other hand, Junaid chains up Zoya while she is unconscious. His business colleagues think that Zoya is a waste of time as they won’t be able to make a good ransom in exchange. But Junaid assures them against it and offers to give them his share if Zoya’s family turns out to be poor. In the meantime, Naseem sets out to look for Zoya and returns home dejected. Zoya gains consciousness and begs Junaid to let her go but to no avail. Shireen loses her mind after finding out that her daughter has gone missing and refuses to seek help from the police.

Zoya makes it clear to Junaid that he cannot gain any benefit from her as she belongs to a lower-class family but Junaid pays no heed to it. He demands ten lac rupees from her mother in ransom. Zoya attempts to escape in the night but falls unconscious after encountering horrible dogs. Junaid calls a doctor to check on her and pays him a heavy amount to keep her mouth shut. Having no other choice, Shireen and Naseem head to the police station to file a report. They leave the station in a hurry after a police officer tries to harass Shireen openly. Later, Shireen gets a call from the station informing her about a dead body found by the police. She rushes to the morgue and is relieved to see that the corpse does not belong to Zoya.

Naseem tries to convince Junaid about their poor condition by showing him their house on a video call. He admits his defeat in front of his friends and decides to release Zoya in the evening. He goes home leaving Zoya with them who try to gang-rape her in Junaid’s absence. Fortuitously, Junaid arrives back in time and saves Zoya, beating his friends to a pulp. Naseem suggests Shireen ask her colleague, Saleem for help who promises to support them to get Zoya back. Arsal’s mother, Naseema can’t help but poke her nose into Shireen’s house to acquire gossip from her. When Shireen tries to conceal the truth, Naseema berates her for thinking that people are stupid and don’t understand that Zoya has eloped with her lover. Junaid drops Zoya back at her house and Shireen and Naseem are in tears to see their beloved return home safely.

Junaid catches his sister meeting her lover secretly. After kicking the boy out, he can’t stop thinking that his immoral acts are starting to reflect back on his sister. Saleem returns home after filing a complaint about Zoya and elucidates the entire situation of Zoya’s kidnapping to Junaid, leaving him anxious. Naseem suggests Shireen marry Saleem as he is interested in her but Shireen hesitates. After Saleem finds out that Zoya returned home safely, he keeps cursing and badmouthing the kidnapper, making Junaid even more guilty. The gossip mongers arrive at Zoya’s house to get some interesting details about her kidnapping but Naseem kicks them out. Unable to bear the fact that her family is defamed in the neighborhood, Naseem falls unconscious. Shireen rushes her to the hospital with the help of Arsal. Zoya holds herself responsible for Naseem’s condition and Arsal consoles her. Naseem’s condition worsens and before taking her last breath, she asks Saleem to marry Shireen.

Shireen and Zoya are devastated by Naseem’s death. Arsal insists his mother attend the funeral to avoid the neighbors from creating stories. The neighbors keep gossiping about Zoya’s bad character and Shireen’s affair with her colleague. Saleem decides to help Shireen financially and calls Junaid to bring him some cash. Junaid arrives at the house and Zoya is flabbergasted to see him there. At Naseem’s burial, Saleem is surprised to see Junaid shedding tears at the corner of the cemetery. The lecherous police officer barges into Shireen’s house in the middle of the night and insists on taking Zoya’s statement privately. At first, Shireen refuses but after the officer’s warnings, she lets him talk to Zoya. He starts investigating Zoya and forces her to spill her lover’s name. Zoya hesitates and when the officer holds her hand, Shireen kicks him out of the house.