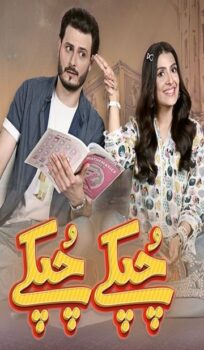 The head of two families, Naik Parvar and Bakhtoo, living as neighbors are the grandmothers who happen to be co-wives of late Nawab Sahb. Despite their individual rivalries, their families enjoy good relations. Fazi is unmarried as his sisters always reject the girl. Hadi his cousin, too is unable to find a perfect match. Meenu is a university student who hates studies but is tutored by Fazi.

Hadi’s proposal is declined again and Mishi’s cramp in foot delays Fazi’s proposal as well. Meenu discovers Fazi’s affair and informs her family excitedly. She is shocked to see Fazi unaffected while his family continues seeking proposals for him. Mishi seems interested in Hadi who is friendly towards her.

Fazi is furious at Meenu for spreading rumors about his affair. He explains to be in contact with his other sister Rumi. Hadi’s family including Naik Parvar and Meenu are elated as his alliance is fixed to a Canadian national girl. It however saddens Mishi. Meenu tricks Fazi into giving her some money which gives rise to new comic trouble.

Meenu apologizes to Fazi for lying to take money. A woman comes to Fazi’s house to ward off evil eyes but steals stuff instead. A proposal arrives for Fazi to which he agrees. The guests come across Meenu and want her hand in marriage for their son as well.

Meenu is excited to receive a proposal and starts her wedding preparations. Both families are happy with the alliance. Mishi’s tensions diffuse as Hadi is informed that his bride is already married and he won’t be tying a knot with her.

Hadi is upset as his future dreams are shattered but Mishi dreams of marrying him. Her fishy talks confuse Hadi. Fazi goes to lunch with his fiance, Hania that angers the women of the house. Naik Parvar screams at a nightmare and asks the family to refuse Meenu’s proposal.

Meenu feigns epilepsy attack to avoid her studies. Hania visits Fazi’s house where the sisters make n uncomfortable situation by constantly keeping an eye on them. Gul and Amma have an argument as Gul opposes Fazi’s relation due to his immediate closeness with Hania. Things seem to change positively for Hadi and Mishi. The family finally agrees to Meenu’s wedding.

Fazi secretly takes Hania to shopping while avoiding the family eyes as he had promised Gul not to contact his fiance before marriage. Mishi cries over her proposal but Naik Parvar promises to support her. The wedding preparations are in full swing after the marriage date for both Meenu and Fazi gets fixed. Ashar, Meenu’s fiance is shocked and upset to see her childish behavior.

Fazi is caught with Hania in the mall. Meenu makes a sweet dish for Ashar and reaches his office but Fazi spots her. Mishi indirectly expresses her feelings to Hadi and overhears him speaking about not feeling the same way. Meanwhile, the family is pissed at the continuous arguments between both grandmothers.

Meenu gets excited when her fiance, Ashar wants to take her out for shopping. The growing closeness between Hania and Fazi disturbs Gul as she feels Fazi to be slipping out of her hands. The cute little scenes between Mishi and Hadi sure give a clue to the new love story. Ashar is extremely annoyed at the childish behavior Meenu displays during shopping.

Hadi scolds Mishi regarding her feelings though he himself seems disturbed upon hearing about her engagement. Gul wants Fazi to end the relationship with Hania but quietly plays a few tricks to do it herself. Meenu discovers Mishi’s feelings through Mirchi and promises to help her. Waleed leaves the house for his match without anybody’s knowledge.

Waleed leaves the house for his cricket camp without anyone’s knowledge. Wedding preparations are in full swing but happiness is short-lived when Ashar’s first wife makes an entry and exposes the betrayal to the whole family. Meenu and Fazi’s weddings with respective fiances are broken. Naik Parvar and Bakhtoo console each other and think of ways to save the family’s reputation.

Fazi and Meenu are married to save the family’s respect much to their chagrin. Naik Parvar and Bakhtoo later regret the decision. Fazi is annoyed with Gul for ruining his life. The bickering between the couple continues while both grandmothers get worried about their happiness. Meenu fails again and screams as a thief breaks into the house.

Waleed returns home and bursts into laughter at the marriage situation. Gul instigates jer grandmother who then fights with Naik Parvar. She further announces to the family to not proceed with Fazi and Meenu’s relationship. Hadi is furious at the whole situation but the bitterness between newlyweds seems to be resolving.

Love is in the air between Hadi and Mishi. Fazi and Meenu meet outside where he saves her from goons and they share some close moments. Mani, the husband of Rumi makes a chaotic entry and keeps arguing with Miskeen. Hadi and Mishi are disturbed as Naik Parvar fixes Hadi’s alliance.

Fazi and Meenu express liking for each other and don’t want a divorce. As Gul and Naik Parvar go to decide the wedding date, Bakhtoo refuses for marriage much to everyone’s shock. Mani suspects Hadi and Mishi’s relation. Hadi promises Meenu to sort things out although his own love life seems to be in trouble.

Hadi vents out his anger at Mishi for not being able to handle the situation and misunderstands Fazi as he gets out of Meenu’s room. Waleed has an affair with Jannat. Mirchi hears Meenu talking to Fazi about eloping. As Meenu leaves for a friend’s house forgetting her mobile at home, Mirchi reveals the eloping idea.

Both families create chaos as they believe Fazi and Meenu have run away. Meenu shows up and the matter is cleared. Late Nawab Sahib’s elder brother, Taya Jee makes an entry and scolds the ladies for their continuous bickering. He orders to start wedding preparations. Meanwhile, Hadi’s mother talks rudely to Mishi for spending time with him.

Gul instigates Naik Parvar who goes to argue with Bakhtoo. Seeing no other solution, Taya Jee sends Meenu to Fazi’s house to complete the Rukhsati ritual. Mirchi goes to meet Meenu but Gul scolds and sends her away. Hadi and Mishi argue over the situation. Gul is enraged at Fazi for bringing Meenu and wants him to send her back.

Both families are in a mess as Mirchi is nowhere to be found. Mirchi files a report against Gul for her actions. Taya Jee sorts out the mess. Meenu is hurt as Gul cancels the reception. Hadi and Mishi are worried about their future. Taya Jee decides to get Hadi married to Natasha within a few days.

Hadi’s mother is shocked and angry to find his feelings for Mishi. Fazi and Meenu argue over the sisters’ drama at the house. Meenu cries and shares her worries with her siblings while Gul doesn’t refrain from her actions. Hadi sends the newlywed to a secret dinner and takes Mishi on a date too where he catches Waleed with Jannat.

Fazi and Meenu are caught by Rumi and her husband and get into a minor accident. Meenu is frustrated at the whole situation and goes back to her house. The couple is annoyed at each other. Hadi’s attempts to talk to Taya Jee about his relationship with Mishi are unsuccessful. While Mishi herself is worried about her new proposal.

Fazi is furious after discovering the relationship between Mishi and Hadi. Both are hurt as Fazi and Hadi’s mother insult them. Hadi is still adamant to marry Mishi. Gul tries to stop Fazi as he plans to take Meenu on honeymoon despite the fact that they keep bickering on and off.

Fazi and Meenu continue their arguments and are annoyed at no progress in their relationship. Bakhtoo is furious at Mishi and asks Fazi to get her married as soon as possible. The newly-wed couple finally get a few minutes alone to share a sweet moment together that is interrupted by Rumi.

Fazi, annoyed as Meenu shifts to Amma’s room when Gul insults her. Hadi tries to commit suicide but is saved by Taya Jee. Both grandmothers blackmail Mishi and Hadi with their lives to forget each other. Meenu tries to make up with Fazi who remains angry. The family is happy to hear about Rumi’s pregnancy but feels sad for Gul for being childless even after five years of marriage.

Fazi throws Meenu out of the house as she had hidden Mishi and Hadi’s relationship. Mirchi spreads fake news about Fazi slapping Meenu that boils Hadi and he creates a scene at Fazi’s house spoiling Mishi’s proposal as well. Mishi talks in private with Taya Jee and Meenu slams Mirchi for her actions.

Mishi is hurt and leaves the house. Fazi decides to divorce Meenu as per Gul’s orders. Meenu cries and vents her anger at her family for ruining her life. Jannat breaks up with Waleed stating to have no future with him. Mishi blames Hadi for creating a crucial situation for her. Hadi thinks of ways to settle everything when he sees Meenu crying.

Mishi, in her letter, blames Gul for the whole chaotic situation and Miskeen tries to warn her about the same. Fazi fights with Hadi for hiding Mishi and Taya Jee is enlightened with the whole situation. He challenges Hadi to bring Mishi within 36 hours or marry Natasha otherwise. Meenu is distraught and berates the whole family for making the relations a joke.

Meenu bursts into anger in front of her family and decides to leave Fazi. Hadi looks for Mishi everywhere but in vain. He reconciles with Fazi and tries to talk to Meenu but she is adamant about her decision. Fazi blames Gul for everything and she decides to go to her in-laws. The family is hurt and surprised at the mature and changed personality of Meenu.

After all the chaos, Gul realizes her mistakes and is blessed with the news of pregnancy. Hadi is unhappy with marriage but is elated to find Mishi as his bride and discovers it to be a family planning. Fazi is surprised to find that the separation decision by Meenu was a wake-up call for him planned by Hadi. Both grandmothers end their differences and the favorite show of Pakistan comes to a happy end.