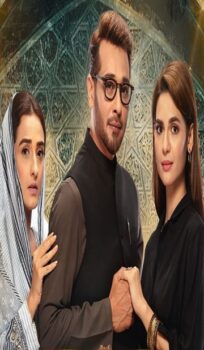 Below is the episode-wise story of the drama ‘Dil-e-Momin’. First, let’s look at the characters played by the cast:

Momin is a quite religious person and a lecturer at a university who loves his cousin, Aashi. Their families are aware of their love as well. However, Aashi’s father, Jameel doesn’t like Momin and his family. Maya and Gohar are students at the same university. Gohar is in love with Maya but Maya considers him only a friend. Maya faces Momin’s rebuke for coming late in the class. Momin’s sister, Fari and Waleed are engaged to each other.

Maya feels attracted towards Momin and throws a welcome party. She lies about inviting all teachers of the department. Momin doesn’t show up as Gohar accuses him of trying to win a student and he also finds out about Maya’s lie. Aashi is worried about her father’s attitude towards Momin’s family. She also feels insecure by seeing girls around Momin all the time. Momin is shocked as Maya expresses her liking towards him.

Fari’s marriage date is decided. Aashi’s mother gets upset as Jameel doesn’t inform her about the invitation to Fari’s proposal. Momin’s parents wish to fix Momin’s alliance with Aashi. Maya doesn’t like her father who left his family seven years ago. She expresses her love again for Momin but he ignores her. She keeps texting him but Momin doesn’t respond. Thinking of Maya as Aashi, Momin accidentally expresses his feelings to Maya.

Maya is happy to think that Momin returned her feelings and shares the news with her friends. The news spreads rapidly enraging Gohar who questions Maya about the whole situation but she taunts and sends him away. He informs the same to Maya’s mother who worries for her. Jameel has one more reason to dislike Momin after Momin helps a man who took a loan from Jameel. Gohar finds Momin’s address to meet him.

Gohar reaches Momin’s house, runs into his parents in the street, and asks him if he is getting married willingly. Momin’s proposal gets rejected by Aashi’s father as he has fixed her wedding somewhere else. After hearing about the refusal, Momin reaches Aashi’s home where Jameel blames him for shaming him by sending money through Shakir. Momin is quite upset and doesn’t return home as well. Seeing everyone tense, he buckles up and asks everyone to have faith in Allah.

Gohar mocks Momin about flirting with Maya. Maya presents a rose to Momin and gets scolded by him. He clears up the whole misunderstanding to her and Maya leaves angrily. Molana Sahab tries to convince Jameel regarding Momin’s proposal but gets insulted in return. Out of fury, Jameel decides to get Aashi married to her cousin. Gohar and Maya argue over loving someone. Maya curses Momin to suffer in love.

Aashi reminisces about her moments with Momin who is unable to forget Maya’s curse. Zehra revisits Aashi’s house to convince her father but is shocked to see Aashi getting engaged. Momin gives it a try and Aashi asks him to take her away but he refuses. She scolds him but her mother makes her understand Momin’s helplessness who is a brother of two young girls. Maya stays upset over Momin and doesn’t share her concerns with her mother.

Maya takes leaves from her institute as she is still upset over Momin. Momin gets upset as Maya’s friends inquire about Maya. Waleed takes out Fari and Zehra for shopping with his mother. He spots a man teasing a girl and Zehra is shocked to recognize him as Aashi’s fiance, Fakhar. She shares it with Shahzad who allows her to talk to Ansa. As Zehra is to tell the truth about Fakhar, Jamil misbehaves. Momin cries in front of Imam Sahb about being affected by the curse.

Aashi is irritated by the continuous calls of Fakhar and complains to his mother. Fakhar thinks it to be Zehra’s fault and talks to Jameel who insults Momin’s parents. Maya is elated as Momin visits her house, apologizes for the whole confusion, and requests her to focus on her studies by joining back the institute. Maya’s mother talks about Momin to Gohar who decides to handle the matter on his own and follows Momin to Ainee’s institute.

Gohar asks his men to kidnap Momin while Ainee keeps waiting for him. Out of fear, she walks alone and Gohar blocks her way. He threatens her about Momin’s actions regarding Maya. Momin is released and takes his sister back home who stays traumatized but doesn’t say anything. Maya keeps dreaming about Momin and thinks that he is serious about her. Ansa is worried as Fakhar is a loafer but Jameel doesn’t budge. She tries to inquire from Zehra who requests her to save Aashi. Momin scolds Maya for spreading the news of his visit in the university after receiving Gohar’s taunts.

Annie reveals to Fari how Gohar blocked her on the way back home and instigated her against her brother. Fari mistakenly thinks of Fakhar to be the culprit rather than Gohar. Meanwhile, Momin also accidentally blames Maya to be the one spreading rumors about him visiting her at home. After getting to know how Gohar was spreading those rumors behind the scenes, Maya severely rebukes him. Fakhar pays a visit to Aashi’s home where he misbehaves with her and later on lies to his uncle about how the mother and daughter mistreated him. Ansa begs Momin to save her daughter from the fate that awaits her.

Depressed from seeing Aashi and Ansa’s helplessness, Momin hesitates over whether to marry Aashi without Jameel’s consent. Seeing his son so desperate, Momin’s father, Shahzad decides on the last peace talk with Jameel. Contrary to his hopes, Jameel still bears many grudges in his heart and so he turns down Shahzad’s plea. Truly disappointed, Shahzad threatens to gather the locals to reach a consensus regarding Momin and Aashi’s matter. Waleed warns Fakhar to stay away from his in-laws while mistaking him for the one who harassed Annie. Imam Sahb promises Shahzad to shed light on the topic of daughter’s rights in Islam in the Friday prayer hoping for Jameel to come and get enlightened.

Fakhar narrates to Jameel and Ansa the incident where Waleed threatened him over Annie’s matter. Ansa remains suspicious of Fakhar which irritates her husband and so he almost gives her divorce. Fortunately, Aashi intervenes and stops Jameel from divorcing her mother. On the occasion of Friday prayers, the Imam Sahb gives a sermon regarding the rights of daughters in the matters of marriage which puts Jameel into thinking. Later, the dignified members of the neighborhood have a chat with Jameel regarding his daughter’s marriage and request him to abandon his stubbornness. However, he guarantees how his daughter has already agreed to marry Fakhar which puts Shahzad in a dilemma. Afterward, Aashi reinforces Jameel’s statement under the threat of her mother getting divorced. Momin confronts Aashi and demands the reason behind her giving up on them but all she says is that it’s too late now. Annie and Fari get a glimpse of Gohar while outside and so acknowledge the fact that it wasn’t Fakhar who blocked Annie on the way back home previously. Momin gets ill and skips university which makes Maya worried for him. She keeps dialing his number all day but Momin doesn’t receive a single one except for the time when his mother answers the phone and listens to Maya’s complaints. Maya’s mother wishes to marry her cousin, Saif after her daughter gets married. Meanwhile, she allows Maya to invite Momin for dinner to give him a chance and cheer up her daughter. Momin however, sees it as an insult and refuses to go.

Fari apologizes to Waleed for having wrongly blamed Fakhar and getting Waleed involved as well. Fakhar invites Aashi’s family to his home while he himself sneaks off to her house at the same moment, precisely when she’s all alone. There, he tries to harass her but Aashi manages to run away, and later, Shahzad, Jameel, and Ansa come along as well. Infuriated, Jameel beats the hell out of Fakhar and kicks him out of his house. Fakhar’s mother is utterly disappointed at her son’s lecherous deeds. Jameel reestablishes the marriage agreement between Aashi and Momin. Meanwhile, butterflies are fluttering in Aashi’s stomach at the thought of marrying Momin while Momin himself isn’t any better off after hearing the good news. Soon after, both get engaged. After Momin decides on giving a treat to his colleagues, Gohar also discovers about the engagement which immediately refreshes his mood. Maya, however, is still skeptical of the matter’s truth after listening to the news from Gohar’s mouth.

Fari and Aashi come across Fakhar while out at shopping. While Fakhar is blocking Aashi’s way, Momin arrives as well. He gets enraged after listening to Fakhar’s cheap talk and gets into a scuffle with him. The security team separates them both. Back at home, Aashi is worried about Momin’s opinion of her. So, she sends over her mother to clear things up. However, Momin is irritated by Aashi’s move as he has never doubted her. Maya’s mother is confused at her daughter’s persistence despite Momin getting engaged already. Maya, however, is in no mood to talk about it. Instead, she’s angry at Gohar for sending updates to her mother. At that moment, Momin passes by and so Gohar confirms the news of engagement from him. Maya still disagrees to believe it, saying that Momin is doing it all to get rid of her.

Momin stumbles upon Maya in the shopping mall. Coincidentally, Jameel is there as well and witnesses Maya taking selfies with Momin. Can’t stay at home, he shares his concern with Ansa. Despite refuting her husband’s doubts, Ansa still visits her sister’s home for confirmation. Momin’s mother is irritated by the subtle interrogation. However, she is put in thought when reminded of Maya’s previous call that she received. Annie also accompanies Ansa to her home. There, she hears over Jameel’s suspicions of Momin when talking to his wife. Later, she gets reminded of Gohar’s accusations against her brother as well. Jameel states all his suspicions straightforwardly during Shahzad’s visit. Maya shows off her selfie along with Momin to her friends. While on a call, Aashi hears Maya talking to Momin and gets infuriated. Momin visits her later and after an emotional episode, Aashi gets convinced of his love for her. Momin goes looking for Maya at her home in order to settle things. Unfortunately, Maya is absent while her mother refuses to let him enter the house. Meanwhile, Maya is deep in thoughts regarding all her previous engagement with Momin.