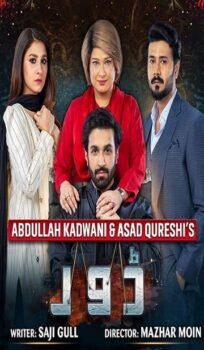 Below is the episode-wise story of the drama ‘Dour’. First, let’s look at the characters played by the cast:

Mrs. Ihtisham is an influential figure but hides the secrets of her dark past. Asma hails from a low middle-class family but is a bright student. Romaan, Mrs. Ihtisham’s son is hurt when his handicapped brother Abaan shouts at him. He is attracted to Asma when he hears her singing and hires her for an event which she happily accepts.

Asma’s father is asked by Mrs. Ihtisham to start his voodoo dolls performances again. Romaan is excited to see Asma at his place and supports her father when a guest tries to insult him. Abaan misbehaves with her and is scolded by Mrs. Ihtasham but fills her ears regarding the chemistry between Asma and Romaan.

Asma’s father, Sabir, faints while dealing with troubles caused by her elder daughter’s husband, Shaukat. Romaan comes to the rescue and Asma argues with her aunt when she suggests asking Romaan for money. Abaan’s condition worsens and he reminisces about a past, bitter memory after peeking into an old picture.

Abaan tries to commit suicide when his girlfriend leaves him due to his condition. The stress faced by Asma’s father because of his son-in-law affects his health and he is hospitalized. Romaan manages his hospital finances without Asma’s knowledge. Romaan’s mother is irked when Asma’s aunt shouts in the hospital.

Asma thanks Romaan for helping her father. Sabir sold his house to meet Shaukat’s demands who is having an affair. He throws Yasmin out of the house. Asma, with Romaan, goes to take her nieces from Shaukat where Romaan warns him to return Sabir’s money.