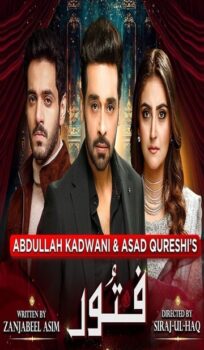 Dilnasheen is surprised by Hamza, her lover, who recently returned from abroad. She is later spotted by Haider and his mother at a function who are seeking a daughter-in-law. Haider who’s been suffering from heartbreak, recalls his past with his former lover and first cousin, Mehmal. Mehmal suffers at the hands of her neglectful husband.

Haider and Dilnasheen accidentally get locked inside a room where the latter freaks out. Haider becomes mesmerized by her beauty and asks his mother to talk to Dilnasheen’s family for her hand. Dilnasheen’s mother informs her about the wedding proposal but she refuses to marry Haider.

Dilnasheen informs Hamza about the wedding proposition. He talks to his parents about marrying Dilnasheen but they express that she doesn’t belong to their class. Hamza goes missing on purpose. His family insults Dilnasheen’s family and accuses her of trapping Hamza. Yawar slaps Dilnasheen for her affair with Hamza.

Yawar decides to accept Haider’s proposal. The next day, police shows up and arrests Yawar and Dilnasheen in front of their entire neighborhood. At the police station, the police officer reads out Dilnasheen’s and Hamza’s texts and embarrasses her. Hamza messages Dilnasheen to not worry and the police traces his new number.

Dilnasheen and Yawar reach home to find out that their mother noded to Haider’s family. Yawar hits Dilnasheen for bringing dishonor to the family and therefore house-bounds her. Meanwhile, the police brings back Hamza, who finds out how his parents behaved with Dilnasheen’s family. Hamza’s family tries to send him abroad but he refuses.

Dilnasheen’s family goes to meet her in-laws where the engagement date is set. Hamza waits outside Dilnasheen’s house and sneaks in when her family leaves. The two fight and later resort to convince their families one last time. Hamza begs his father who doesn’t listen to him. Meanwhile, Haider continues to recall his past with Mehmal.

On the day of her engagement, Dilnasheen bids farewell to Hamza. Mehmal attends the engagement and recalls her past with Haider which drives her to ask Ansab to care for her. Ansab sounds Mehmal that he will never care for her because he isn’t interested in her.

Haider takes Dilnasheen for their wedding shopping. Hamza follows the couple. Dilnasheen takes a stand against Hamza’s accusations who slits his wrist and ends up at the hospital. His father starts considering Hamza’s marriage with Dilnasheen for the sake of Hamza’s happiness.

Dilnasheen seeks forgiveness from her mother and brother before her mehndi. Hamza’s father and sister go to Dilnasheen’s mehndi and are thrown out by Yawar for bringing the marriage proposal. Dilnasheen finds out about Hamza’s medical condition and begs her mother to consider Hamza’s proposal but Yawar takes out a gun and threatens to kill himself.

Hamza gets discharged from the hospital and stays under the false hope that his father has worked everything out and goes to Dilnasheen’s house where he discovers the painful truth about Dilnasheen’s marriage. Dilnasheen sees Hamza at her wedding and marlries Haider. On their way to Haider’s place, Dilnasheen, Haider, and his family get into an accident with Hamza’s car.

Haider asks Dilnasheen to give her exam the following day and therefore, goes to her house to collect her books and uniform. Hamza confronts his family angrily, locks himself, and suffers from heartbreak. Ansab brings home another woman and Mehmal realizes her mistake of choosing Ansab over Haider.

Haider’s mother advises him to stay away from Mehmal and advises Mehmal to make amends with her disloyal husband. Haider and his mother meet Ansab who clarifies his intentions for Mehmal. Mehmal continues to pursue Haider so that he takes her back and reveals to Dilnasheen about her past affair with Haider.

Dilnasheen’s mother and mother-in-law advise her to stick close to Haider. Mehmal hugs Haider on purpose in front of Dilnasheen. Haider spends time with Mehmal’s daughter. Dilnasheen looks at Mehmal’s advances and starts to pursue her husband by asking about his likes and dislikes.

Dilnasheen cooks Haider’s favorite meal and dresses up in his liking of clothes, and also defends her relationship when Mehmal makes fun of Haider and Dilnasheen’s age gap. Mehmal pretends to fall down the stairs to ruin Dilnasheen’s dinner plans. Haider takes Mehmal to the hospital while Dilnasheen continues to wait for him at home.

Haider’ dinner with Mehmal infuriates his wife who informs her mother about Haider and Mehmal’s growing affection. Haider’s mother overhears Dilnasheen’s reservations and orders Mehmal to leave the house. Mehmal leaves the house and calls Haider who goes to pick her up.

Haider checks Mehmal into a hotel and goes home to see the situation. Dilnasheen gets closer to Haider who appreciates her gestures. She also weighs in whether to reveal her past to Haider and decides against it. To avoid any suspicion, Haider saves Mehmal’s contact number with a pseudo male name.

Mehmal asks Haider to stay the night at the hotel but he refuses and they have lunch. Dilnasheen takes her sister-in-law out for lunch and spots her husband with Mehmal going up to the room. She leaves Haider’s house but is advise later to return to Haider despite his actions.