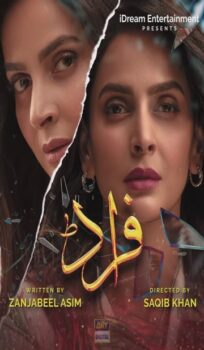 Below is the episode-wise story of the drama ‘Fraud’. First, let’s look at the characters played by the cast:

The drama begins with Maya having a nightmare about her wedding day. She is an obedient girl and a struggling fashion designer belonging to a middle-class family. Her younger sister, Maila is awaiting for Maya’s marriage to occur soon. Their mother Shehnaz is worried about her daughters’ marriage and keeps looking for proposals but her husband, Nisar rejects everyone. He wants to marry his daughters to elite families so they never face financial issues and lead luxurious lives. He is a kind-hearted person who has taken financial responsibility for his widow sister, Shazia. Shazia’s only son, Nael likes Maya and wants to marry her. After striving hard, he lands a decent job and asks his mother to take his proposal for Maya. When Shazia goes to Nisar to ask for Maya’s hand in marriage, Nisar abruptly refuses as he is not in favor of marrying his daughter to someone who does an ordinary job.

Shehnaz is mad at Nisar for rejecting Nael’s proposal and warns him that if keeps rejecting proposals over and over again, his daughters will remain single forever. The next day, seeing Nisar’s bewilderment, his colleague advises him to upload Maya’s profile to a matchmaking group on Facebook. Soon after Maya’s profile is posted, Nisar gets a message from a high-class family who wants to see Maya for their son, Tabraiz. Nisar is elated and very hopeful that Maya will be hitched to the type of family that he always desired. On the other hand, Nael is heartbroken as he is unable to forget the bitter words that Nisar spoke to him. In the next scene, an elite-class family is shown where a compliant and well-mannered guy, Shan struggles to keep the peace between his wife and mother. He is in despair after his wife flees to the US with her daughter due to his mother and sister’s cunningness.