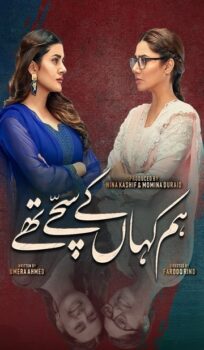 Below is the episode-wise story of the drama ‘Hum Kahan Ke Sachay Thay’. First, let’s look at the characters played by the cast:

Mashal, Mehreen, and Aswad are cousins plus best friends since childhood. Mashal’s mother manipulates her mind against her family making her believe inferior and unloved by others. Mehreen’s mother leaves her husband being a drug addict and his dead body is found at the house. They shift to her grandmother’s house with her mother marrying someone else.

Mehreen lives with her grandmother and earns well. A boy in college, Asfi takes interest in Mehreen but she and Mashal both like Aswad who is more in contact with Mashal. Aswad’s mother wants him to marry Mehreen but the idea is dropped and Mashal becomes the family’s choice.

Mashal keeps instigating Aswad against Mehreen and accuses her of smoking. Aswad blames her for leading the wrong life. Mehreen is hurt and returns home only to find her pet bird missing. Mashal throws her inhaler and Mehreen calls her friend, Safwan for help. She is enraged at Mashal for her insensitivity.

Mehreen accepts Safwan’s proposal for marriage. Aswad returns and is surprised to see the interior decoration and painting of Mehreen. Mashal makes him believe that Mehreen always steals her ideas. Aswad’s mother makes up her mind to make Mehreen her daughter-in-law. Mashal eavesdrops on Aswad’s conversation with Mehreen.

Mehreen meets Safwan’s mother who likes her instantly. She goes to meet her aunt but finds herself alone with Aswad. Mashal is enraged to see them talking and she expresses her likeness towards Aswad. Aswad, initially shocked, responds later. Mashal goes through Mehreen’s diary to set plots for her.

Safwan gets concerned about Mehreen when he receives an email from Mashal regarding Mehreen’s childhood. Saleha is upset with Aswad for choosing Mashal as his bride. Mashal is furious at Mehreen and warns her to stay away from Aswad who talks rudely to Mehreen for being involved with boys.

Aswad and Mehreen agree for marriage and get engaged. Mashal slaps Mehreen as a warning to stay away from Aswad but he breaks the news to her. Mehreen politely wraps things with Safwan explaining Mashal’s emails as a reason. The family asks Mehreen to reject the proposal but she stays firm.

Aswad is furious to find that Mashal’s family is blaming him for ruining her life. Sadia clarifies the whole situation to Mehreen’s mother, Rabia. Aswad shouts at Mehreen for asking to back out from the wedding. Mashal clears to Aswad about dragging out Mehreen from his life. She tears Mehreen’s wedding attire.

Mehreen is furious to see her wedding dress torn by Mashal. As per his mother’s wish, Aswad asks Mashal not to text or call him anymore. Mashal is found dead in her room after suicide. Mehreen is arrested for murdering her. Aswad asks Saleha to let the police do the investigation while Mehreen suffers in jail.

Mashal’s parents want Mehreen to be sentenced to death. Saleha wants to rescue Mehreen but Aswad acts rudely to her as he sees Safwan supporting Mehreen. Aswad breaks off his engagement with Mehreen and doesn’t trust her. Mehreen keeps suffering behind the bars and Safwan doesn’t leave her alone.

Aswad bails Mehreen out who is nearly attacked by Mashal’s parents. Aswad blames Mehreen for everything and asks Saleha to marry her off with Safwan. Mehreen faces an anxiety attack and berates Rabia for abandoning her. Aswad hears Mehreen talking to Safwan about moving on in her life.

Shabbo’s statement points towards Mehreen being the killer. Mehreen is confused as Saleha talks to Safwan about marriage. He proposes to Mehreen and they get engaged. Aswad is aggressive as all evidence is against Mehreen. He announces himself as Mehreen’s fiance when Safwan brings a proposal for her with his family.

Safwan is furious at Mehreen and breaks all ties with her when she leaves her house to go to him. Mehreen dejectedly marries Aswad who blames her for Mashal’s death and promises to punish her for the rest of her life. Saleha is apologetic to Mehreen for marrying her to Aswad.

Tahir reopens the case and the police come to arrest Mehreen. The situation is handled by Saleha who asks Aswad to come back. He scolds Mehreen for causing trouble. Mehreen’s grandmother misses her. Shabbo seems lost due to the whole situation. Mehreen imagines Mashal and gets scared when Aswad arrives.

Mehreen hallucinates Mashal and Aswad taunts her for her acting skills. Mehreen dolls up for Aswad but he insults her. Tahir finds out about Mashal’s habit of eating sleeping pills. Aswad nearly hits Mehreen as she refuses to apologize to Mashal’s parents. Aswad slaps himself for trying to hurt her. Tahir forgives Mehreen while Mashal’s mother wishes to attack Mehreen.

The hallucinations of Mashal keep haunting Mehreen. Sadia sees the torture faced by Mehreen and asks Aswad to divorce her. She contacts Safwan but he is getting married as well. Mehreen and Aswad refuse to divorce each other. Shagufta is mad at Tahir for taking the case back but he emotionally states about discovering the real reason behind Mashal’s death.

Shagufta is blamed by her husband for denying Mashal’s suicide and blaming Mehreen. Shagufta threatens Shabbo to refrain her from declaring Mehreen as innocent. Aswad spots Mehreen with Safwan as Saleha takes her out. He mocks her for trying to move on in life and hands over her shopping products to the maid. Shabbo stays worried about the mistreatment of Mehreen.

Mehreen tries to commit suicide but hallucinates her father instructing her to be strong. She gets a panic attack and is hospitalized. Saleha sends Aswad to bring Mehreen’s stuff from her old house. Aswad is shocked to find out all about Mashal’s lies through the grandmother and Shabbo. It turns out that Mashal mixed poison in Mehreen’s tea but accidentally drank it as cups got exchanged.

Shabbo pleads to Aswad to not expose her name to anyone. He breaks all ties with Mashal’s father who questions Shabbo and she gives a reality check to Shagufta about Mashal. Aswad cries and considers himself an animal for his injustice towards Mehreen. He calls and apologizes to Rabia as well. Mehreen expresses her wish for a divorce.

Saleha asks Aswad to divorce Mehreen but he wishes to talk to her first. Rabia is shocked to see Mehreen’s state and wishes to take her responsibility. Aswad narrates the whole truth to Saleha. Mahreen doesn’t wish to stay with Rabia who gives an earful to Aswad. Aswad apologizes to Mehreen who reminisces about her last conversation with Mashal.

Mehreen reveals to Aswad how she and Mashal had talked together emotionally before the latter’s death and had ended their clash which was caused by their elders through a continuous comparison between the two. Mashal later changed her plan of taking Mehreen’s life, apologized to her for everything, and accidentally drank the poisoned tea. Aswad apologizes to Mehreen and wishes to end his negativity.

Mehreen forgives Aswad after clearing all misunderstandings. She visits Mashal’s grave and starts her happy life with Aswad. She talks to her grandmother and Mashal’s parents about causing insecurities due to the continuous comparison between children. All broken ties are handled and the drama ends with the happy couple starting their new journey.