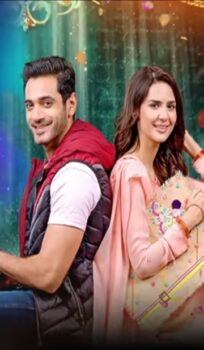 Bao Jee, the patron of the house lives with his daughter, son-in-law, and grandchildren, Basim and Bela; who are maternal cousins. Basim wishes to move abroad just like his uncles but is stuck in Bao Jee’s family business. Bela, an orphan secretly likes Basim and is the glue that holds the family together.

Bela gets sad when Basim sneaks out to meet another girl for his plan to move abroad. When his family finds it, he gets in trouble and makes it up to Bela by taking her out. Ashiq, Basim’s father, talks to his brothers-in-law and suggests them not to move back to Pakistan while Bao Jee misses his sons.

Basim fails his visa interview for America and his mother is elated. She talks about his wedding and future plans with Ashiq. Basim vents out his anger at Bela who steals a necklace kept for her dowry from Bao Jee’s closet in order to help Basim but he refuses the help.

Basim’s friend Rocket makes a fake report showing Bao Jee’s deteriorating health and sends it to his daughter abroad. Bao Jee misinterprets Ashiq and tells him to leave the house with his family. Bela becomes worried as her jewelry is stolen.

Bela and Basim make sure that no one gets to know about the missing jewelry set. Basim talks to his agent who suggests a contract marriage with a Canadian national. Later, he tells Bela about this plan who supports him and the two introduce the new girl to the family as Bela’s friend.

Hina, the Canadian national, meets the family as Bela’s friend and questions Bela about having feelings for Basim. Basim’s mother tells Basim to stay away from Hina. Everybody celebrates Bao Jee’s birthday when Basim and Bela’s uncle Sadaqat, aunty Sajjo, and son Vicky show up. Looking at the craziness of the family, Hina decides to secretly run away.

Hina runs away and accidentally takes Sajjo’s bag with her. Sajjo suspects that Bao Jee took her bag. Ashiq complains of Sajjo giving the family cheap gifts. Sadaqat continues to ask for forgiveness from Bao Jee.

Vicky recognizes Hina as a wanted fraudster from Canada. The family finds out and Sajjo creates a fuss over Hina stealing her passport while Basim lets Bela take the blame. Bela gets upset and when Vicky consoles her, Basim doesn’t like it. Later on, Bela goes out with Vicky.

Bao Jee is rushed to the hospital. Basim questions Bela for ignoring him when his mother overhears his paper marriage plans and slaps him. He blames Bela and becomes angry at her. Meanwhile, Sadaqat reveals to Vicky about Sajjo’s real intentions for returning home as the world gets into a lockdown situation.

Bao Jee overhears Basim talking about his paper marriage. They get into a fight and Basim leaves the house. Late-night, Bela goes to look for him and gets lost when a man attacks her. Their family worries for them and they return home safely. Meanwhile, Vicky hints at Bella about his liking for her and Sajjo plans to takeover Bao Jee’s property.

Bela overhears Sajjo’s real plans and falls ill the next day. The agent finds Sajjo’s bag and Basim’s money. Rafaqat, Basim’s elder uncle, arrives with his wife, Nikki, and daughter Isha, and Bao Jee doesn’t let them enter the house. During the commotion, Isha is accidentally left in the rental car and everybody worries for her.

Isha returns home safely and Bela notices her likeness for Basim. Bao Jee plans to fix Bela’s marriage with his friend’s grandson when Iffat mentions Basim as a suitable fit for Bela, but Bao Jee rejects him. Basim overhears Sajjo and records her conversation with Isha and Vicky about giving Basim and Bela expensive gifts. Later, he plays the recording for the whole family.

Bao Jee overhears Rafaqat and Sadaqat talking about selling his house and asking for their shares in the property. He reacts by naming the house after Bela which causes a commotion in the family. Basim takes out his anger on Isha and Vicky. Meanwhile, Bela tries to calm everyone down as her marriage talks become serious.

Bao Jee learns about Bela’s missing jewelry. Everybody searches for it as Vicky and Isha find out the truth. Isha suggests a plan to replace half the jewelry with the artificial one and Basim goes out to make the arrangements. He gets caught and lies that Bela gave the jewelry to her friend. Bela gets in trouble and Bao Jee goes to see a proposal for her.

Bela’s marriage gets fixed with Khokar’s grandson, Hassan. Basim protests against the relationship but Bela stays tight-lipped. Both fight and Basim ends up telling his mother the truth about Bela’s artificial jewelry. Meanwhile, Vicky talks to Bela about marriage and then asks for her hand from Bao Jee.

Bela shows no interest in Vicky when is enquired by Bao Jee. Vicky becomes sad for getting rejected. Everyone prepares for Bela’s engagement and Basim gets angry at everyone for hosting a function during the lockdown. Bela and Basim get stuck with a punctured tire when Hassan, Bela’s fiance and his mother spot them.

Hassan and his mother visit Bela’s house and meet the family. Rafaqat gets quarantined and Bao Jee gets worried for his health. Basim gets mesmerized when he sees Bela all dressed up for her engagement. Sajjo accidentally gets locked inside a beauty parlor and misses the event. Meanwhile, Ashiq informs the family that Rafaqat’s COVID report came positive.

The police barges in during the function and arrests the groom, Hassan for hosting a gathering in lockdown. Bao Jee goes to the police station to settle things down. Later on, Basim gets angry at Bela for talking to Hassan on the phone, and she counters by telling him to sacrifice himself for her. Meanwhile, everybody gets tested and Sajjo returns home.

Rafaqat is taken to the hospital and everyone prays for his health while Sajjo and Nikki focus more on precautions than Rafaqat. Hassan’s ring gets lost, and he uses that as an excuse to visit Bela. He makes Bela uncomfortable by holding hands forcefully and she runs out crying. Meanwhile, Isha tells Basim and Bela that they like each other.

Vicky decides to stay in Pakistan. Sadaqat too gets quarantined with Rafaqat. When Bela refuses to talk to Hassan, he conveys his grievance to Bao Jee who thinks Basim is brainwashing Bela. Misinterpreting the situation, he scolds Bela. Meanwhile, Isha takes Basim out for a drive.

Bela goes to Hassan’s house for lunch where she meets Hassan’s childhood friend, Annie, who turns out to be his first wife. Bela storms out and returns home crying. She remains tight-lipped when everybody asks her while Hassan’s entire family switches off their cell phones.

Bela returns Hassan’s ring to Isha who gives it to Baoji. Basim convinces Bela to reveal everything to him, and when she does, he informs Baoji, Ashiq, and Iffat. All become furious but let the matter go. Basim also does self-reflection to find out about Bela’s true feelings. Meanwhile, Sadaqat confides in his brother about cheating him ten years ago.

Bela vows to change the company name, in which Bao Jee had invested for her, just for the sake of Basim. Later on, Basim hints Bela about his future intentions for her, and spends much time thinking about her. Bao Jee’s sister-in-law, and everyone’s Phupo, Bazgha visits the family.

Basim expresses his feelings to Bela. Isha and Vicky try to break their marriage talks. Vicky and Basim get into a heated fight and Bao Jee finds out. Bela takes Vicky’s side which infuriates Basim. Sajjo overhears Bazgha’s plans to get Bela married in her family, to take over Bao Jee’s wealth.

Basim confesses his love for Bela and resolves to never leave Pakistan for her. Rafaqat and Nikki overhear Sajjo’s plans to get Bela married to Vicky to secure Bao Jee’s wealth. Meanwhile, Bao Jee suggests Isha be married to Basim instead of Vicky, so Basim could settle abroad. Rafaqat and Nikki agree to Bao Jee’s plans and insist him to talk to Ashiq and Iffat about the marriage proposal.

Bao Jee talks to Basim’s parents about his marriage with Isha to whom they agree. The news infuriates Bela while Basim argues with her for Vicky’s plans to join her business as a partner. Iffat asks Bela to convince Basim to marry Isha.

Everybody prepares for Basim and Isha’s engagement and Basim sounds Isha that he won’t go abroad. Bela overhears Bazgha talking about marrying her grandson, Gulfam with Bela. Bao Jee falls ill and is taken to the hospital. Bela goes to see Bao Jee where two men pretending to help her steal her car. Ashiq and Rocket find the car and bring it back.

Ashiq blackmails Basim into agreeing to marry Isha and going abroad. Sadaqat and Sajjo ask for Bela’s hand for Vicky, and Bazgha simultaneously asks for Bela’s hand in marriage for her grandson, Gulfam. Bao Jee asks Bela to agree to marry Vicky, as his last dying wish. Meanwhile, Bela and Basim get frustrated with the circumstances and vet out their anger at each other.

Hina shows up in the middle of the night, seeking help. Bela hides her, everybody finds out, and Hina accuses Basim of secretly marrying her. Moreover, Hina presents a fake marriage certificate that infuriates Isha and Vicky. Hina tells the truth and goes away after Basim threatens her to involve the police. Everybody plans Basim and Isha, and Bella and Vicky’s Nikkah.

Basim overhears Bela crying to her friend Sofia on the phone about her marriage. Later on, she visits Sofia where Basim shows up with Bela’s bangles that he once sold. Sajjo orders Bela’s wedding gown online which gets mixed up. Meanwhile, Rafaqat and Sadaqat insist the marriage to take place on Friday, despite knowing the unavailability of a Molvi during COVID.

Basim gives Bela her bangles but she refuses to take them. Bazgha spreads the news that Basim has brought fake bangles for Isha and everyone thinks those bangles are for her. Later on, Bazgha overhears Basim telling Bela that she still loves him and Bazgha tells Vicky. Meanwhile, the wedding gets delayed a week.

Ashiq and Bao Jee find out that Basim sold his car. They question him and Ashiq ends up slapping Basim which causes him to leave the house. While leaving, Basim misbehaves with Rafaqat and Isha, and Isha ends up revealing the truth to Bao Jee about Bela stealing bangles for Basim. Bao Jee locks himself and Bella tels off Basim for his misbehavior, hence, he returns home, apologizes to everybody, and agrees to marry Isha. Meanwhile, Bazgha’s grandson, Gulfam arrives.

Bao Jee transfers his property to Basim and Bela. Sajjo suggests Bela to accept the house and a share in the house. Bao Jee overhears the entire conversation, and breaks off the wedding. Vicky records a video of Bela confessing her feelings to Basim and shows it to Isha. Isha refuses to marry Basim and Gulfam’s marriage gets fixed with her. Later on, Bao Jee sees the video and confronts Bela and Basim, and fixes their marriage. Meanwhile, Sajjo seeks forgiveness from Bao Jee, and Basim apologizes to Vicky. Vicky and Sophia hint at their liking for each other. Finally, everybody enjoys Basim and Bela’s wedding. 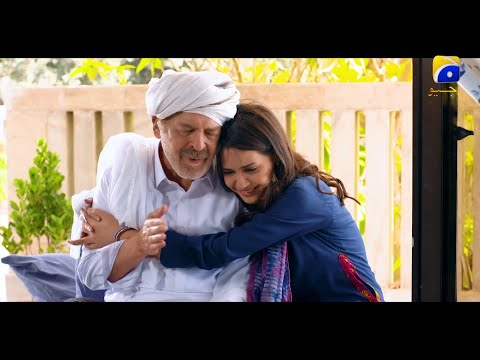 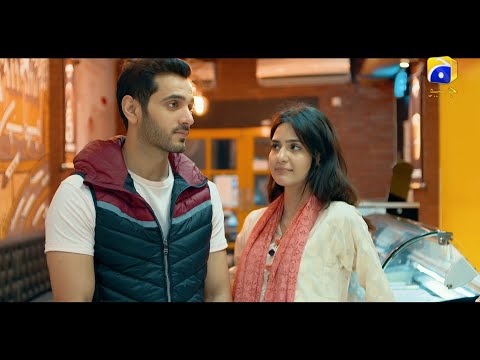