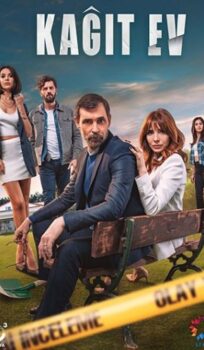 Aylin Fırtına is a successful lawyer who lives a happy life with her famous husband, Cihan Fırtına, and three children. Cemre Fırtına is a spoiled brat who often misbehaves with her mother and helper, İnci Yılmaz. Aylin’s son, Mert Fırtına and İnci are in love with each other. Azra, Cihan’s colleague seduces him and spends the night with her. Cemre is furious to discover through a phone call about her father having an affair. İnci presents a token of thanks to Cihan for his guidance as a teacher who hugs her as she is a daughter to him. Cemre perceives İnci to be the one trapping her father and vents out her anger resulting in İnci’s death by mistake. She is least upset by her actions. As the couple tries to bury the dead body in their garden without anyone’s notice, Cemre reveals how İnci deserved to be punished for trying to snatch her father.

Aylin asks Cihan to reveal the truth about İnci and he clearly states he had a father-daughter relationship and that Cemre misunderstood everything. Mert frantically searches for İnci but in vain. İnci’s family begs Cihan for help and he takes them to his cop friend, Bülent who starts investigating the case. It seems like Bülent suspects Cihan and Cemre but can’t seem to be serious due to family ties with him. Aylin misses İnci and slaps Cemre when she abuses the deceased. Cihan continues his affair with Azra and spends time with her again. Mert is depressed and asks Aylin to find İnci revealing her to be his girlfriend. Cihan’s friends want to dig the garden to beautify a scenario that calls for another trouble as it’s where İnci’s body is hidden.

Aylin shouts at Cihan for having relations with İnci when she was with their son. As Cihan talks about confessing to the police, she asks for forgiveness. Cihan argues with his friend when he talks about digging the garden and the couple decides to shift the body elsewhere. Azra decides to help Bülent and starts interviewing people about İnci. She suspects her brother who seems aggressive and won’t regret hurting İnci. Cihan argues with Aylin for not recognizing Cemre’s sickness. She later meets Cemre’s doctor who reveals that such murderous instincts are genetic. Aylin meets her father in jail who was also a murderer. As Cemre acts in a broadcast about being sad for İnci, Cihan rebukes her and decides to hand her over to the police. Cemre acts for a while making him change his mind and then laughs again. The couple tries to shift the body but meets with an accident.

The people who caused the accident take pics of Cihan’s car to pay for their damage the next day. Cihan and Aylin drop off İnci’s body at the shore and remove all evidence possible. They spend the whole night clearing the traces and also weep their hearts out at their actions in an attempt to protect their daughter who is enjoying herself. Cihan takes Cemre to the doctor to start her treatment. Azra reaches İnci’s house where her strict father already declares her dead and Azra finds out about Mert’s relation with İnci. Aylin’s father has been stalking them for thirty years and calls Cihan in jail after Aylin’s visit. Cihan is shocked to meet him and is requested by him to free him from jail. Azra broadcasts a show and reveals to everyone about İnci and Mert’s relationship putting him in trouble.

Mert is investigated but İnci’s mother, Gülsüm supports him. İnci’s father creates a scene outside Cihan’s house that angers Aylin. Mert begs his parents to search for İnci. A couple goes to enjoy near the shore and discover İnci’s body. The family is devastated at İnci’s death but Cemre shows no regret. Mert blames himself and social media also holds him responsible. All think it a suicide but Cihan explains it to be a murder. Azra and Cihan break up and she turns to Aylin for her case of her boyfriend being a fraud as he hid his marriage. İnci’s brother, Çetin kidnaps Cemre as revenge to teach Mert a lesson as he was involved with İnci which would have led to her death. Cemre boasts off in front of Çetin but plays a victim in front of Cihan. Aylin talks about Çetin committing a crime but Cihan defends him as Cemre killed İnci. Mert overhears the two talking.

Mert is devastated and rebukes his parents for their heinous crime. Cemre is scared when Mert decides to reveal everything to the police. She goes to him with a knife to warn him not to hurt their parents. She narrates the whole incident and the places where everything was performed. She weeps and begs him not to inform the police and he agrees considering her sick. Mert realizes his parents were involved since the beginning and leaves the house. He wants justice to prevail and let his parents feel the pain of losing the child. Çetin tries to find a job and invests money but is fooled. Bülent searches İnci’s house and Azra too promises her parents to stick to the case until the killer is found. Azra and Bülent talk about her case as she receives gifts continuously seeming to be stalked. Just as she is about to reveal the person she was having an affair with, Mert enters and confesses to Bülent about killing İnci.

As Mert takes the blame, Cihan and Aylin reveal the truth to Bülent about Cemre being the real culprit. Mert gives statements in a way clashing with those made by his parents, which causes confusion. Cihan helplessly reveals his affair to Bülent who is shocked as he had an interest in Azra and also considered Cihan his role model which led to a complete disappointment. Cemre plays other games showing no signs of remorse which adds to the existing troubles. Gülsüm is disgusted at Cihan’s family as she had served her whole life at a place that became a graveyard for her daughter. Aylin is ashamed of her actions and extremely furious at Cemre for making them land in such a situation. Cemre runs away as the police come to take her for testifying. Mert is jailed where he is to face some vicious people.

Mert is shocked to meet his grandfather in prison and discovers the lies of his life. Azra is attacked by the stalker but is saved by Cemre. The secret is revealed as Cemre finds her intimate picture with Cihan and goes crazy. She tries to kill Azra but is stopped in time by Bülent. Mert is released after a year but decides to live away from his family. By this time, Cemre has totally lost her mind and is under treatment. Cihan and Aylin have parted ways but are keen to take care of their children at all costs. It seems like Azra wants to make things right by asking Bülent out. Happy times now start for this new couple but one incident ruined the lives of a joyous family. It also seems that Cihan has entered himself into a world of crime by wiping the traces of a body leaving the show as a cliffhanger.