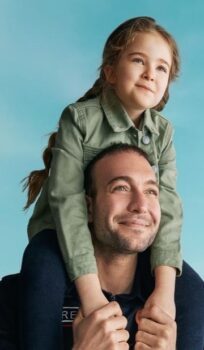 Below is the episode-wise story of the drama ‘Kahraman Babam’ in English. First, let’s look at the characters played by the cast:

Uğur is a firefighter who started this job after his wife died when their house was on fire. He is fighting for the custody of her daughter Ömrüm against Cem (her wife, Nilüfer‘s brother) who also has the same job. Zehra, the wife of Cem, instigates Ömrüm against her father which makes her believe that being close to her father would annoy her late mother.

Yonce, a psychologist, is involved in the case to inspect the living situation of Uğur. The daughter of Uğur’s commander, Menekşe is a physiotherapist assigned to treat Furkan, the son of a rich businessman. As Uğur saves another family from fire, he spots a man, Ozan, whom he thinks is involved in lighting the fire at his house resulting in his wife’s death. It seems like Furkan’s father also has something to do with the incident. As Uğur goes to confront the man, Ozan runs away and gets involved in an accident.

Ömrüm is elated at the thought of meeting her father but is dejected when he doesn’t show up. Uğur is behind the bars as a suspect of an accident but explains everything to the police who let him go but he is already late. Furkan seems to be interested in Menekşe but she is in love with İlker, a young worker of her father. İlker is caught outside the house by her brother, Mert, who beats him to pop. Menekşe handles the situation for a while but her brother is suspicious and she is taken aback when he arrives at Furkan’s place. Yonca’s fiance, Emre, sees the video of Uğur saving a man and discusses it with Furkan’s father. Ömrüm and he secretly go to see her at night infuriating the child’s uncle. The next day, Uğur breaks into the cell of another suspect involved in the fire to investigate him and strangulates him as he loses his temper.

Tufan confirms with his statement that he was involved in the fire incident resulting in Nilüfer’s death. Uğur runs through the window before being caught. Yonca rebukes him for his actions and he explains the whole story. She decides to help him and be his lawyer. Emre is furious as she misses spending time with him. Ömrüm is elated as Uğur shows up at the parent’s meeting. Murat is still angry at Menekşe and Mert. Menekşe’s mother discovers their relationship too but warns her daughter to end it. Furkan is taken aback as his father Yavuz fires Menekşe but she is saved by his mother Gönül. The couple sorts their differences and Gönül asks Yavuz to be considerate of Furkan’s feelings. She also warns Furkan to not be close to Menekşe but he has other plans and presents an expensive gift to Menekşe as a token of gratitude. Mert gets stuck in heavy fire and shouts at his team for help.

Mert is saved by İlker but he still remains rude to him. Mert’s father warns them about their behavior. Yonca is scared as the defender beaten by Uğur dies in front of her. It seems that Yavuz and Emre have something to do with the man and they handle the report to save Yonca from the whole situation. Zehra finds about Uğur’s visit to the school and is afraid of Ömrüm leaving them soon. İlker’s mother shifts in the neighborhood while Furkan tries to get closer to Menekşe. Yavuz visits the commander of firefighters for a business deal and finds that he is Menekşe’s father. Menekşe’s mother is taken aback to see an expensive gift that Furkan had secretly put in her bag. She reveals to İlker’s mother about Menekşe being in love with Furkan when she tries to ask for Menekşe’s hand for İlker. Yavuz appreciates Menekşe for her work and invites her family to dinner which baffles her as Menekşe’s mother made her lie about Furkan being a small kid and not a grown-up. Zehra sets a trap and doesn’t pick Ömrüm from school and lets her go with Uğur. She creates a dramatic scene and files a complaint against Uğur for kidnapping Ömrüm.

Ömrüm spends quality time with Uğur when Zehra brings the police and Uğur is arrested. Yonce advises Ömrüm to speak the truth while Zehra forbids her from telling the actual incident. Zehra falls sick the same night, loses her child, and is informed about never being able to conceive again. Cem and Uğur have a heated argument regarding the whole incident but get some time to wonder when they save another person from a car accident. Uğur feels bad after discovering Cem’s problem. İlker is enraged at Menekşe for lying about Furkan and she reveals the same truth to her father who asks for forgiveness for being strict and requests her to never lie again. Mert resolves his issues with İlker as well. The family visits Yavuz’s house and Gönül shares with Menekşe’s mother about stealing her locket. She is shocked to find it was Furkan who gifted it to her. Uğur investigates Mazlum’s case who changes his statement about the incident after dropping his weapons to poverty as advised by Yavuz. Uğur is given the notice to stay away from Ömrüm for three weeks. He is shattered for always being tested. Emre is furious to see Yonca pacifying him.

Menekşe is shocked to find through the housemaid that Furkan gifted his mother’s necklace to her. Yonca talks to Ömrüm and advises Zehra not to complete her loneliness by separating the child from her father. Yavuz offers a job to Menekşe‘s father making him furious and the family leaves before dinner. Mert warns Furkan to keep a distance from Menekşe. İlker and Menekşe patch up while Furkan is upset at the thought of Menekşe being involved with someone else. Cem wants Zehra to consult a psychologist and move towards a new life but they end up having a heated argument. Ayse helps Ömrüm and Uğur meet but they are spotted by Cem. She investigates her husband’s financial situation and finds the woman he took out a loan for. Emre tracks details about Uğur and involves him in a criminal incident. Yonca seems to be happy being close to Uğur. Cem files a complaint against Uğur having broken the court’s order. Menekşe ends things with Furkan as he enrolls her into an art course to make up for his previous mistakes. She finds her father worried with a note in his hand when she reaches back home.

It turns out that the commander has been helping his wife’s sister, Gülshah. Ayşe seems to be highly offended due to her clashes with Gülshah and accuses the commander of disloyalty to which she receives a warning. Furkan is punched by Murat for visiting Menekşe. İlker is slapped by the commander as he confesses about his relationship with Menekşe and their desire to get married. Emre instigates Yonca against Uğur by showing her a clip of him burning down a car. Yonca shows it to the commander and Cem who join hands with Uğur in his search to find the killers of his wife. Cem notices sadness in Ömrüm’s life and makes her meet Uğur. He mends his own relationship with Uğur as well. Due to this, he and Zehra argue where he states some bitter facts about her personality and asks for a divorce. Zehra leaves the house. Yonca ends her relationship with Emre when he pressurizes her about Uğur and other stuff. Orhan, the culprit firefighters were chasing, is caught. Yavuz extracts information about firefighters and finds it to be a revenge scheme by one of them which is Uğur, who is able to track down Yavuz’s office.

Yavuz makes Emre disappear when Yonca discovers Emre’s criminal personality. Cem takes a stand for Ömrüm against his parents, drops the case and hands her over to Uğur. Yonca steps back from Ugur’s case to take some mind off of chaos and shares an intimate moment with Uğur when she meets her for the last time. Menekşe gives an ultimatum to Furkan when he is adamant to bring her back. The parents give their consent for İlker and Menekşe and arrange an engagement at a friend’s house and Yavuz decides to end everyone together. Yonca is shocked to find her brother’s truth through Emre’s dad. As the celebration starts, the house is put to fire. It is known in the ending scene that police arrived in time as per Uğur’s instructions, saved everyone and arrested Yavuz. Ömrüm now lives a happy life with her hero father who captured the villains and saved everyone at the end.