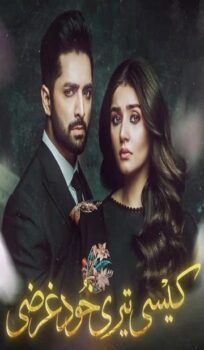 Below is the episode-wise story of the drama ‘Kaisi Teri Khudgharzi’. First, let’s look at the characters played by the cast:

The episode begins with a beautiful, innocent girl, Mehak, and her younger sister, Nida preparing a surprise birthday party for their father. Their father is a university lecturer and a very affectionate husband to his wife, Naheed. Mehak is engaged to her paternal cousin, Ahsan who also happens to be her neighbor. Ahsan’s father, Rehan is a doctor at a government hospital and his mother, Andaleeb is a nagging woman who always taunts her husband to earn more. One day, while dropping his daughters to university, Mehak’s father encounters Shamsher misbehaving with a boy on a street. He attempts to stop him but as a result, Shamsher points a gun at him. Mehak quickly pulls her father back to blow off the steam. Just then, Shamsher sees the gorgeous Mehak and falls in love with her instantly. Shamsher is an ill-mannered macho and a son of an influential and corrupt politician. Later, he uses all his powers to find out about Mehak and finally goes to her house to meet her.

Shamsher arrives at Mehak’s house in full swing to ask her father, Akram for Mehak’s hand in marriage. Akram straightaway refuses and asks Shamsher not to tarnish their respect in the neighborhood. But Shamsher turns a deaf ear to them and threatens to pick Mehak if they don’t agree to the proposal. Upon knowing that Shamsher made a spectacle outside Mehak’s house, Ahsan fumes with anger and suggests reporting Shamsher to the police but Akram advises against it. Andaleeb tries to accuse Mehak of having a past association with Shamsher. Shamsher goes on with making Akram and Mehak’s life difficult. First, he sends a donation cheque to Akram’s university to buy him off. Later, he barges into the university to meet Mehak and ends up beating the boys who try to protect Mehak from him. On the other hand, Shamsher’s father, Nawabzada Dilawer is worried about Shamsher for not taking part in the family business like his obedient elder son, Tara.

Through Shamsher’s financial power, Akram is arrested from his house in front of the entire neighborhood. Mehak along with Rehan and Ahsan rushes to the police station to get Akram bailed but their request is turned down by the inspector who is a puppet of Shamsher. Having no other choice, Mehak calls Shamsher to make a plea for her father’s bail giving Shamsher’s ego the much-needed boost. Soon, Akram is released from jail at Shamsher’s command. Naheed advises Akram to conduct Mehak and Ahsan’s marriage ceremony as soon as possible to get themselves out of this mess. Tara’s wife, Farwa informs Dilawer about Shamsher’s poor choice of girl and Dilawer straightaway refuses to allow his son to marry a girl outside their league. Shamsher arrives at Mehak’s house unannounced and gives Akram one week ultimatum to marry Mehak off with him or else he will not think twice before abducting her.

Andaleeb commands Ahsan to stay away from Mehak as she does not want her son carrying Mehak’s burden of defamation for life. Afraid of Shamsher’s warning, Akram appeals to Rehan to conduct Ahsan and Mehak’s Nikah ceremony within a day. Rehan hesitates to marry his son in a haste but Ahsan instantly agrees. Ahsan makes Mehak realize his love for her and assures her that he will combat anything that comes their way. Andaleeb is mad at Rehan for going against her decision and somehow rats out the news of Mehak’s marriage to Shamsher. Enraged, Shamsher arrives at Ahsan’s house and abducts him. Dilawer finds out about Shamsher’s actions and orders Tara to get rid of Mehak. Unable to see his brother’s sorrow, Rehan promises Akram to continue with the marriage ceremony as soon as Ahsan returns. Shamsher frees Ahsan and as per his instructions, Ahsan arrives home only to inform Mehak that he won’t marry her.

Mehak’s heart breaks into a million pieces after Ahsan refuses to marry her. Shamsher calls Mehak making it clear that she has no other choice but to marry him or else he will cross all the limits to acquire her. Thinking that Mehak’s family is interested in Shamsher’s wealth, Dilawer asks his wife to go talk to Mehak’s family and end the situation affluently by feeding them money. Shamsher’s mother arrives at Mehak’s house along with Farwa. Farwa humiliatingly hands Mehak’s parents a blank cheque, asking them to stop pursuing Shamsher once and for all. Unable to stand her parents getting mortified, Mehak throws a glass of water on Farwa’s face and tears the cheque, asking her to leave immediately. Farwa is enraged and desperately wants to take her revenge. So, she portrays Mehak and her family as evil in the eyes of Shamsher. Meanwhile, Akram decides to skip town with his family for a few days.

Shamsher goes to Mehak’s house only to discover that she along with her family has fled away without informing anyone. Meanwhile, Mehak’s family arrives at Naheed’s sister’s house, who runs a catering business, to stay there for a few days and keep themselves away from Shamsher’s reach. Shamsher goes to Mehak’s university to obtain any kind of information regarding her but only finds her leave application. He exhausts all possible ways to find her but finds no clue which makes him feel dispirited. Shamsher’s mother informs her husband that Farwa wants to set her sister up with Shamsher. Dilawer couldn’t be happier to know this as he wants to bring a daughter-in-law from a high-class family, equivalent in status to Farwa. On the other hand, while having a homemade lunch at his friend’s house, Shamsher coincidentally finds Mehak’s handwriting on a meal box that leads him directly to Mehak’s location.

Mehak is flabbergasted to see Shamsher on her doorstep. He intimidates Akram that he will return within three days to carry out the nuptial with Mehak. Before leaving, he warns Mehak to refrain from trying to run away or else all her family members will be victims of death. Dilawer fumes with anger after Shamsher invites him to his wedding. He threatens to disinherit him from his wealth but Shamsher turns a deaf ear to him. Seeing her family suffering, Mehak reluctantly gives in and informs Shamsher that she is ready to marry him. Later, her family returns back to their home. Ahsan apologizes to Mehak for betraying her but she refuses to accept his apology. When Dilawer realizes that Shamsher is ready to lose everything to attain Mehak, he seemingly agrees with his decision. Farwa decides to leave the house as she cannot tolerate a middle-class girl competing with her in status.

Akram and Naheed are in agony for their daughter and can’t stop thinking of ways to evade Shamsher. A day before the wedding, Shamsher stops by Mehak’s house to drop off gifts and Mehak’s wedding dress. While he is over the moon, Mehak feels miserable and helpless. Dilawer secretly hatches a plan with his right hand, Sheru to destroy Shamsher’s wedding. Later, he convinces Farwa to come to the wedding after assuring her that Mehak will never become the daughter-in-law of the house. On the wedding day, Mehak’s parents feel embarrassed for pushing their daughter into a hellhole and apologize to her. Upon Shamsher’s insistence, Mehak goes to a salon to get ready for her wedding. When Shamsher arrives at the venue with his family, he is furious to see that Akram has not invited anyone. On the other hand, while Mehak is on her way to the venue, Sheru crashes a truck into her car and then sets the car on fire to ensure Mehak’s death.

Shamsher and Akram lament the loss of Mehak as they see her car burning to ashes. Dilawer and Farwa are more than happy with the situation and are hopeful that Shamsher will forget Mehak soon. Naheed is in extreme anguish as she can’t believe her daughter’s unfortunate death. Farwa brings her sister, Sofia to the house so she can flit around Shamsher and help him get over Mehak once and for all. Rehan calls Akram in the middle of the night and summons him to an abandoned house. Upon arriving there, Akram’s heart skips a beat seeing Mehak alive, in flesh. He can’t stop shedding tears of happiness. Rehan suggests keeping the news of Mehak’s survival confidential and sending her away to Multan to his friend, Noman’s house. As Mehak arrives in Multan, Sheru wonders to see her alive and fails to catch her.