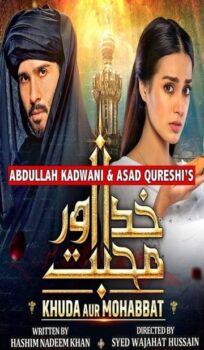 Farhad does not enjoy much recognition in his family as he has failed to graduate despite multiple attempts owing to his lack of seriousness in the studies. While his studious elder brother Sajjad is the center of attention in the family. Their father, Taufeeq, a government superintendent has high hopes for Sajjad but is concerned for his younger son’s future.
Mahi comes from Bahawalpur to Lahore along with her sister-in-law to attend her friend Rida’s marriage. At the railway station, a shuffle of travel baggages brings her in front of a wealthy young man, Taimoor who earlier had been warned by a rapt to avoid the journey or to be ready for dire consequences.

Farhad faces the wrath of his father for not appearing in the exam. He is sent to work in Seth Nisar’s mansion who needed a man for Rida’s marriage arrangements. There he meets Mahi who at first mistakes him as a guest coming from Canada and then teases him knowing his reality. Farhad works tirelessly to win Seth Nisar’s confidence. Meanwhile, Mahi is also impressed and offers her friendship though apparently to use him for arranging a meeting between Rida and her fiance.

Farhad starts daydreaming when Mahi offers him friendship. He escorts Rida and Mahi to Faris’s birthday party. They return home safely without raising any suspicion within the family. Naheed spots Farhad on his way back and starts fearing losing her love.

Farhad gets full appreciation from Seth Nisar for the hard work he has done in Rida’s marriage. His efforts to express his feelings towards Mahi go in vain as she misunderstands him. Naheed is heartbroken by the continuous rejection from Farhad. Going back to Multan and his family, Taimoor hints at sending a marriage proposal for Mahi.

Mahi leaves for Bahawalpur as her father Kazim Shah summons the girls home. Farhad at first is shocked to learn the news but then decides to chase his love. Leaving his family and poor Naheed in tears, he reaches Bahawalpur where he faces the strict landlord Kazim Shah and his son. Taimoor narrates to his mother his previous encounter with Darvesh and she is horrified to know about his thoughts. She then receives a mysterious prophecy ostensibly of happiness from the same Darvesh.

Farhad gets an insight into the milieu surrounding Kazim Shah’s state. As he gets curious about Mahi, he luckily gets a chance to have her glimpse as he is tested for his driving skills. Mahi and Sahiba are scared to learn about his arrival.

Taimoor’s mother sends a formal request to meet Kazim Shah’s family in order to bring a proposal. Mahi warns Farhad through Fakeeran to leave the mansion immediately to save his life. Farhad wins the confidence of Nazim Shah and is shocked to know about Mahi’s feelings when she finds no other solution but to meet him.

Mahi’s blunt refusal spoils Farhad’s romantic dreams and he is later shattered to learn about her proposal. Taimoor’s family lands in Bahawalpur and both families felicitate imagining the upcoming prospects. Dilawar gets closer to Farhad whose family is surprised to receive his financial help.