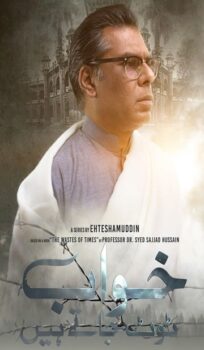 Below is the episode-wise story of the drama ‘Khwaab Toot Jaatay Hain’. First, let’s look at the characters played by the cast:

The drama is based upon the self-written notes of Professor Doctor Syed Sajjad Hussain, the Vice-Chancellor at the University of Dhaka during the separation of Bengal (former East Pakistan) and West Pakistan in 1971. In the beginning, he was chosen to act as the Vice-Chancellor at Dhaka university during those times of crisis to secure peace and discipline. The Bengali students are brainwashed into anti-non-Bengali terrorists who wouldn’t shy away from harming and bullying their fellow students to promote their cause. Sajjad himself is of the opinion that no matter what injustice has been done, it’s never enough for one to replace the books in the hands of students with guns. He considers it a family matter between the Muslims of the same nation which shouldn’t invite their everlasting enemy, India. The story progresses in a past and future manner as we’re shown the struggles of war and the end results at the same time. During his final years, Sajjad is imprisoned for having been unsupportive of the Bengalis’ cause of independence during the previous war.

Sajjad is treated as a traitor at Dhaka Central Jail in the flashes of the future. While in jail, he has to work hard as a laborer and is often taunted by the Bengali policemen. Back to the present, Sajjad is of the opinion that West Pakistan should transfer power to Bengalis after the Awami League has won a clear victory. Only by doing so, they can pacify the upcoming flames of hatred and mistrust. Indians supply weaponry as well as other support to the foolish students who they control like puppets when trying to shatter Pakistan as a whole into pieces. While in a meeting, Sajjad declares how the situation can be controlled by cutting the roots of the problem, which is only a few dozen people. The rest are either stupid followers or people too scared to resist the majority. The army is forbidden to interfere in political matters and continues to observe the situation for now. Meanwhile, the Bengalis start leading the mass-murder revolts against the non-Bengalis where flames of war, rape, and murder become a common occurrence. Finally, the army decides to intervene and purge areas such as Dhaka University from the evil of revolting students, commoners, and others. Even after being given the chance to surrender, the Bengalis remain stubborn and so, blood dyes the streets red in that single night where thousands of people get killed under the hands of the military.

A neighborhood woman insults Sajjad’s daughters at school for being the offspring of a traitor. Later, that woman apologizes to their mother for her rude behavior. The enemy has infiltrated media companies throughout the country and blocked any sensitive news regarding India and Bengali public’s wrongdoings. A subordinate at the university wants Sajjad’s signatures on a list that the list involves names of the troublesome students who disrupt peace within the university. Sajjad is infuriated and refuses to leak university intel to others. In the future, Sajjad is visited by his family members in jail. Sajjad uses the money given by his wife to buy a register of blank pages for his writings. Back to the present, the remaining female students within the hostel request Sajjad to relocate them to somewhere safe. Major Mumtaz arrives at that moment and suggests him to relocate as well. He’s of the opinion that a war between Bengal and Pakistan is imminent, with India supporting the Bengalis. Shortly after his relocation, an aircraft crashes next to his office at the university. Some time later, the Bengalis break into his house. Taken into captivity, Sajjad is horribly tortured and later prepared for a court meeting.

Sajjad gets a death sentence in the court proceeding after his students and subordinates slander him. After being brutalized, he’s abandoned by them on the street while awaiting his death. A stranger takes him to the hospital despite a warning. Upon learning of his survival, the Bengalis come looking for trouble again. They threaten the doctor to let him die but he refuses. Sajjad’s journalist cousin rushes over soon after learning of his friend’s misery. As a chief journalist, he reports the atrocities committed against Sajjad. Previously, Sajjad had greatly looked after a boy named Raza. To return the favor, Raza serves Sajjad wholeheartedly while he’s in the hospital. During his down moments in life, even his closest relatives and friends abandon Sajjad except for a few ones. Instead of getting justice, Sajjad is wronged once again and jailed. There, he spends two years from 1971 to 1973. During his stay, he pens down his life experience while keeping it hidden from the police authorities. He published his notes three years before his death on Jan 12, 1995.