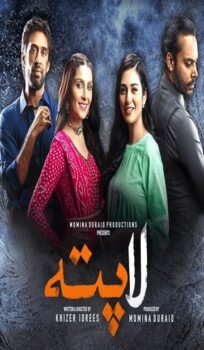 Below is the episode-wise story of the drama ‘Laapata’. First, let’s look at the characters played by the cast:

Falak and Shams are dating secretly. Shams starts gambling to earn quick money. Geeti, a tik toker, plans to run away with her boyfriend. Geeti’s boyfriend bails on her because his sister ran away. She then catches Falak and Shams at the roof promising not to tell in exchange for something.

Shams’ father is worried about his bad company and financial issues. He borrows some money from his elder brother. Falak’s sister, Faryal is worried about her husband Sohail’s job. Falak confronts Shams about his irresponsibility who hides the truth about being a gambler. Geeti’s blackmailing results in Shams sending a proposal which gets rejected by Falak’s family.

Sohail gets a new job. Falak’s badminton coach pushes him for the Championship. Shams’ parents behave disrespectfully with Falak’s parents as they have a heated argument over the rejection of the proposal. Shams flirts with Geeti to make Falak jealous. He loses an inspector’s money in gambling, who demands it back with interest within 48 hours.

Falak tells Shams the reason for rejection being his father borrowing money from her father. Shams intervenes between both families’ fight saying he’ll marry Falak under any condition. Their marriage being fixed devastates Geeti. Falak has topped in her exams. Shams’ phone is off even after the interview.

Shams goes missing. Accusing herself, Geeti repents her sins. An inspector kidnaps Shams after his interview. Shams’s parents file an FIR to the same inspector who plans to label him as a terrorist. Geeti finds out her peer being a fraud and stops blaming herself. Hakeem poisons the inspector and runs away.

Shams is presented as a terrorist. He pleads for his innocence but in vain. Shams has been lost for 2 years now, Geeti is shown doing a TV interview and Falak wins the Badminton Championship. Geeti and Nasreen’s groom-to-be, Farhan start crushing over each other. Falak’s boss, Daniyal likes her but she rejects his proposal.

Faryal suspects Sohail of having an affair. He tells her about Fatima’s proposal and his rejection. Shams, still in jail, is visited by a senior officer, who initiates an inquiry commission for him. Sohail, after returning Fatima’s money and ending the relationship with her, gets into an accident.

Shams’ cellmate gives him hope to contact his family. Geeti persuades Nasreen to forget about Farhan’s proposal. Danyal visits Falak’s house, where he meets Faryal as well. She tells her parents about Danyal. Her parents convince Falak to go to dinner with him where he proposes to her.

The one who would help Shams contact his family turns out to be his nemesis later harasses Falak, who is saved by Daniyal. She decides to marry Daniyal. Farhan runs away with Geeti’s jewelry. Nasreen finds out about their relationship and gets angry with Geeti but then reconciles. That nemesis gets killed and Shams is released.

Daniyal and Falak get married the same night Shams returns home. Shams tells everyone the truth about his gambling, the inspector, and jail. He calls Falak to inform of his arrival but she bursts out at him. Geeti goes to Farhan’s hideout with Nasreen and recovers all her jewelry.

Nasreen gets married to one of Geeti’s ex. Geeti asks her mother to fix her marriage with Shams. Sham’s father, Hameed, getting sick prompts Shams to get a job. Daniyal is mentally sick and suffers severe anger issues. Falak finds out that Danyal had married earlier, rumor has it he killed his wife out of suspicion.

Falak leaves a party, not believing the allegations against Daniyal. Shams gets a new job where Raju, an employee, creates problems. Geeti’s mother takes her proposal for Shams whose parents assent. Daniyal reads Falak’s diary, slaps her to find her former love for Shams but gets a slap in return from Falak. He threatens to kill Shams.

Raju creates problems for Shams and gets fired. Shams agrees to marry Geeti. Falak’s maid tells her the truth about Daniyal’s first marriage. Daniyal loses his temper and is about to hit Falak when her maid, Munira, attacks him from behind. Falak escapes with Munira by going to her house.

It is revealed that Daniyal’s first marriage was for revenge, with the daughter of a Choudhry who had captured his ancestor’s land. Daniyal killed his wife because he thought she was cheating on him but it was all a misunderstanding. Shams and Geeti get engaged. Daniyal gains consciousness after some time and decides to kill Falak.

Raju apologizes to Shams and invites him to dinner. At lunch, he threatens Shams to resign but Shams has a plan. Daniyal finds Falak and to protect herself, she hits him several times with a jug. Falak runs to leave for Karachi and Munira also runs away leaving Daniyal wounded.

Shams buys a new bike and takes Geeti for a ride. The husband of Sohail’s sister had parted ways with her which is why she came to Pakistan but now she decides to go back. Falak reaches her parent’s house at midnight. Police starts investigation in Daniyal’s house. Falak doesn’t disclose the truth about Daniyal to anyone.

Falak’s father suspects that Falak is hiding something. Geeti catches Shams and Falak alone. Shams wants Falak to leave Daniyal and come back to him, she denies. Geeti warns Falak to stay away from Shams. Falak visits a lawyer to seek advice but comes back in terror. She is having nightmares regarding Daniyal.

Shams tries to make Falak jealous by taking Geeti out. Police come to Falak’s house, interrogating Falak about Daniyal. She still doesn’t unfold the truth to the family. She plans to run from the house, leaving a letter for her father but turns back at the last moment.

Falak gets a call from Ayesha who promises to help her. At Shams and Geeti’s mehndi, the police come to arrest Falak as Geeti secretly informs them about her whereabouts. Ayesha prepares to fight for Falak’s case. Daniyal’s father bribes the maid’s husband to not let him come in front of the police.

Geeti confronts Shams about his rude behavior since the arrival of Falak but in vain. Shams goes to Islamabad for Falak’s hearing. He runs into his old friend, Logic in Islamabad. Ayesha asks Shams to find Munira. Geeti has the contact of Daniyal’s family’s lawyer and plans to use him to win Shams back.

Shams finds Munira but couldn’t bring her to the court. He returns and tells the situation to Falak’s father. Geeti rejects a supporting role in a drama. She tips the prosecution lawyer about Falak and Shams affair, at which Shams ends their relationship. Shams offers to take the murder blame on himself but Falak refuses.

The prosecution plans to convince Munira testify against Falak, instead she saves Falak. Geeti warns Falak to stay away from Shams. Falak and Logic investigate all about Geeti’s past affairs to end her relationship with Shams. Logic reveals everything to Geeti’s mother. Shams and Falak get engaged while Geeti pursues her acting career.