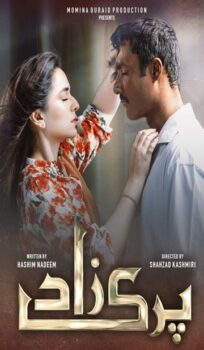 Below is the episode-wise story of the drama ‘Parizaad’. First, let’s look at the characters played by the cast:

Manzoor does not celebrate the birth of his third son, Parizaad, as it will exacerbate his poverty. Twenty years pass and Parizaad becomes a hardworking student who supports his brothers by teaching tuitions. With a sensitive and literary heart, he writes poetry and appreciates aesthetics. He is tasked to teach a neighborhood girl, Naheed. Coincidentally, Shauky, a loafer in the neighborhood who has a crush on Naheed, asks Parizaad to write a love letter for her. While climbing her roof at night, Shauky runs away after Naheed screams with fear, dropping the letter on the roof. The letter is later discovered by Naheed’s father who, seeing the handwriting, assumes Parizaad to be the real culprit.

Mirza confronts Parizaad about the letter and slaps him without hearing anything. Parizaad discloses the truth to his sister. Shauky apologizes to Parizaad, claiming Naheed knew it was Shauky, also she was not alone. Parizaad follows Naheed and finds her on a date with Majid, a pious young man from the neighborhood, which unfolds her lies and Shauky’s truth.

Parizaad tries to commit suicide, but a new friend, Ahmed stops him. Majid sends a marriage proposal for Naheed. Parizaad’s family receives a proposal for his sister, Saeeda, from an aged guy, Salim. Both girls get married on the same date. Saeeda becomes happy as Salim wants her to continue her studies.

Majid and Naheed shift to Karachi for two years. Ahmed advises Parizaad to impress people with his words. At Ahmed’s rented house, Parizaad meets Bubbly, the daughter of the house owner and a tomboy. Saeeda’s sisters-in-law somehow turn their mother against her education. Salim gets arrested for a fake cosmetic products case.

The family that brings the proposal for Bubbly, demands a dowry worth 12 lacs which infuriates her. She kicks them out of the house. Parizaad gets Salim bailed through his student’s father, a senior officer. Bubbly’s father slaps her. Parizaad teases Bubbly at knowing her real name, Saima. Ahmed advises Parizaad to marry Bubbly.

Saeeda’s elder brothers refuse to lend her money. Ahmed asks Bubbly’s parents about Parizaad being their live-in son-in-law. Bubbly shows no objections but runs away to Karachi, the very next day. Bubbly’s parents leave the city. Ahmed also moves back to his home-town. Parizaad gets admission in a university on scholarship.

Lubna, a theatre student, approaches Parizaad for writing a poem in her play. Impressed by Parizaad’s poetry, she befriends him. Salim’s business is shut for six months. Saeeda’s brothers provide no help which puts her marriage in danger. Mr. Noman from Lubna’s party asks Parizaad to sell his poems to him.

Parizaad visits Lubna’s place where he is questioned by her mother. It is revealed that Lubna does not belong to a respectable family and has been sold by her mother to a business tycoon, Noman, the same man who had offered Parizaad to sell his words. Realizing the power of money, Parizaad quits university and starts welding. Saeeda is pregnant and is mistreated by her husband. Parizaad sells his poetry to Noman for 5 lakhs to rescue Saeeda.

Parizaad moves to Karachi with the help of his boss to earn more money. His boss’s former employee, Jaanu, receives him at the station. Parizaad meets Jaanu’s new boss, Behroze, and is hired immediately. Parizaad catches some goods being transported secretly and is asked by his manager to keep his mouth shut.

Parizaad informs Behroze about that night’s incident and impressed by his bravery, Behroze appoints Parizaad as a bodyguard and spy for his young wife, Laila. Parizaad’s family gets to know about the money he gave to Saeeda, and is determined to find the source of the huge amount.

Parizaad learns that Laila was handed over to Mr. Behroze due to her family conditions. Parizaad helps Jaanu get engaged. Laila confronts Parizaad about him reporting her routine to Behroze. She asks him to help her meet her aunt, and not to tell Behroze. Saeeda tells her sister-in-law about money Parizaad gave her.

Parizaad is torn between helping Laila and being loyal to Mr. Behroze. Behroze catches Laila with her boyfriend. Laila accuses Parizaad of misleading her. A bodyguard hits Parizaad. Behroze kills Laila and her boyfriend. He keeps Parizaad in a safe place until healed. DSP Badar starts investigating the missing case of the ambassador’s son, Laila’s boyfriend.

As the police investigation proceeds, Mr. Behroze sends Parizaad to his old servant, Guru. There, he meets Bubbly, now known as Dilawar. She tells Parizaad how Guru saved her from some goons and made her his son named Dilawar. Guru himself is an incomplete man and runs a place for such people.

Parizaad makes Guru understand the agony of Bubbly’s parents. Police reach Behroze’s office to investigate but Feroze handles them well. Guru asks Parizaad to find the whereabouts of Bubbly’s parents. Badar, being a lady inspector, gets humiliated for the delay in solving the case and visiting Behroze’s house without a search warrant.

Parizaad convinces Bubbly’s parents to meet her and they come to visit her at Guru’s place. Police capture Laila’s friend. Upon Guru’s advice, Bubbly returns back with her parents. Police get a search warrant for Behroze’s house and take Parizaad with them as he rushes to help Behroze.

Parizaad takes the blame for all the murders in front of his lawyer and the police, buying time for Behroze after Jaanu comes to meet him in prison. The police find Laila’s letter blaming Behroze if anything happens to her. They come to arrest Behroze who kills himself. Parizaad’s release becomes imminent as he committed no major crime.

Six months have passed and Parizaad’s brothers have disowned him. Feroze gets hanged while Mr. Behroze left a fortune for Parizaad. Five years later, Parizaad is released from jail. According to Behroze’s will, Parizaad takes over the company. He offers Jaanu to work with him but he refuses. Parizaad gifts him an apartment and leaves.

Parizaad meets his old friend, Lubna, in a party who has become a heroine known as Mahpara. She informs him about her divorce and career. Parizaad accidentally finds RJ Annie reciting his poetry on the radio which convinces him to visit his family. His sister bursts into tears after seeing him.

Parizaad visits her sister who has a daughter named Parisa. Salim returns the money Parizaad once lent him but he gives it to Parisa. Parizaad visits everyone in his neighborhood and offers to help Majid with his job. He tries to find his master Kallu but fails. Mahpara mentions a mechanic named Kallu.

Parizaad goes to meet his Kallu Ustad and gets his garage up-to-date. Majid comes to meet Parizaad and asks him to give a job to Naheed’s sister, Kanwal. Shehzad threatens Parizaad to join the illegal drugs business but he refuses. Majid gets irritated and jealous of Parizad’s wealth while Naheed asks Parizaad to meet her secretly.