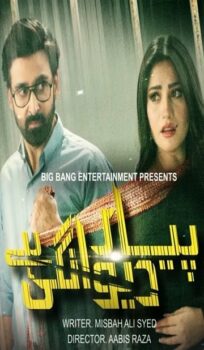 Below is the episode-wise story of the drama ‘Pyar Deewangi Hai’. First, let’s look at the characters played by the cast:

The episode begins with Rabi, a very high-spirited girl madly in love with her cousin Mateen. Mateen is the only child in his family and his mother, Naseem who is Rabi’s phupo hates her and her mother, Saima to the core. Previously, Mateen and Rabi were engaged but after the death of Rabi’s father, Naseem wants to call off their engagement as she envies Rabi for her beauty and fair complexion. Dawood is a mature and decent high school professor. He also is in love with his cousin, Rabi who happens to be his aunt’s daughter. He fumes seeing Mateen dropping Rabi at her university on his motorcycle. Sara, Rabi’s elder sister is separated from her husband due to which she lives at her mother’s house. She tries to knock some sense into Rabi to keep her love for Mateen in control as his mother does not have clean intentions for Rabi. The very next day, Naseem discovers the love letters from Rabi in Mateen’s room, and in her fury, she goes to Rabi’s house to call off the engagement.

The news about Rabi’s love letters and her engagement being called off circulates in the entire neighborhood. Iqbal, Rabi’s elder brother and the only breadwinner of the house is furious after hearing it. Rabi is devastated after the havoc and mourns the loss of her love and dignity. Dawood’s mother, Sajida asks her sister, Saima for Rabi’s hand in marriage to Dawood and Saima instantly agrees. Mateen finds out about his mother’s evil doings and assures Rabi to marry her as he is not ready to give up on his eight years-long relationship. Later, he calls Rabi to a park to meet her. Seeing Rabi’s grief, he tries to cheer her up. Just then, Rabi finds out that her wedding has been fixed with Dawood and so she rushes to her house to express her refusal. Seeing Mateen with Rabi, Iqbal loses his cool and the two get into a heated argument during which Rabi is injured.

Sara tries to convince Rabi to forget Mateen and think about her family’s respect but Rabi shuts her eyes to it as she is head over heels for Mateen. Iqbal forces his mother to conduct Rabi’s marriage ceremony with Dawood as soon as possible. Upon knowing that Naseem is planning to hitch Mateen with a girl of her choice, Mateen threatens her to kill himself and ultimately consumes petrol attempting to suicide. However, he is saved after he is taken to the hospital on time. Aslam berates his wife, Naseem for going against their son’s wishes and finally convinces her to make Rabi their daughter-in-law. Seeing Rabi’s craziness for Mateen and her determination to marry him at all costs, Sara asks Dawood to take back his proposal. Despite his true love for Rabi, Dawood decides to respect Rabi’s feelings for Mateen and refuses to marry her.