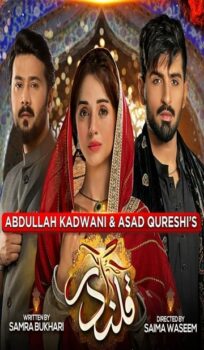 Below is the episode-wise story of the drama ‘Qalandar’. First, let’s look at the characters played by the cast:

A humble, decent, and religious girl, Dur-e-Adan lives in a village where she is hailed as a spiritual being because her prayers are always answered. Orphaned, she lives with her loving paternal uncle Ayub and his cruel wife Rahat. Despite treating Adan like a maid, Rahat keeps torturing and taunting her. One season, the villagers suffer from barren land due to a lack of rain. Ayub requests Adan to pray to God to bless the village with rain. She prays with all her heart and moments later, it starts pouring. Irfan is an obedient son, who works as a teacher in a small school in the village. He has three younger siblings; Tabraiz, a young, modern boy who studies at a high-class university in the city, Juhi, a beloved but lazy daughter, and youngest Nomi.

Although Irfan supports his family in all sorts of ways, his mother, Safiya keeps praising her younger son Tabraiz for his brilliance. Shafaq, Irfan’s maternal cousin likes him and despises Juhi for her sloppiness. Shafaq’s mother, Qudsia keeps persuading her to make a good image in front of Safiya in hopes that Safiya hitches her with Tabraiz. Safiya and her husband Yaqoob miss Tabriaz immensely and eagerly wait for his studies to get over soon so he gets a decent job. In the city, Tabraiz befriends a girl, Sumbal at his university. Sumbal is a spoiled brat with anger issues who shows off her father’s wealth while abhorring the poor and deprived. When Tabraiz decides to visit his family, Yaqoob plans a trip to his elder brother Ayub’s house. Ayub’s elder son, Tanveer lives with his wife Aneela separately. Despite his love marriage, he keeps a lecherous eye on Adan, making her feel uncomfortable.

Yaqoob is impressed with Adan’s morals and her swift working capabilities. Rahat orders Adan to prepare a feast for the guests. Although Adan eats the leftovers, Rahat taunts her, calling her greedy. Tabraiz pities poor Adan for the mistreatment she endures. In Safiya’s absence, Qudsia visits her house and is disappointed to know that Tabraiz left for the village without meeting her. Shafaq fumes with anger upon seeing Irfan cooking a meal for his siblings. She berates Juhi, advising her to pay attention to house chores for her own betterment. Tabraiz gets bitten by a snake in the village. Due to heavy rain, he is unable to reach the hospital. Adan uses her spiritual power, asking God to send help. A miracle happens and out of nowhere, a doctor shows up at the house and treats Tabraiz with an antidote. In the city, Sumbal publicly humiliates her driver for not arriving on time. Later, she demands her father send her on a shopping trip to Dubai.

Tabraiz grows close to Adan and starts spending more time with her. When he sees her wearing torn clothes, he brings her a shawl to protect her from the cold. Upon knowing that Tabraiz is Yaqoob’s only hope for a brighter future, Ayub suggests that Yaqoob marry Tabraiz to a respectable and pious girl who does not snatch him away from his family. Qudsia swells with joy after knowing that Safiya is returning home with Tabraiz. She orders Shafaq to clean Tabraiz’s room and flutter around him to make herself noticeable in his eyes. Tabraiz bids farewell to Adan and requests her to pray for him so he becomes a wealthy man. Before leaving, Yaqoob informs Ayub that he is interested in marrying Adan to Tabraiz. Rahat brutally questions Adan about her new shawl.