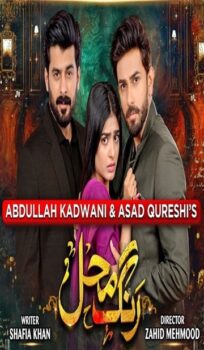 Below is the episode-wise story of the drama ‘Rang Mahal’. First, let’s look at the characters played by the cast:

Rayed belongs to a rich family who consider their secretary’s daughter, Mahpara, as their own due to a past incident. Maha is in love with Rayed who on the outside seems to get irritated with her but actually cares for her. The elder son, Sohail is set to marry Hajra. He seems like a decent man but actually has a different personality. Hajra is not happy at the attention Mahpara receives from the family and considers her a servant. Rayed supports Maha during the wedding to keep her protected from Hajra. Sohail clears to Hajra about Maha’s importance in their family adding to her hate for Maha.

Hajra plays her tricks to plant a seed of doubt in her mother-in-law’s mind about Mahpara gaining more importance and her being inferior to her. Sohail keeps spending time with his ex-girlfriend while lying to his family about being away for a sick friend. Rayed’s friendlier behavior with Mahpara gives her the wrong clues about them being romantically involved. Rayed’s mother warns him about his behavior towards Hajra. He clears to her about protecting Mahpara and warns his mother about Hajra’s intentions. Hajra is upset to see Rayed flirting with her cousin, Maheen. The family is shocked when Maheen asks about Maha’s fiance.

Rayed clears the misunderstanding and Sohail grows curious about his relationship with Maha. Rayed makes it clear to Maha about being sympathetic towards her. Maha is hurt and draws distance with the family. Hajra is pregnant but hides this fact and instead makes Sohail believe about Maha expecting Rayed’s baby instead. Sohail grows fond of Maha and buys a necklace for her. He turns the situation in Maha’s favor by presenting the same necklace when Hajra accuses her of stealing. Maha is elated as Rayed expresses his feelings for her but actually intends to protect her.

Shehla is shocked to see Rayed gifting expensive items to Maha and expressing his feelings. She sends Rayed back abroad but his flight is delayed. Shehla gives an earful to Maha for deceiving her after being instigated by Hajra. Maha is hurt and decides to return gifts back to Rayed. It is when Sohail tries to misbehave with her but puts all blame on Maha. Rayed enters and slaps Maha for blaming Sohail. She is insulted terribly and her family leaves the place for good. Before leaving, Hajra strains her mind against Rayed and Maha curses her to never find happiness for playing games with her life.

Mahpara and her family spend the night at a station where she has a last emotional conversation with her father and finds him dead in the morning. Shattered and enraged, she curses Shehla and Sohail and leaves to stay at the house of Fazal’s friend. The woman at the new place keeps taunting her, making her feel dependent on others while her son, Salar secretly supports her. Sohail tries to search for her but in vain. Rayed suffers from brain hemorrhage and grows seeds of hate against Maha. Maha decides to take up a job and live an independent life.

Maha applies to an international firm where the boss insults and rejects her. The man later becomes Rayed’s partner in business. Maha is hurt at not finding a job as she wants to teach a lesson to the people who did wrong to her. She starts working as a teacher. Shehla is furious at Hajra as she blames Sohail for being characterless. Hajra also fakes the news of Maha dying with her grandmother in an accident. Salar threatens to kill himself to convince his mother to marry Maha. He gets engaged to her and plans to leave for Islamabad for a job.

Salar’s mother, Shakeela finds the whole truth about Maha and tactfully makes her accept the truth about being thrown out of the previous house causing her father’s death and Salar hears it on call. She throws her out in the middle of the night where she is saved from a guy by Shahmeer, the man she went to interview for, now a partner of Rayed. Maha takes refuge in the house of the school’s principal who treats her grandmother like a servant. Hajra loses her baby. Salar comes back, inquires about Maha’s past from her friend, berates his mother, and searches for her. Shahmeer too tries to find Maha.

Sara, the daughter of the school head, Durdana berates her mother for mistreating Maha and her grandmother. Rayed spots Maha at the pharmacy and everyone thinks he’s going crazy. His family goes to dinner at Sara’s place. She is upset to see him there as their previous meeting was quite unpleasant. Hajra is taken aback to see Maha at their house. Upon hearing her conversation with Sohail against Sara, Rayed decides to marry her. Maha searches for a new place and gets an earful from Durdana. Hajra keeps threatening Sohail about exposing his lies if he ever hurt her.

Maha leaves for Islamabad and meets Salar who helps her take CA exams. Hajra meets Sara and states Rayed’s history with Maha and the mental torture he went through after her betrayal. Sara still accepts him and narrates her feelings to Rayed. He, on the other hand, keeps missing Mahpara. Sara’s mother talks rudely to the sick grandmother of Maha and makes her perform household chores. Sohail is completely under Hajra’s control and tolerates her misbehavior. Maha tops the CA exam and is grateful to Salar who decides to wait to propose to her till she settles with her grandmother.

Sara decides to stand by Rayed. Maha is granted a high post in a company. She shifts to a new place with her grandmother. Salar turns out to be working in the same company as Maha. Hajra, expecting again, takes advantage of her condition to control Sohail. Maha’s decline to work with Rayed’s company results in them being blacklisted. Shehla finds Maha’s bracelet at Sara’s house and misses her terribly. Rayed is shocked to find Maha alive and storms out angrily reminiscing about the news of her death. He shouts at his family for considering him crazy.

Rayed stays upset about Mahpara and remembers his happy memories and betrayal. Sohail finds the truth about Maha and goes to meet her. He states how he still desires for her but she gives him befitting replies. Salar’s parents find out the truth about Fazal’s family and regret their treatment with Maha. Maha’s grandmother wants her to get married but she strictly refuses. Durdana scolds Rayed for his company’s failures and asks Sara to give a second thought to the proposal. Maha calls Hajra to inform about Sohail’s action whose disturbed mind starts affecting her pregnancy.

Rayed offers money to Maha in exchange for the contract but she kicks him out. Salar requests Maha to share her worries but she decides to handle things on her own. Fazal and Maha get into a heated argument over her actions. She slaps Sohail as he tries to get close to her and he plans revenge. Through his worker, Sohail accuses Maha of bribery and she is arrested by the police. Salar rushes back to the city for Maha’s help. Hajra warns Sohail of his heinous acts. He meets Maha’s grandmother and states to get Maha by hook or crook.

Rayed stays upset imagining Maha’s closeness with Salar. Hajra delivers a baby girl, Fari. Sohail beats up the inspector who released Maha. Maha’s boss inquires about the whole case and with Salar’s help proves Maha innocent. Sohail grows possessive of his daughter and doesn’t let anyone touch her. He terribly pushes Sara as she tries to hold the baby. Hajra too fears Maha’s curse and asks Sohail to mend his ways. Rayed talks rudely to Sara, seeing her dressed as Maha. He apologizes to her and mends things between her and Rayed. Maha can’t get her mind off of Salar and his soothing words.

Sohail is upset to find out about a guy in Maha’s life as Rayed spots her with Salar celebrating her birthday. As Maha hears about a ceremony for Sohail’s daughter, she goes to their house, curses them and gets slapped by Shehla. Maha pretends to give in to Sohail’s conditions to collect evidence against him. Maha’s boss, Saqlain, declares her innocent. Rayed begs Maha to stop the war as he feels hurt seeing her in pain. She stays stern and insults him. The woman Sohail ditched is seen spying on him and steals Sohail’s daughter, Fari from the hospital. Rayed goes crazy searching for Fari.

Sohail gets worried at the disappearance of Fari. Hajra blames Mahpara but Sohail doesn’t believe her. Rayed goes to Maha and warns her to return Fari. Sohail overhears Hajra’s conversation with her mother and finds traps Hajra had set for Maha. He goes to apologize to Maha and asks her to return his daughter. Rayed questions Sohail about Maha’s threats. He blames Maha for her loose character and receives a tight slap in return. Sohail finds out Husna being the kidnapper who wants to put his daughter into a prostitute business like her. Maha overhears Sohail asking his men to kill Husna.

Maha wishes to save Husna and convinces her to return the child. She informs the same to Hajra who promises to save Husna but provides her details to Sohail. As Husna hands over the child to Rayed and Maha, she is shot down by Sohail. Husna’s sister curses him and testifies against Husna due to Sohail’s threat. Learning about Maha’s innocence, Sohail falls in love with her. Maha refuses to be a second woman and asks him to marry her. Smitten by Maha, Sohail divorces Hajra. Maha, on the other hand, has no plans to marry him.

Rayed tries to make Sohail aware of Maha’s intentions. Sohail shows a new house to Maha but she wishes to go back to the similar house. Sohail, as per Maha’s wish, takes signatures and puts his house into Maha’s name. Hajra faces the same embarrassment from society as Maha had suffered. Salar talks rudely to Maha upon learning about her affair. He hits Rayed when he bad mouths about Maha. Rayed shows proof of Maha’s innocence and how Fazal builders framed her. Rayed still stands by his brother.

Maha starts wedding preparations with Salar. Rayed learns Sohail’s truth through Hajra and the police officer. He shouts at his parents and begs for Maha’s forgiveness upon Sara’s insistence but in vain. Hajra finds Rayed helping her despite knowing the reality. She proves Rayed’s innocence to Maha. Salar realizes Maha’s and Rayed’s true love and steps back. Sohail is thrown out of the house by Fazal but shot to death by Husna’s sister. Maha and Rayed get married and have a happy ending. Salar and Sara seem to start a new journey together.