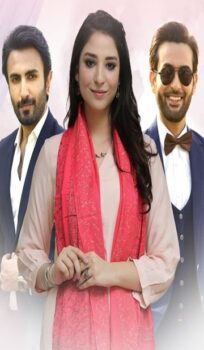 Below is the episode-wise story of the drama ‘Shehnai’. First, let’s look at the characters played by the cast:

The story of the drama revolves around Meerab and Bakht. Meerab; an eligible bachelor from London, is coming to look over at Bakht with his family. Bakht walks out on Hunain; her boyfriend, after giving him an ultimatum. Tooba; Bakht’s aunt, arrives with her family to attend the first meeting with Bakht’s in-laws. Samreen, Meerab’s girlfriend calls and threatens of killing herself.

Meerab goes and meets Samreen while his family covers for him. Tooba asks for Bakht’s hand in marriage for Ahsan that causes a fight between Tooba and Ambreen (Bakht’s mother). Meerab finally arrives and gets engaged with Bakht. They both then meet secretly on the roof and plan to end their engagement.

Bakht’s parents plan her wedding gifts. Meanwhile Azhar and his wife fight over the division of property. Kaffi tries to break off the marriage by bad-mouthing Bakht to Meerab but the wedding date gets set. Hunain, Bakht, and Meerab meet where Hunain secretly confesses to Meerab that he doesn’t want to marry Bakht.

Bakht’s engagement gets fixed when rumor spreads that she’s planning to run away. Her mother confronts her but she doesn’t say much. Bakht then informs Meerab about running away with Hunain who stops her and volunteers to take her to Hunain’s place for confirmation, first. Meanwhile, Kaffi and Maliha try to influence Azhar against his elder brother.

Bakht run’s away and her family finds out. They create a cover-up story for her in-laws and the guests. Azhar suggests separation and all siblings jump in his support. Meanwhile, Bakht and Meerab see Hunain getting married. Bakht returns and all the cousins cover for her whereabouts with the elders. Kaffi gets slapped by Azhar for creating confusion.

Azhar seeks forgiveness from his elder brother and Kaffi who cancel out the plans for separation of the family. Later on, Saima & Ahsan and Beenish & Rafay grow a fondness for each other. Meerab gets worried that Bakht backed out of the marriage so he tries to talk to her. Meanwhile, Kaffi tries to confront Meerab and Bakht for their initial plan to run away.

Kaffi escorts Samreen to Meerab’s house and she introduces herself as Meerab’s colleague. She confronts Bakht about her intentions with Meerab during her ongoing function. Bakht senses something going on with Saima and Beenish. Later, she catches Saima and Ahsan on the terrace.

Tooba catches Beenish with Rafay during a blackout and scolds her. Bakht tells her father about everything when he gets a heart attack and is rushed to the hospital. Meerab goes to the hospital and consoles Bakht. Later on, Bakht finds out that her father didn’t hear anything and she wasn’t the trigger. Meanwhile, Samreen continues to threaten and accuse Meerab for his interest in Bakht.

Iffi takes a picture of Meerab and Bakht hugging, and accidentally sends it to Kaffi who wants to show it to Samreen. Saima sends the picture to Samreen to clear Bakht’s path for Meerab and this causes a fight between Bakht and Meerab. Later on, Bakht spots Samreen with her fiancé and understands that Samreen is playing Meerab.

Bakht spots Samreen with her fiance in the mall and informs Meerab who doesn’t believe her. Saima & Ahsan, and Rafay & Beenish decide to marry but their parents become an issue. Samreen threatens Meerab who almost raises his hand at her. She leaves the house angrily and blackmails Meerab into revealing the truth to everyone.

Blackmailed by Samreen, Meerab is about to reveal their secret when Samreen’s fiancé walks in and Samreen lies to him in front of Meerab. Later on, Bakht tries to convince Meerab that Samreen is betraying him by showing Samreen and her fiancé, shopping together. Meanwhile, Ahsan requests his mother to ask for Saima’s hand in marriage who disagrees, and Munni supports the girls to marry their boyfriends.

Kafi catches Beenish and Rafay, and tells Zubair to make Rafay back off. Samreen emotionally blackmails Meerab when he confronts her about meeting her fiance, Saleh. Meanwhile, Tooba insults Saika which causes her to leave the house with Saima, unannounced. As a result, Tooba and Ambreen get into a fight. Iffat’s mother finds out about her affair.

Samreen tells Absar and Azhar everything about her relationship with Meerab and Bakht running away. Bakht’s parents question her and she lies as Meerab’s sister had advised her. Later on, Absar calls over Zubair, and both families talk about the ongoing rumors. Kafi, Maleeha, and Tooba plan to use Bakht’s broken marriage as a way of getting their share in Absar’s joint wealth.

Meerab’s sister tries to refrain Meerab from telling the truth but he doesn’t listen. He goes to Absar, confesses his love for Samreen, and calls off the wedding. Kafi goes to Azhar and Absar to taunt and ends up getting his shirt torn by Azhar. Everybody uses Bakht’s broken marriage as an excuse to get their shares in the riches while Absar faints.

Absar falling ill causes Munni and Tooba to apologize for being greedy. Realization dawns on Azhar and he tells off Maleeha for trying to break off their family. Kafi searches Bakht’s room. Meanwhile, Samreen tells Meerab the truth about choosing Saleh and leaves him. Zubair gives Meerab an ultimatum to marry Bakht. He then apologizes to Absar and Bakht’s family advises her to marry Meerab for the family’s sake.

Bakht sees Saima with Ahsan and takes Saima to a coffee house to talk it out. At the coffee place, Bakht sees Hunanin working as a waiter. Hunain tells Bakht that he was marrying another girl to support his family; to pay for his father’s blood cancer treatment, to retain his house, and land a job with the girl’s father. He also says that he told Meerab everything but his marriage broke when Bakht came in storming. Meanwhile, Ambreen first seeks an apology from Tooba then goes to Saika, to bring her back home.

Bakht argues with Meerab for lying to her about Hunain. She gives a cheque of Rs. five lac to Hunain for his father’s cancer treatment. Hunain takes the money to Kaffi who planned to split this money in exchange for Hunain’s marriage with Bakht. Meerab finds out and tells Bakht the truth, who doesn’t listen.

Meerab tells Bakht that Hunain is involved with Kafi but she doesn’t believe him. Hunain shows up at Bakht’s house under Kaffi’s orders where Meerab and Azhar spot him on the roof with Bakht. Meerab hides Hunain just in time and Hunain introduces himself as Meerab’s friend at an ongoing dholki function. Meanwhile, Ahsan returns to the wedding house.

Hunain outsmarts Kaffi and tells him that he loves Bakht and has transferred all the money to Kaffi’s account as proof of his betrayal to the family. Later, he tries to gain points by helping out Absar. Meanwhile, Meesub; Iffi’s boyfriend, calls on Munni’s phone and Maleeha sees and insults Munni and confronts Iffi. Also, Meerab tries to convince Bakht about his rightful intentions.

Hunain spends time with Absar to get on his good side. Bakht tells Meerab to leave, and he runs into Hunain’s father at the airport. Meerab reveals Hunain’s truth and brings Hunain’s father to Bakht’s house. However, the man turns out to be an accomplice in his son’s scheme to trap Bakht. Meanwhile, Rafay asks Meerab to talk about his marriage with Beenish, and Bakht’s mother convinces Saika to consider Ahsan for Saima.

Tooba creates a scene when Absar gives 50 lakh rupees to Bakht at her wedding. Hunain sends goons to steal the money from Bakht and Meerab. Absar gets Ahsan a job. Zubair sets Beenish and Rafay’s marriage which pisses Kaffi off. Munni asks Bakht about Hunain’s dead wife. Maleeha catches Iffi talking to her boyfriend, again. Azhar gets suspicious of Hunain and questions Bakht for coming home with him while Meerab covers up.

Munni and Hunain’s father show their liking for each other. Meerab figures out that Hunain stole Bakht’s cash and informs Bakht who doesn’t believe him. Kaffi questions Hunain about the stolen cash and Hunain throws Kaffi out after threatening him. Saika talks Bakht into making the right decision for her life. Meanwhile, Beenish and Saima celebrate their potential wins to get married to Rafay and Ahsan.

Kaffi apologizes to Meraab and requests him to save Bakht from Hunain. Iffi’s boyfriend, Meesum sneaks in to meet her at night while two robbers come to steal. Ahsan and Rafay confuse Meesum as a robber and beat him in the kitchen. Meerab stands at gunpoint to save Bakht. Meanwhile, Hunain’s robbers steal everything and make it look like Hunain saved some items.

Bakht overhears Absar praising Hunain. Rafay and Ahsan advise Meerab to reveal Hunain’s reality. Kaffi tells Absar to fix Beenish’s marriage with Rafay, and Ahsan’s marriage with Saima. Tooba and Saika settle their differences. Tooba overhears Bakht and Hunain’s plans to run away, then confronts Kaffi. Meerab tries to talk Bakht out of marrying Hunain and she gets second thoughts.

Tooba tries to convince Munni about Hunain and her father’s ill plans. Hunain tells Bakht that he’ll make her run away, marry her and then return home the next day to convince her parents. The cousins advise Bakht not to run away. Saima gets engaged to Ahsan, and Beenish gets engaged to Rafay, at Bakht and Meerab’s Mehendi function.

Tooba and Kaffi reveal the truth of Hunain and his father to Bakht. Bakht agrees to marry Meerab when Hunain kidnaps Bakht. Hunain tries to marry Bakht under duress but Meerab shows up with the police in time. Meerab gets questioned, but Bakht tells everyone the truth. Kaffi apologizes to Absar and Meerab sides with Bakht. Absar forgives Bakht, and finally, Bakht and Meerab get married. 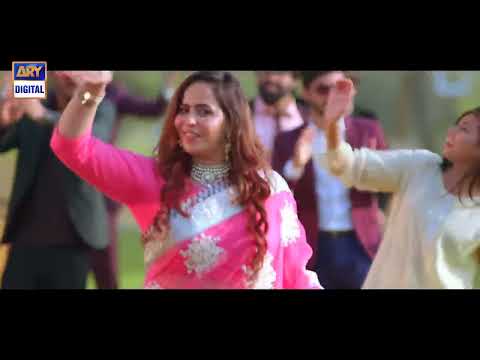