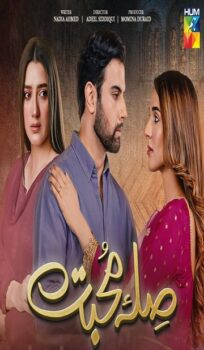 Below is the episode-wise story of the drama ‘Sila-e-Mohabbat’. First, let’s look at the characters played by the cast:

Tabrez and Shahmir and filthy rich sons of a rude man, Mohsin. Tabrez is a kind-hearted man, deeply in love with Alizay who studies in his institute. Shahmir goofs around with many women despite being engaged to his cousin, Rania. He threatens Alizay’s brother, Raheel and father, Rafiq to hand over their workplace to him. Raheel’s wife, Shehreena doesn’t want her brother, Ahmer to marry Alizay. Shahmir casts a bad eye on Alizay and misbehaves with her. He takes out a gun as Raheel tries to save her. Shahmir is shot to death by mistake. Raheel is jailed and the whole evidence is manipulated making Raheel and Alizay the culprits. Mohsin wants Alizay to marry Tabrez so he can snatch her property and take revenge for Shahmir’s death. Tabrez finds the whole truth via Shahmir’s friend and agrees to the marriage to save both Alizay and Raheel. Rania is pregnant with Shahmir’s child.

Raheel is decided to be given a death sentence. Shehreena’s health deteriorates and she loses her baby. She wakes up Alizay’s conscience who convinces her parents for marriage in exchange for Raheel’s release. Raheel is released unknown to Alizay’s marriage with Tabrez. Alizay tries to commit suicide but Tabrez saves her. Tabrez’s mother warns Alizay’s parents to never contact Alizay again and shifts her to servant’s quarter. Mohsin’s family lawyer, Akbar harasses Alizay. Raheel finds ways to help his sister. Rania outbursts at Alizay every time she sees her. Shehreena is irritated as the whole family keeps worrying for Alizay. Ahmer’s mother emotionally asks him to get married and forget Alizay. Tabrez’s mother wants him and Rania married once she completes her Iddah. Rania shouts at Tabrez as he cares for Alizay when she gets hurt. Mohsin finds a way to save Alizay.

Tabrez brings bangles for Alizay and she misses Raheel. Raheel shouts at his lawyer for taking bribes from the enemies. Shehreena wants Raheel to back out from the case and looks for clues against Alizay. Rania starts imagining Shahmir and Alizay talks to Tabrez about her health. Shehreena shows a picture of Alizay and Tabrez together making Raheel believe about their affair before marriage. Tabrez’s mother breaks Alizay’s bangles, injuring her. Tabrez rebukes Akbar for harassing Alizay and she seems to be falling in love with Tabrez. Raheel loses trust in Alizay and ends her case. Akbar keeps manipulating the mind of Tabrez’s father who asks Tabrez to move to Islamabad for three weeks. Shehreena and Tabrez spot Alizay in the hospital and assume her to be pregnant. Shehreena maligns Raheel’s mind against Alizay as she lost her child due to her. Alizay wants to know the reason behind Raheel’s anger.

Akbar suggests divorce between Alizay and Tabrez but gets irked when Sultan doesn’t bother getting Tabrez married to Rania without his consent. Rania gives birth to a boy named Arham and Alizay cares for him. Shehreena cries terribly as she can’t become a mother again. Alizay is introduced forcibly to the guests as Tabrez announces her as his wife. Ahmer is perplexed to find out that his mother supports Shehreena in brainwashing Raheel’s mind against Alizay. Alizay feels jealous and sad to see Tabrez caring for Rania as instigated by Tabrez’s mother. She slaps Akbar as he misbehaves with her again but everyone chides her. Tabrez supports her but she misses her family as Tabrez celebrates Rania’s birthday. Raheel misses Alizay but still can’t forget her betrayal. Rania starts returning back to her happy life and takes a liking towards Tabrez as convinced by her mother-in-law. Shehreena is instigated by her maid of black magic that forces her to misbehave with Raheel’s mother blaming her for snatching her ability to be a mother.

Rania cries in front of Tabrez and begs him not to grow distant from his family. Alizay is sad to see the two close and stays away from Tabrez. Tabrez’s father feigns his sickness to send Tabrez to another city. Tabrez leaves and his parents ask Akbar to take Alizay back to her parents’ house. Shehreena’s health deteriorates when she takes the medicine of a random physician. Her maid, Razia keeps blaming it on Aliya while Shehreena refuses to see a doctor. Saeeda, Shagufta’s helper, tries to inform Tabrez about Alizay but in vain. Akbar keeps Alizay hostage and lies about her running away. Rania realizes Tabrez’s love for Alizay. Alizey runs away from Akbar and lands unconscious at her parent’s house. The family is concerned while Shehreena doesn’t want Raheel to have sympathy for Alizay. Tabrez returns and regrets leaving Alizay alone.

Alizay remains scared and is unable to forget the horrible incident. Raheel’s father makes him realize the trauma faced by Alizay. Raheel apologizes to his sister and both patch up. Shehreena cries thinking nobody cares about her. Alizay’s mother chides Tabrez and warns him about contacting Alizay. The family wishes for Alizay to move on and decide to get her divorced via court. Rania berates Tabrez for taking Alizay’s side as she caused her sadness. Ahmer tries to help Alizay cope with life. She gets upset to see Tabrez and Rania shopping with the baby. Tabrez refuses to marry Rania who is shocked to find out that the family is behind her property. Rania runs away from the house. Some goons harass her but she is saved by Ahmer who is a police officer. Rania takes Alizay’s help and starts living with them. Alizay’s family lends support to Rania. Tabrez files her missing report and meets Ahmer.

Rania recollects her behavior towards Alizay and becomes sad. Ahmer leads Tabrez to Rania and promises to give her all her rights related to the property. Tabrez secretly takes away the property files from Mohsin’s room, enraging him later. He tears the divorce papers sent by Alizay. Shehreena is upset to see Raheel playing with Arham. Rania wonders if Raheel actually killed Shahmir. Akbar wishes to destroy Tabrez and manipulates Mohsin’s mind. He sends his goons to Rania and Alizay who try to kidnap the girls. Amidst the chaos, Alizay’s mother is shot to death. The family shifts the house for Alizay’s sake. Ahmer takes on the case of Aliya’s murder. Tabrez’s parents scold him but he refuses to leave Alizay’s side. Shehreena starts losing her mind and blames Rania and Alizay for Aliya”s death. Shagufta comes to take Rania back but she refuses to leave. Ahmer is warned by his mother to stay away from Rania. Shagufta is enraged as Mohsin plans to bring back Alizay. Ahmer extracts the footage of Shahmir’s death.

Alizay misses the time she has spent with Tabrez. Rania asks her to mend things but she refuses. Tabrez too doesn’t agree to divorce Alizay. Ahmer finds the video proving Raheel’s innocence. Alizay sees Shehreena’s worst condition and informs Ahmer about her. She is upset as Tabrez had seen them together. Ahmer throws out his maid Razia for playing with Shehreena who then goes to Shehreena and attempts theft. As Rania tries to stop her, Razia stabs her. Ahmer comes on time and saves the day. Rania is out of danger and goes back to Tabrez’s house. Ahmer comes to take her statement and inquires about the treatment of family with her. Akbar cleverly transfers Mohsin’s power of attorney to his own name. Mohsin is worried as his properties are on sale. The kidnappers of Alizay are caught but Akbar is nowhere to be found. Rania regrets her misbehavior with Alizay after watching the video.

Rania apologizes to Raheel and his family and accepts Shahmir’s crimes. She puts in good words for Tabrez and asks Alizay to mend her relationship. Raheel and his father leave the decision to Alizay who is confused about the whole situation and reminisces about her moments with Tabrez. Rania and Tabrez confront Mohsin and Shagufta who regret their actions seeing the hate of their children. Akbar is caught by Ahmer and is found to be involved in Alizay’s kidnapping and the murder of her mother. Tabrez meets with an accident. Mohsin is arrested. Shehreena promises to support Ahmer’s decision of marriage and also mends her relationship with her in-laws. Rania makes Alizay realize her love for Tabrez and their proper Rukhsati is planned. Ahmer expresses his wish to marry Rania. She agrees and both couples start their new happy journey.