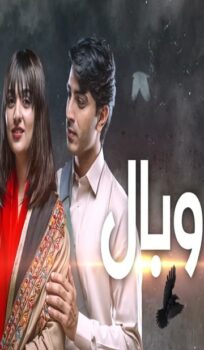 Below is the episode-wise story of the drama ‘Wabaal’. First, let’s look at the characters played by the cast:

The drama begins with a cheery, full-of-life but materialistic girl Anum who studies at an expensive university and has elite-class friends. Although she belongs to a middle-class family, she portrays herself as a rich girl to blend in with her circle. Her father, Shakir works an ordinary job and her mother, Rahat works as a freelance tailor to accumulate funds to pay for their daughters’ education. Maham is Anum’s younger sister who is a compassionate and wise girl, completely opposite to Anum. Shagufta is Shakir’s widowed sister-in-law who runs an illegitimate business on an interest basis, exploiting helpless people. Shakir has severed all his ties with her due to her soiled reputation in the neighborhood. It turns out that she was accused of murdering her friend for which she spent a few days behind bars. Her son, Naveed likes Anum and insists his mother take his proposal for her.

Shagufta arrives at Shakir’s house bearing sweets for her son’s proposal. Shakir straightaway rejects it, bashing her for defaming his family’s name. This affects her severely and she falls sick due to hypertension. Faraz is a talented and capable boy who shifts from village to city to start his professional career. He rents a portion in the same neighborhood where Anum resides. His paths cross with Anum but she harshly brushes him off every time, considering him an average middle-class guy. To buy an expensive gift for her friend’s birthday, Anum creates a spectacle in the house to retrieve money from her father. Shakir feels helpless and holds himself responsible for keeping his daughters deprived. Compelled, he borrows money from his friend so he can fulfill Anum’s wishes. Anum’s friend, Amber from her neighborhood loves a boy and keeps meeting him secretly. Anum feels exasperated by constantly covering up for her.

Faraz starts falling for Anum and confesses his love to her. Rahat loses her cool when she sees the gifts Anum shopped for her friend’s birthday. It turns out that Anum borrowed money from Amber to keep her secret safe when Amber told her that she is eloping with her boyfriend. Shakir meets Faraz in the neighborhood and invites him over for tea. Anum is displeased to see him and tries her best to make him feel unwelcome. While enjoying her friend’s birthday party, she receives a call from Amber’s mother Rihana, asking her about Amber’s whereabouts. Scared, Anum rushes home only to find Rihana creating a spectacle at her house and blaming her for hiding Amber. Anum hesitantly reveals the truth that Amber went to see her lover secretly. This infuriates Rihana and she gets Anum arrested for being equally involved with her daughter. Shagufta finds solace when she hears the news of Anum’s arrest. To tarnish Shakir’s pride, she decides to get Anum released on bail with her “illegitimate money.”