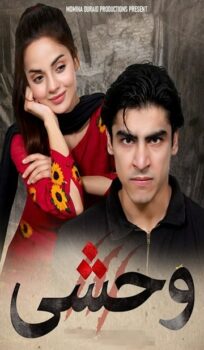 Below is the episode wise story of Hum TV drama ‘Wehshi’. First, let’s look at the characters played by the cast:

The drama focuses on two contrasting families; one in which children are swelled with love and care and the other where they are mentally and physically abused by their fathers. Muneer is an empathetic and affectionate husband to his wife, Muneera, and a friendly and caring father to his only son, Asif. Along with his flourishing family, he excels in his career and gets promoted to a higher rank in office. One day, while returning home from work, he encounters a duo of snatchers who shoot him lethally when he resists giving his belongings to them. Najib is an ill-mannered man desperate to have a son. He considers his two daughters ill-fated and forces his wife, Salma to conceive another baby despite knowing her health complications. Drowned in financial loans, he faces a cardiac arrest and passes away leaving his mother and family alone.

Muneera falls into despair after hearing the news of her husband’s demise. She and her son find themselves unable to imagine their happiness perishing away. Her brother takes her into his shelter to look after his mourning sister. However, his wife, Sardar turns out to be a nasty and cunning woman who treats Muneera like a maid and beats Asif for lame reasons. Najib’s mother and wife mourn over his death and feel alone in a house where they have no other man to look after them. His youngest daughter Sobia feels happy at his death and calls it good riddance. This infuriates Salma and she beats her to a pulp. Sobia who is now used to the beating does not feel bad and keeps up the stubborn behavior. Helpless, Najib’s mother calls her elder widowed son Majid who lives abroad, and asks him to return back to Pakistan.

Majid’s sister, Rasheeda requests him to come back to Pakistan and spend time with his loved ones. When Majid arrives home, his mother insists he gets settled by remarrying. Majid who already has a son Amir, rejects the idea and requests his mother to come with him abroad. Sobia is elated to see the expensive gifts Majid bought her and flaunts them in front of her friends. Sardar pretends to be a courteous sister-in-law to Muneera in front of Saleem. Asif turns into a rebellious kid due to Sardar’s constant injustice and beatings. He finds a boy selling a flute on the street which reminds him of his father. Desperate, he asks Muneera to buy him the flute. Muneera who is already helpless and drowned in sorrow brushes him off. Seeing no other option, Asif steals a hundred rupee note from Sardar’s wallet. When Muneera finds out about it, she brutally hits him for defaming her upbringing.

Sardar creates a spectacle in front of Saleem, calling Asif a thief and demanding to oust him and Muneera from the house. Saleem shuts her up and agrees to admit Asif to a school at Muneera’s request. Following her husband’s suggestion, Rasheeda asks her mother to marry Majid with Salma to flourish both families. Both Majid and Salma refuse to marry as they consider each other bound in a respectable relationship. Rasheeda turns out to be Sardar’s best friend who witnesses Muneera’s miserable condition. When Majid refuses to marry Salma, Rasheeda decides to marry him to Muneera. She convinces Sardar of the proposal by telling her that Majid is a rich man with millions of bank balance. Muneera refuses to remarry at first but agrees after Rasheeda’s persuasion.

Saleem arranges an intimate nuptial for Muneera and Majid. Muneera leaves the house leaving Asif behind for a couple of days. Although Asif keeps asking the reason for her departure, Muneera beats around the bush, ignoring his growing questions. On the wedding night, Majid clarifies that he wants Muneera to treat his son as her own. In Muneera’s absence, Sardar starves Asif and neglects him. Rasheeda and Salma feel relieved to see Majid and Muneera getting along together. Finally, Majid decides to bring Asif home. Before reuniting him with Muneera, he takes him on a shopping spree and spends abundantly on him. Both of them accept each other wholeheartedly and together with Muneera they lead a happy life. Muneera insists Majid brings his son Amir home soon so he blends in with everyone. Rasheeda brings her son, Tahir’s proposal for Sobia while Salma agrees to marry them when they grow up.

Muneera’s sister, Shakira gives birth to a baby girl. Since her in-laws wanted a boy, they oust Shakira from the house. Muneera laments over Shakira’s fate and fears that Sardar will treat Shakira as brutally as she treated her. Seeing Muneera’s bewilderment, Majid arranges a house for Shakira so she can live there in peace. When Majid brings Amir home, Muneera feels compelled to treat him with extra love and care to repay Majid’s favors. Amidst everything, Asif is neglected and he starts envying Amir after seeing him getting all the attention. Eventually, he becomes an ill-mannered boy when Majid starts creating a difference between him and Amir. Sobia insists Salma change her school after one of her friends witness her poor living condition. She becomes complexed as she portrayed herself as a rich girl among her friends.

Majid becomes abusive to Asif when he fights with Amir over childish matters. He labels Asif as a “brute” who is mannerless and not favorable to introduce to anyone. When Majid goes on a business trip, he brings toys for both Asif and Amir. However, Amir likes Asif’s toy more and a battle starts between the two. Majid snatches the toy from Asif and hands it to his son. This affects Asif severely and in his fury, he smashes the toy. Majid threatens Muneera to send Asif to Saleem’s house if he keeps practicing his violent behavior. Amidst the chaos, Asif turns into a brilliant student whereas Amir remains average in his studies. As the children grow up, Asif dreams to become a bigger man due to his determination to see his stepfather downgraded.

Majid decides to send Amir abroad for higher studies despite his low grades and refuses to send Asif, claiming that he cannot afford the tuition fee for two sons together. Asif feels heartbroken as he always wished to go abroad for his studies. Seeing him lost, his friends indulge him in the habit of smoking. Despite Amir’s disinterest, his father keeps pushing him to study business so he can take over the family business. Sobia grows up to be an outspoken, chirpy girl who aspires to be a doctor. She keeps criticizing her mother for crying over her financial status. Her cousin and childhood fiancé, Tahir adores her and wants to marry her soon. After marrying off her elder daughter Shaista, Salma starts worrying about Sobia’s marriage. Majid suggests Salma let Sobia pursue her studies and offers to take care of her tuition fee.