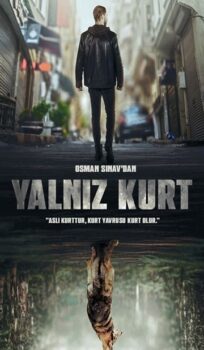 Yalnız Kurt recounts the exploits of Davut Bahadır, a hermit who has been living in solitude, against the country’s top spy; Fettah Dahhak. Fettah has been wreaking havoc in the country by penetrating into the country’s top civil and military establishment. By exposing the character of Fettah, the drama looks to draw an analogy between the drama villain and Turkey’s government’s most wanted man; Fethullah Gülen.

Davut Bahadır has been living in a forest for many years. He used to serve in the army in his youth where he earned the title Kumandan. A flashback to the 1960s reveals a village being plundered and its villagers killed. The only survivors are two young boys, Yavuz and Khalid. Davut takes them both to an orphanage and vows to revenge the death of their father, Kemal Yıldırım who was the main target of the attackers. Davut’s investigations unveil a local, Fettah Dahhak the main culprit who has been acting as an American agent against the state. Fettah’s grandfather was expelled from his native village for treachery against the state and now Fettah has chosen the same abominable path. While Kemal Yıldırım was acting as an informer to the state intelligence. Perhaps he knew some secret against Fettah for which he had to sacrifice his life.

Some years lapse and Kemal’s son, Yavuz has grown up into a man. While hunting with his young son, Yiğit, he leaves a lone wolf unhurt. When his son questions him as to why he spared the wolf, Yavuz states that the lone wolf is not dangerous for them and advises his son to always support the weak against the powerful and never become a tyrant. When back home, some attackers kill Yavuz and his wife while injuring the young Yiğit. The wolf Yavuz had spared then rescues Yiğit’s life by saving him from the harsh weather. When Davut visits the cursed house, he finds Yiğit in an unconscious state. He takes care of the young boy for a month and then leaves him to the authorities after having a successful test of his courage.

The scene then turns to the present where Yiğit has assumed a new identity, Altay Kurtoğlu, and has become a boxer. He defeats an American boxer in the cage while a gangster, Doğan successfully puts his bet upon Altay. While the fight goes on, Doğan’s wife, Esra searches for a friend in the building. She finds him in the tortured state who reveals that Fettah and his men including Nizam and Doğan are after every person involved in the Kemal Yıldırım case. Esra runs from the building leaving him to the mercy of Doğan’s men. It seems that Doğan is not her first husband and she is tied to him forcefully. During her run, Altay rescues her from Doğan’s men and then both search for Esra’s daughter, Ela. Altay takes Esra to Davut’s hermit where she stays during the night. The next morning, she reaches her friend Saadet’s house and finds Ela there who had taken refuge there. Doğan too arrives there to take Esra while Ela hides and runs again. Esra tries to justify her action of running from the building last night. Doğan puts her in tight house custody and goes to meet Nizam who suspects Esra of accompanying the enemy (the man whom Esra was searching for). Altay appears in Esra’s room and both escape the tightly secured house. Esra catches a bullet during the run and dies when both reach Davut’s home. Altay goes to search Ela while Davut buries the dead body. Altay gets a clue of Ela’s whereabouts and reaches an abandoned building. There, he is surprised to see Esra pointing a gun at him. On the other hand, Davut vows to reinvigorate his battle against Fettah Dahhak despite past defeats.

Altay is taken into custody by the girl who turns out to be the twin sister of Esra, Sarah, and works for the state intelligence agency. She questions Altay about the whereabouts of Esra and refuses to believe that Esra is dead. She then takes Altay to Esra’s grave to confirm the veracity of Altay’s claim and bursts into tears after seeing Esra’s dead body. Altay finds and rescues Ela from a group of human smugglers who smuggle the children to Europe. Nizam has been operating the group. Doğan once again confronts Nizam and requests the group’s top brass to replace Nizam with him. Sarah decides to assume Esra’s identity in order to unveil Doğan’s truth and returns to Doğan. She starts spying on Doğan’s activities. While Davut uses his resources to find the reality of Doğan and discovers that Doğan has been running various successful businesses that are apparently the result of his illegal activities. Sarah manages to learn the name of Yavuz Yıldırım, a name on which Doğan’s group is currently focusing. She then passes the name to Altay who becomes furious seeing the name of his father and demands to know the truth from Davut. Davut reveals how Yavuz and his friends were killed after the betrayal of Yavuz’s brother, Halit. Halit had tipped off the details of an operation that was meant to annihilate the existence of Fettah Dahhak and his network from the country. Consequently, Fettah used his influence in the state institutions to kill Yavuz and his friends. They were labeled as traitors while Fettah kept enjoying indemnity. Davut had lost his soldiers even before the start of a war against Fettah due to the betrayal of one person, Halit. Altay vows revenge and Davut shares with him all his findings collected in the past 60 years.