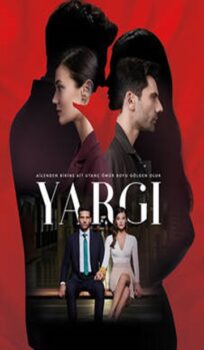 Below is the episode-wise story of the drama ‘Yargı’ in English. First, let’s look at the characters played by the cast:

A girl’s corpse is found and prosecutor Ilgaz is informed about the case. During another case, a lawyer, Ceylin messes with him and he puts her behind the bars. He goes home to find his father, commissioner Metin shouting at his younger brother, Çınar for losing the credit card. The card is found near the girl’s dead body and Çınar becomes a murder suspect. Ilgaz takes Ceylin’s help to fight for Çınar. All evidence turns against Çınar. Ceylin tries to save him by hook or crook but both Metin and Ilgaz refuse to betray their morals and stay honest. Ceylin receives emotional birthday wishes from her sister, İnci and terribly misses her. Prosecutor Pars, leading the case, gives hard time to Ilgaz and his family. Metin gets furious at Çınar for his actions and seems like some past incidents are being hidden. The body is identified and Ceylin is shattered to find that it is her sister İnci who was murdered.

Ceylin rushes to Çınar for investigation and beats him for hurting İnci. Çınar denies all allegations and refuses even knowing İnci. Ceylin backs out as Çınar’s lawyer but Ilgaz wants him back so she can have access to updates of her sister’s case. Ceylin’s mother refuses to accept İnci’s death while her father scolds her for defending Çınar. Engin is a colleague of Ceylin and stays with her through hard times. His father is a lawyer who is approached by İnci’s father to fight against Çınar. Metin sees İnci’s corpse and apologizes to Ceylin on Çınar’s behalf. Ceylin takes back the case as Çınar’s lawyer to access information and approaches İnci’s friend Merve. She finds out how İnci lived a secret life with a boyfriend and other luxuries. She finds out İnci was given a car. Ceylin and Ilgaz are shocked to find İnci’s picture with Metin.

Ilgaz rushes home to question his father who was the officer when Ceylin’s father, Zafer was falsely detained in a case. He was helping İnci’s family out of guilt. A new criminal, Serdar is put to jail and warns Çınar to keep mum and not spill the beans. At the first trial, Çınar again denies the blame and Ceylin supports him. Still, he is put behind the bars. Upon Çınar’s information, Ilgaz and Ceylin visit Ozan and Nurjan, İnci’s professor. Ceylin steals their toothbrushes for a DNA test. She secretly takes officer Eren’s help and DNA matches İnci’s nails and scars on the body. Meanwhile, the culprits attempt to flee from the country. Engin and Ilgaz feel uneasy about each other whenever Ceylin is with each of them. Ceylin finally cries her heart out and Ilgaz pacifies her. Pars finds evidence that shows İnci being beaten by Zafer. He becomes a new suspect while Ilgaz deduces it to be a drug case that is forcing Çınar to be silent.