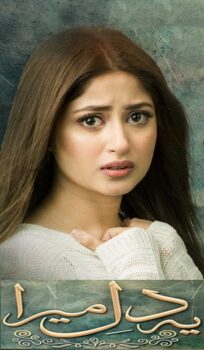 Though apparently a lively girl, Noor has something to fear probably due to his disturbing past. She experiences frequent nightmares. Noor’s father, Mir Farooq is possessive about her and tries all means to protect her. Like Noor, Amaan too has a dual personality. He seems a successful businessman vying for expansion but some unknown thoughts perturb him when he goes into solitude. He seems to know Noor and her father and meets them through a common friend Ghauri, where he hints at knowing Noor’s past. However, he does not respond to Noor’s questions about how they met before. With the passage of time, Noor gets closer to Amaan.

After experiencing a loss in the business by an unknown rival, Farooq goes to his secret wife, Sahira who envies Noor. Both do not enjoy an amicable relationship. Mir Farooq pretends to be nicer in front of others but has some secret to hide.

After applying for an internship in Amaan’s company, Noor gets a rejection by Amaan initially he considers her later. Amaan’s weird behavior at the workplace compels her to leave. Unaware of her father’s second marriage, Noor praises him for honoring her dead mother. On the other hand, memories of the past continue to haunt Amaan. Becoming aware of Noor’s nightmares, he gradually falls in love with her. After Amaan’s proposal and subsequent consent by Mir Farooq, both get engaged. Noor is able to identify a railway station in her nightmare and questions her father about any unpleasant event in the past which he denies.

Amaan collides with Sahira purposely and conspires with her in order to expose Farooq’s secret marriage. Tired of her husband’s ill behavior, Sahira too promises to aid Amaan. A flashback reveals his childhood when he is snubbed and humiliated by his uncle on trivial matters. Torn between love and revenge, Amaan refuses to marry Noor but later resolves to marry her in order to avenge Farooq since he is the murderer of his parents. Noor’s aunty returns from America and is dubious about the mysterious death of her sister. Amaan exposes Mir Farooq’s other marriage and numerous affairs in front of Saihra. Mir Farooq too anticipates some danger.