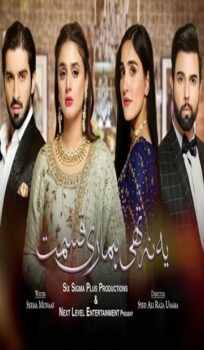 The thematic interest of the drama shares a casual slice of life, particularly how beauty can be deceiving and good looks don’t always reflect on nature. The drama revolves around the story of two sisters, Muntaha and Alishba, who are quite the opposite of each other, with different perspectives of life. Muntaha, the elder one, is well educated and works at a notable job in a renowned firm. She is often referred to as omnicompetent by her parents and people who know her since she also knows all the tricks in the kitchen as well. Whereas her younger sister, Alishba is a carefree girl having a sense of pride because of her beauty. Her objective in life is to find a rich man in order to taste true freedom. She isn’t very good at studies and house chores.

The story proceeds when Yasir’s family sends the proposal for Muntaha. Yasir, a young and rich boy, lives in a joint family with his parents and paternal relatives. He admires girls with looks and feminine uplift. When he gazes upon Alishba, he leans more to her getting mesmerized by her beauty and carefree nature. He tries counterarguing with his father over Muntaha’s proposal. But once he gets the idea that Alishba doesn’t feel the same way, he steps back and decides to marry Muntaha.

Ayan, Yasir’s cousin,  is just as carefree as Alishba with no aspirations and motivation to be better in life. He doesn’t have a job nor does he have a proper degree. During the wedding ceremonies, he falls for Alishba and tries flirting with her. However, she immediately turns his efforts down. Muntaha undergoes a kidnapping incident on her wedding day. While everyone waits for her to come, she tries to escape the kidnappers, falls unconscious, and is sent to the hospital. Being completely unaware of the turmoil Muntaha is going through, her father convinces Alishba to marry Yasir instead, to save his integrity in society.

Later, when Muntaha is rescued, Ayan’s mother thinks of it as an opportunity to settle his son for someone stable and sends his proposal for Muntaha. What ensues is a total turmoil resulting out of two marriages due to mismatched personalities.