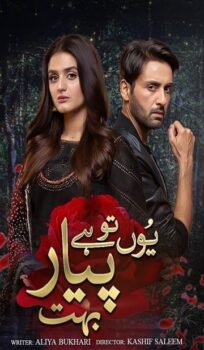 Below is the episode-wise story of the drama ‘Yun To Hai Pyar Bahot’. First, let’s look at the characters played by the cast:

Aima is a hardworking girl who works and studies simultaneously to pay for her family’s expenses. Zain; a struggling musician is Aima’s love interest and maternal cousin who surprises Aima’s sister, Nazia on her birthday. The next day, Nazia goes for shopping and injures her foot in the middle of the road when a stranger named Mohsin drops her home. The rich stranger resides with his wife Roohi and daughter Sonia who asks around for his ex-wife and two daughters.

Aima complains to her mother about her father’s doings. Zain gets his first song released and takes Aima and Nazia for dinner where she runs into Mohsin. Zain asks Aima for marriage and she asks him to wait. He quits his job but his song goes flop, so his friends blame him. Moreover, he almost loses his mother’s gold that he gave for collateral.

Zain is unable to pay back and loses his deceased mother’s jewelry.  Mohsin and Roohi look for a suitable boy for their daughter, Sonia, who rejects all proposals. Sonia runs into Zain at her friend’s children’s school. She likes Zain and joins the school as a teacher.  Zain asks for Aima’s hand in marriage but she refuses.

Aima looks for a job as a lawyer’s assistant but gets rejected. Nazia tells Aima and her mother that she wishes to work. Rejected by Aima, Zain falls ill and Sonia visits him while Aima also comes to see him. Sonia misleads her into thinking that Zain is dating her. Later on, she plays dumb in front of Zain, as well, and even tells her parents about him.

Aima calls Zain unworthy and ends their relationship for good. Zain’s landlord kicks him out. Sonia takes Zain home and tells her parents about starting a music company to launch Zain. Roohi insults Zain for trapping a rich girl and Zain tells her about his platonic feelings. He moves to Lahore and finds hospitable neighbors, Maqbool and his wife, Dina.

Aima gets a job at a law office. Nazia gets selected for a modeling position. Zain meets Dina and compliments her singing talent. He asks Maqbool about his relationship with Dina, and he ignores the topic. Dina tells Maqbool that they can tell Zain about their five-year-long secret. Aima goes shopping with her mother who spots Mohsin.

Zain asks Dina about the past and she avoids the topic. Nazia finds out that her modeling job was fake and runs into Zain’s friend, Fakhir who shows interest in her and finds her a teaching job but she rejects it. Sonia goes to Aima’s office and accuses her of driving Zain away and the two quarrel. Meanwhile, Mohsin searches for his family.

Maqbool and Dina reveal to Zain that they ran away from home when Dina’s parents died and her relatives tried to sell her. Sonia calls Zain, and tells him about Aima misbehaving and Zain defends her. Roohi goes to Aima’s house and spots her mother, Talat. She informs Sonia about Aima and Nazia being her step-sisters. Meanwhile, Aima and her mother find a marriage proposal for Nazia.

The ladies come to see Nazia but choose Aima instead. Zain arranges a song recording for Dina. Roohi sends goons to vacate Talat’s house and then comes face to face with her. By chance, Zain comes to the town at the same moment and visits Aima’s house who fights with Zain and tells him to leave and he meets Sonia. Aima’s boss gets a stay order for her house.

Zain helps Aima’s family in restoring their home. Aima accuses Zain of cheating with Sonia. The two quarrel and Zain goes back to Lahore. Zain and Dina have their first recording. Aima assists an NGO where she runs into Roohi who asks her friend to kick Aima out after realizing who she is. Meanwhile, Nazia daydreams about her boss, Rehan.

Roohi hides what she did with Talat, from Mohsin. Shehbaz, Maqbool’s old acquaintance advises him to return back as Dina’s family isn’t as strong anymore. Roohi taunts Aima, so she answers back, and the two quarrel. Aima goes to Lahore for a conference. Nazia gets offered a modeling job by Rehan, as the fondness between the two grows.

Rehan finalizes Nazia as a model. Sonia insults her in the boutique but Rehan defends her. Sonia informs Roohi about the incident at Rehan’s boutique and Roohi vows to talk to Rehan’s wife, Noora. Aima attends a conference in Lahore and runs into Zain. Zain taunts Aima about her boss, Fakhar, and tries to tell her that he never gave up on them.

Rohan has a fight with his wife Noor. Roohi meets Noor and complains about Rohan’s interest in Nazia and his actions for insulting Sonia, so Noor confronts Rohan. Nazia does a modeling assignment for Rohan. Meanwhile, Shahbaz betrays Maqbool and brings Dina’s cousin brother to Lahore. Scared, Dina and Maqbool flee, leaving Saru with Zain. Maqbool makes Zain promise to never reveal Saru’s identity to anyone.

Rohan gifts Nazia a house terming it a modeling package. Aima disapproves but her mother sides with Nazia as they prepare to move in. Sonia finds Nazia to a model on the rise and tells Roohi. Meanwhile, Zain takes care of Saru and drives away Shahbaz.

Everyone moves into Nazia’s new house. Aima’s mother refuses to take Aima’s salary and starts siding with Nazia over everything. Aima notices the change and misses Zain. Meanwhile, a man named Saad visits Mohsin but Roohi lies and sends him away. Nazia runs into Fakhir at Rohan’s new office. Zain gets a new accommodation for himself and Saru where his paternal aunt takes care of them.

Rehan and Nazia go for lunch where Roohi and Noor spot them. Noor confronts Rehan in front of Nazia who leaves and Rehan portraits his wife as obsessive. Aima runs into Sonia and Roohi at Noor’s house where they get into a verbal spat. Sonia misbehaves with Noor for not firing Aima. Meanwhile, Zain’s friends refuse to leave their work to record a new album.

Aima files a case against Mohsin. She also stops working with Noor. Mohsin gets angry at Sonia for spending huge amounts of money. Roohi sides with Sonia and supports her to pursue Zain. Rehan gifts Nazia expensive jewelry and promotes her who wonders about his boss’s intentions. Fakhir likes Nazia and tries to clear her name in front of the other colleagues.

Aima asks her mother to file a case against her father, Mohsin, but she refuses. Noor apologizes to Aima for Roohi’s behavior. Bobby goes to Lahore and signs Zain who finds out about Sonia’s company and rips the deal. Fakhir asks Nazia to stay away from Rehan. Rehan asks Nazia to marry him.

Nazia’s mother asks her to stay away from Fakhir but Aima requests her to marry Nazia to Fakhir. Her mother shuns her and accuses her of being jealous. Nazia and Aima attend Fakhir’s sister’s wedding where they run into Zain. Mohsin finds out that the girl he once dropped home was his daughter. Roohi promises Sonia to bring Zain back.