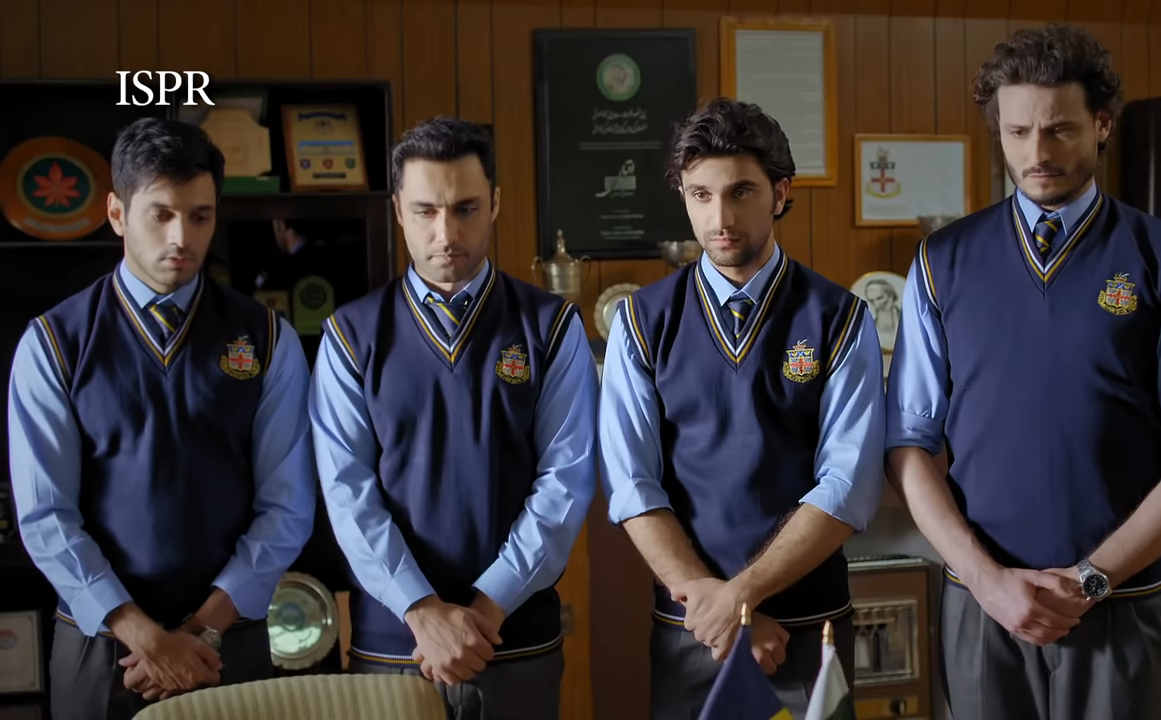 So, the wait is finally over and episode 1 of Ehd e Wafa, a much hyped new serial of HUM TV is on air. A drama which appears rich in characters and deviated from traditional domestic life stories of love, marriage and divorce. Let me know what are your opinions and expectations from this drama? In the coming lines, I am going to review episode 1 of the said drama. First, I will summarize the story in fewest possible words and then will review and rate plot, dialogues and acting. Let’s start.

We are introduced to SSG (Special S Gang) whose members try to escape hostel but are caught by hostel warden. They rescue themselves from Principal’s rebuke deceiving him and then avenge the culprit who spied on them.

In the opening scene of ‘Ehd e Wafa’ episode 1, four boys mysteriously attempt to escape a building in the night’s darkness. When they are about to jump over the outside wall, lights get on and they witness a crowd gathered around to catch them. It is revealed that the building is of a hostel and the boys have been caught by hostel warden named Firdous.

The warden then boasts of his efficiency and orders another student Khursheed who is his son to capture a photo of them. The conversation between the delinquents reveals that the whole plot was developed by one of them named Shah Zain. The warden then mocks them one by one except the last one whose presence there amazes him. The boys are identified as Malik Shah Zain who is a landlord’s son, the other one as Shariq Habib who is a topper. While remaining two are Sheryaar Afzal and Saad. It was Saad whom warden was surprised to see at the scene.

In the next morning, all four are standing in front of notice board of college where their pictures are displayed about night’s event. They have to appear before the college’s principal as punishment and to explain their position. The college is identified as Lawrence College, Ghora Gali.

They are worried now about the situation and conjecture who exposed their plan. They nominate Khursheed as culprit due to a previous incident. A flashback reveals all boys eating out in mess where these four boys mock Khursheed’s father over his strict behavior. He defends his father for his professionalism. Then they humiliate him over feminine names of both father and son. He resolves to avenge them all one day.

Now it is obvious that it was Khursheed who spied on them. Shah Zain appears to be their leader who proposes a plan that will save them from Principal’s chide and that all boys should stick to it.

In the next scene, some college girls are singing and enjoying in a classroom. Singer is identified as Rani who has failed for three years and still enjoying even before start of her paper. During paper, she cheats with examiner’s consent but is caught red handed by college Principal. Her confidence does not rescue her and upon search almost a whole book emerges from her possession. Consequently, her paper is cancelled out. Instead of repenting, she agitates over all this. The examiner promises her to help which she refuses.

Later, the warden complains the Principal and terms the boys as SSG (Special S Gang) as they proclaim themselves due to their names starting with letter ‘S’. Principal inquires them but warden is of the view that their parents must be informed to apprise them of their sons’ activities; a notion that Principal denies.

Then, they execute their plan and Saad excuses that he wanted to go out to wish her mother birthday by phone and wanted to surprise her. They also satiate warden’s ego by flattering his efficiency. The plan works and the Principal gives them a chance.

A family in Murree

Somewhere in Islamabad, a girl leaves her college and goes to her home with her driver. She is in a hurry because she has to set off for Murree with her parents to attend invitation. Her family reaches Murree and all family members and cousins are delighted to see each other.

Sub Major Firdous calls Saad’s home to wish his mother birthday. It is Brig Faraz’s home. Saad’s sister attends the call and exposes Saad’s lie about mother’s birthday. Knowing the truth, he complains about Saad’s activities. Saad’s father, Brig Faraz comes home. His servant informs him about his wife going out and shows extreme modesty towards Zoro; Saad’s pet dog because Saad had instructed him strictly to respect his dog. Rameen tells his father about Saad’s escape.

In the next scene, we see college boys playing football. It seems that the boys are intriguing a plot. We learn that Saad was purposefully losing at the hands of Khursheed to make him a hero. At dinner, they appreciate Khursheed’s performance and tempt him for going out and having food. They offer him their group membership. He promises loyalty, honesty and secrecy in exchange to the group to delete their photo of last night incident. They resolve to meet at midnight.

At night, they help Khursheed to climb the outer wall of hostel. When he is about to jump outside, they leave him and whistle the danger siren. All hostel members gather to assess the danger only to see Khursheed over the wall about to jump. Firdous is astonished to see his own son doing this while four friends smile at him sarcastically.

Majority of the characters are exposed in this episode. The major focus of the drama is obviously SSG (Special S Gang). We observe entry of the Alpha Bravo Charlie star Brig Faraz for the first time since the hit drama. The story is lively and we see plot developing swiftly. The dialogues of the drama look realistic and fit into the situation.

Though acting of all characters was appreciably better but due to inclusion of some young cast, we can expect some deficiency. I feel that Rani’s acting was not up to the mark and it seemed she is over acting. In the escape scene, outer wall looked unrealistic since it was in ruined state which is not appropriate to a hostel of this caliber. The scene where little girl stops another vehicle for driving slow looked misfit in the plot. When the girl’s family reached Murree, it appeared family members were just pretending to meet others and acting in the whole scene was shady.

Certainly, the opening scene was worth watching. Then, the scenes where SSG trap Khursheed in mess to retaliate him and when he tries to escape need to grab your attention.

That was all from ‘Ehd e Wafa’ episode 1. It will be interesting to see what will be warden’s response over his son’s mistake. What will Khursheed have to speak in his defense? We are also keen to know the connection between other characters. Please express your opinions in comments section.