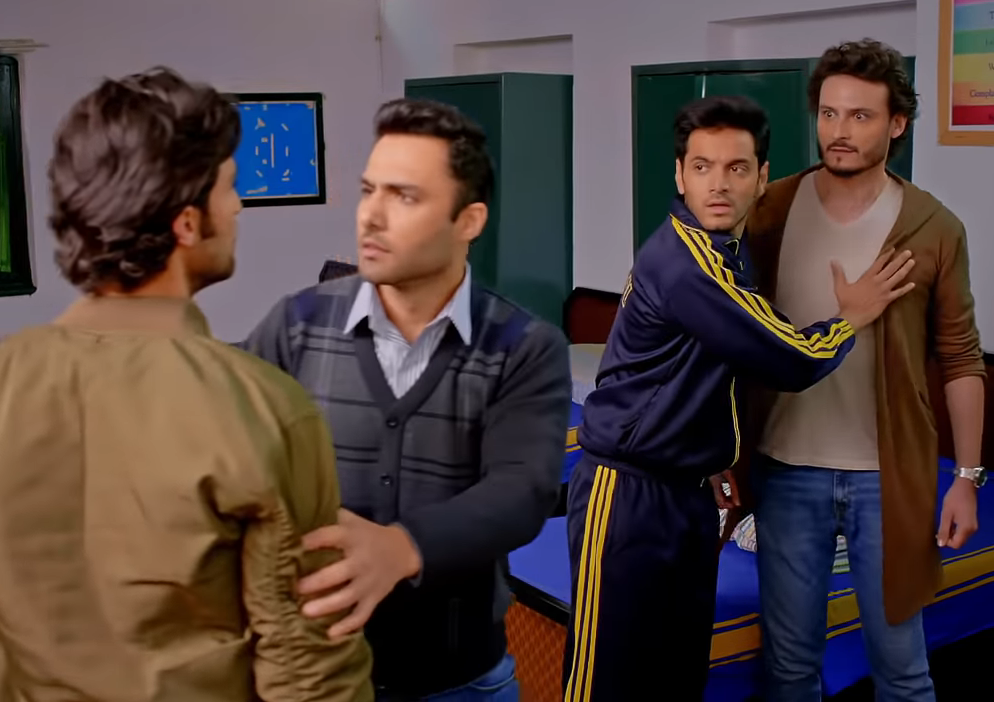 Ehd e Wafa has reached its fourth episode in no time. The fate of SSG boys is going to be decided. After their blunder in the previous episode, what is going to happen to them? Let’s find and review episode 4 of Hum TV drama Ehd e Wafa.

SSG except Shariq is ordered to leave the hostel and prepare for exams privately. A rupture emerges in the gang when Shah Zain and Saad tussle. All boys pass the exam except Shah Zain who enjoys the perks of exuberant rural life alongside his grandfather.

Sheryaar’s father investigates his son tenderly about the reality. Sheryaar tries to conceal the truth but learns that the fate of all four friends has been decided and they will soon be ordered to quit college. On the other hand, Dua chides Raheel for his involvement in the incidence and maintains that she is an independent girl and can care for herself.

The college principal arranges a meeting with boys’ parents and reveals the findings of inquiry which has proved them all guilty of the offense. The grandfather of Shah Zain interrupts the principal twice and consequently blames him for the restrictions imposed on students. In this grave situation, he is more concerned about his horses. The principal gives the verdict of removal of boys from the college and hostel as well but they will be allowed to give the exam privately so that their academic career could not be spoiled. However, Shariq is able to get a probation period of one month in the hostel due to his little involvement in the incidence.

Shah Zain and Sheryaar pack for the home and reproach Shariq who is not willing to attend them and chooses to stay in the hostel. Shah Zain reminds him that it was Shariq who sparked the whole conflict when he informed about Dua’s presence. Shariq gets emotional and defends himself quoting his poverty and poor financial conditions. Khursheed bids Saad farewell and gives him all his photos Khursheed had taken.

Three friends in the hostel realize their mistake which has resulted in the humiliation of Saad. Shah Zain apologizes to Saad for running and ditching him. A scuffle erupts between the two and Saad slaps Shah Zain complaining about his behavior. Brig Faraz enters the room and asks Saad to leave. His forceful shutting of the door breaks the memorial picture of four friends.

After that, all three friends depart with their parents except Shariq who then misses them in the hostel. Shah Zain experiences a tremendous welcome upon his arrival at the native village while Saad will have to conceal the truth from the rest of his family. A glimpse of his darling dog Zorro exhilarates the dismayed boy.

Shah Zain’s father and grandfather argue about the importance of education. His father is wary of Shah Zain’s future now while the grandfather regards education as a useless business. He is of the view that society respects the powerful one however ignorant he might be.

The examinations are conducted and Saad tries to avoid facing his old friends. However, Shah Zain does not appear in the exams rather he is busy in horse racing. He kills his grandfather’s dear horse once it loses a race. The result of the examination shows that Sheryaar has topped the board while Saad stood second. Brig Faraz, displeased at the result, demands more of his son. On the other hand, Dua is also unhappy at her result despite her second position.

Saad faces a big question about his future decision where his mother advises him to choose the medical profession rather than becoming an army man. Rameen suggests his brother apply for both medical and army and choose whichever the result comes first. He is indecisive and confused and applies to a medical college where he again encounters Raheel and Dua. Dua is there for her own admission. She intends to leave the college finding him but he sacrifices his medical career and leaves college even without applying for the admission. Malik Allah Yar boasts of his intellect when he listens to shocking news about his loyal men.

The remorse of Shah Zain has not been enough to save the friendship of SSG boys. Even the stubborn hostel warden Firdous was feeling sympathy for the boys. The characters of Saad and Shah Zain are contrasted beautifully in this episode. Where Shah Zain gets a splendid welcome in his village and is cherished by his family, Saad goes under the scrutiny of his soldier father. Saad is more serious about mending his tarnished reputation. For the purpose, he abandons his old friends and evades them during the exam. On the other hand, Shah Zain has diverged from the academic path and is involved in buoyant activities.

Malik Allah Yar’s conversation with Shah Zain’s father exhibits a mentality that is still prevalent in rural parts of the country where education is still considered as worthless. Power is the ultimate commodity which one should hold in order to live a successful life.

Dua’s recurrent collision with Saad is indicative of a possible relationship between the two. Though she is angry at his presence in the medical college, her behavior towards her cousin indicates that she did not take the Murree incidence seriously.

The overall episode was an emotional one. The story progressed very fast as the hostel and college life has ended abruptly. While acting performances were relatively better considering the previous episodes.

(min:sec 11:18) The hostel scene where an argument between Saad and Shah Zain leads to a dispute is the climax of the episode. Moreover, the entry of Brig Faraz further intensifies the milieu. The breakage of the memorial picture of four friends indicates their collapsed fellowship.

(min:sec 18:17) Malik Allah Yar’s argument is also critical where he enforces his ideology of power. In his view, education only tames a man. The real worth lies in power. Educated class tends to regard the powerful ignorant ones. The scene depicts a dismal reality of our society.

A friendship that started in Lawrence College Murree has ended due to boys’ callous behavior. A big question lies ahead about the future of SSG boys. Will they ever be able to reunite again? And what about Shah Zain who has abandoned his academic career? Will he continue to follow the footsteps of his grandfather? Please comment on your opinion about the episode and also suggest ways to improve this review.