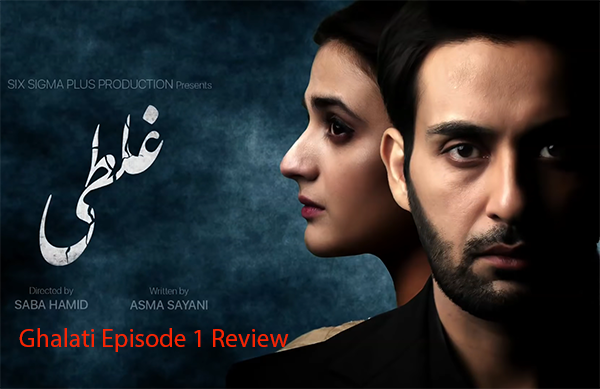 Here is the story and review of episode 1 of ARY Digital TV drama ‘Ghalati‘ which was aired on 19 Dec 2019.

The drama starts when Saad returns from Singapore with gifts for all his family members. His sisters; Aliya and Maira eagerly check out the gifts. The elder and married sister; Aliya complains that he did not bring anything for her in-laws. Both sisters and their mothers seem too greedy. Their mother; Zaitoon is a conceited and proud lady. Their conversation reveals that their paternal uncle; Shabbir supports them financially. Moreover, Saad is nikkah-fied to Shabbir’s daughter; Zaira who lives in UAE with her family.

Aunty Samina comes to meet Saad and objects to her sister; Zaitoon that she should not have engaged Saad to Zaira who is too rich for them and will not be able to accommodate herself with them. Previously the family was living in an old neighborhood and they have shifted into this big house which is indeed owned by Shabbir uncle.

On the other hand, Zaira is learning to cook to prove herself in her in-laws. A phone conversation between Saad and Zaira shows both are in a romantic relationship. Saad returned to Pakistan as he could not adjust abroad. Zaira complains of not consulting her about leaving the job abroad which infuriates Saad. However, Zaira then calms him down. Saad’s cousin and Samina’s daughter; Gurya gets closer to Saad but he ignores her.

Aliya is not happy with her in-laws. Her mother in law often taunts her for being childless and being brought upon uncle’s support. Her husband; Asad then censures Saad for not bringing any gifts for them. Zaitoon shrugs off Aliya’s reservations in this regard and shows more concern for Maira. Saad’s brother; Sohail seems to be the only rational person in the family. He looks self-reliant as he is doing a job instead of seeking support from Shabbir uncle.

Zaira’s mother; Nafeesa has reservations over Saad’s capabilities since he is unemployed now. But Zaira is too blind in his love and supports her finance in front of her mother. A portrait gift from Saad pleases her. Saad is eager to marry her and to complete his family. He can’t live alone anymore and that’s why he returned from Singapore.

In Dubai, Shabbir goes through a financial loss and loses all his investment. Now, he is out of options to return the bank loan. His wife suggests him to sell the house in Pakistan which he had gifted Zaitoon’s family. He opposes the idea, fearing Zaitoon’s reaction. Since there is no other option, they decide to take it back but hide this decision from Zaira. They land in Pakistan where Zaitoon thanks them for gifting such a big house. She lies that Saad is out for an interview but indeed he is sleeping in his room. Finding circumstances unfavorable, Shabbir hesitates to talk about the house.

Saad then showers his love for Zaira who too can’t imagine her life without him. Shabbir is concerned about Saad’s job and motivates him for upcoming bigger responsibilities.

Zaitoon gifts Zaira a dress for the upcoming Eid. Zaira though does not like it accepts just to please her. She is concerned about Zaitoon’s happiness. Saad thanks her later for this act. They go out for shopping and enjoy. Zaitoon discusses Maira’s upcoming marriage with Shabbir in order to grab some money.

Shabbir, at last, musters up his courage and describes the financial difficulties he is currently going through. Moreover, to meet the deficits, he wants to sell this house. That’s why they should shift to their old house for the time being. This revelation infuriates Zaitoon and she threatens to divorce Zaira if they ever had to leave this house.

Zaira is accommodating and prefers others’ happiness. She is quick to admit her mistakes. When Saad rages at her for complaining that he did not consult her before leaving the job, she quickly apologized and calmed him down. She accepts the dress which she dislikes just for the sake that her mother in law does not get hurt by her refusal.

Saad is unable to find a job and is going through financial difficulty. The fact that he has to meet family responsibilities being the eldest family member troubles him. That’s why he sometimes becomes super angry very quickly. Still, he loves Zaira immensely and dreams of a new life with her.

Zaitoon is a greedy and haughty woman. To satisfy her greed, she is even ready to sacrifice the happiness of his son. Likewise, she seeks reliance from others and is always there to defend her children. However, she discriminates among them. She has more concerns for Saad and Maira whose marriages are near. On one hand, she happily gives money to Saad but denies giving any expense to Sohail quoting financial difficulty. She shows no interest when Aliya complains mistreatment of her in-laws.

That concludes our review of episode 1 of ARY Digital drama ‘Ghalati‘. Please comment your opinions and suggestions.