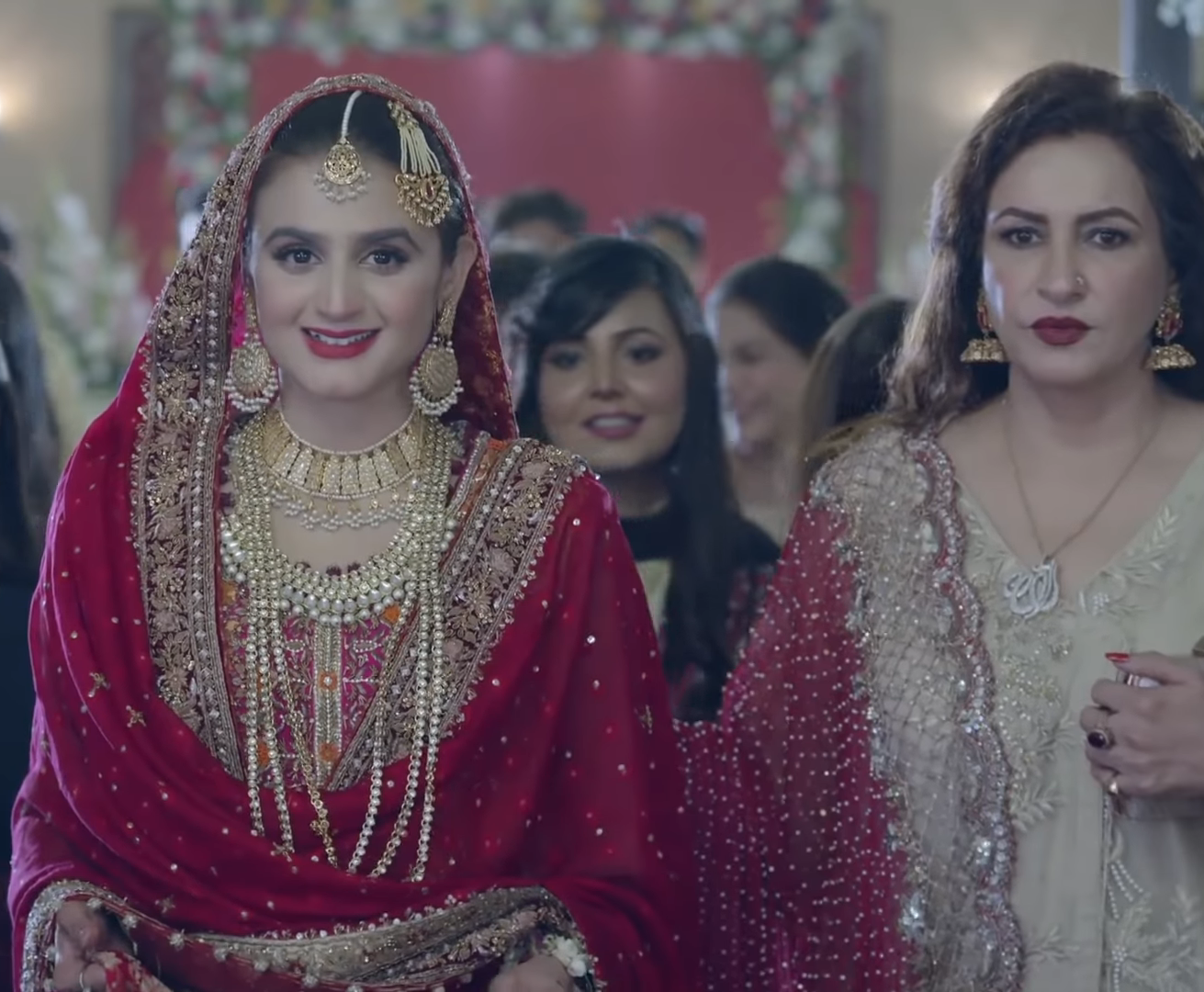 Here is the story and review of episode 2 of ARY Digital TV drama ‘Ghalati‘ which was aired on 26 Dec 2019.

Nafeesa regrets her decision of marrying Zaira in such a greedy family. She is not willing to accept Zaitoon’s behavior. Shabbir is calm and thinks of a solution. Zaira then complains that they did not tell her what they were going to do. They didn’t take her into confidence.

Saad objects to his mother’s behavior who now accuses Shabbir of doing all this just for profit. She terms financial problems fake and conjectures that Shabbir got a better deal in exchange for this house. That’s why he wants to sell it. Saad defends his uncle but it produces no effect upon his mother. Sohail also tries to explain Shabbir uncle’s position but Zaitoon is not ready to listen to even a single word now. Saad is resolute that he will not divorce Zaira whatever the circumstances may be. He then consoles Zaira who is shocked and can’t imagine living without Saad.

Aliya then comes up with a scheme. She is cunning enough to look beyond the wall. She points out to her mother that becoming angry is not the solution of their problems. They should act rather wisely. She expects her mother to show consent to Shabbir’s decision. Later they should ask for an early marriage between Saad and Zaira. Since Shabbir uncle will not send Zaira to a small home, he will definitely arrange a better house for her. Zaitoon consents to the idea and asks forgiveness from Shabbir for her rude behavior. Shabbir again explains his position that he had no other option than to sell the house. Later, Nafeesa doubts Zaitoon’s repentance considering her previous stubbornness but Shabbir clears her doubts.

Afterward, Zaitoon’s family returns to their old neighborhood and poor condition of the previous house bothers all. Zaitoon now again criticizes Shabbir and dreads how they will live here now. Aliya’s mother-in-law mocks her for returning to the old home. While on the other hand, Samina shows fake sympathy that her sister was kicked out of a lavish house. Zaitoon lies that they will return soon. Samina enquires about Saad’s marriage day just to confirm whether their relationship still exists. Gurya is happy that Saad is back. She too is suspicious why Shabbir uncle ousted them. Saad, however, ignores her.

Zaitoon now demands of Zaira’s early marriage before Maira’s one. She proposes to Zaira’s parents that they might gift their daughter a new house if they feel uncomfortable with their old house. She implicitly threatens them that Zaira will not be happy in the old house. Zaira, however, resolves to be content in every condition. Nafeesa is upset with Zaitoon’s demand and wants to review the decision of marrying Zaira with Saad. Shabbir is unwilling for a divorce. Instead, he cautions his daughter about Zaitoon’s attitude but Zaira is optimistic that Saad is on her side and everything will be okay after their marriage.

Saad finally gets a job and manages only four days’ leave for his marriage since he is on a probation period. We get an introduction to a new character which is Nafeesa’s brother who is not coming to marriage due to his domestic problems.

Samina continues to bother Zaitoon with her useless questions. Zaitoon now lies that the previous house is sold and Shabbir will gift Zaira a new house on her marriage. She is nourishing false hopes since Shabbir has not promised anything like that. Shabbir urges Zaira to be patient after marriage. Her mother also assures her of complete support.

Gurya laments that she could not get married to Saad due to her poverty since Zaitoon is chasing money. She decides to boycott this marriage. At last, marriage occurs but there is no gift of a big house. As a result, Zaitoon is humiliated in front of her sister and neighbors. Aliya is furious too as her in-laws will offend her more. Infuriated Zaitoon resolves that she will create hurdles in Zaira’s life to avenge her humiliation.

The house has become a bone of contention for both families. It symbolizes that material benefits are preferred over pure relations. Zaitoon was happy until Shabbir was supporting and helping them. But now, when he is having a difficult time, then instead of sharing his burden, she is aggravating his problems. She compromised for the time being and hoped to get a new one. Likewise, she boasted of a new house on purpose just to maintain her status. Her hopes were shattered at the marriage and now she could not control her inner feelings. Her selfishness is at peak now. Moreover, her intention of creating hurdles in Zaira’s life predicts that Zaira is going to have a hard time now.

Gurya is heart-broken for not being married to Saad. She tried her best to win Saad but he does not pay heed to her advancements. Samina’s efforts of creating suspicions in Zaitoon’s minds proved futile. While, Aliya is acting smartly just to secure her own position in her in-laws. She is aware that in the absence of a new house, she will be a permanent victim of her mother-in-law’s taunts. In the end, Nafeesa’s fears are coming true as she observes Zaitoon’s insulting attitude.

That brings an end to our review of episode 2 of ARY Digital drama ‘Ghalati’. Please comment your suggestions and opinions.