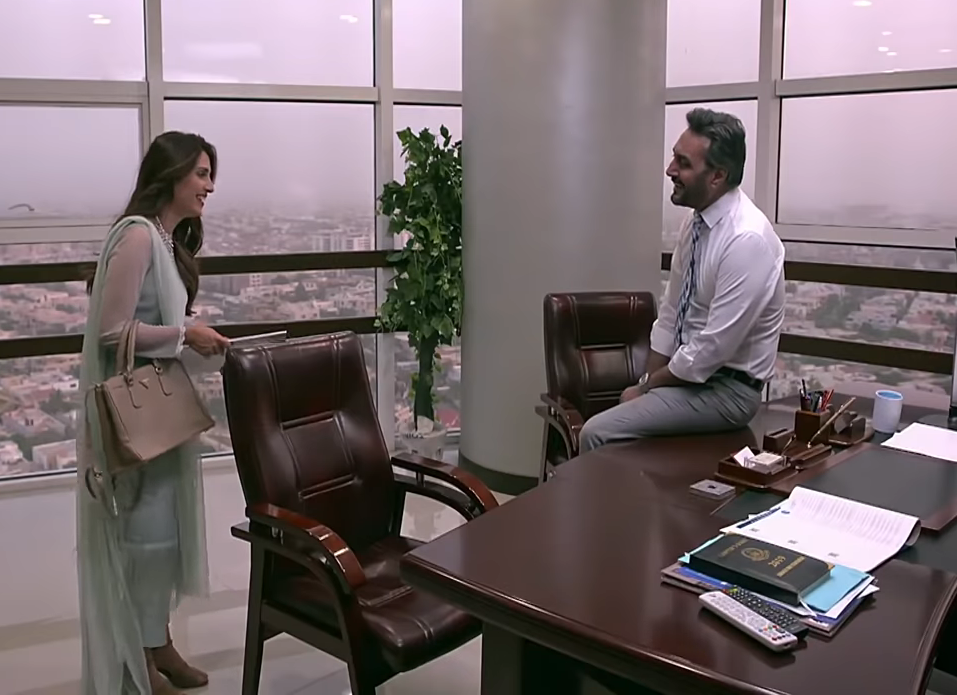 The direction of the drama is already set and we can see the plot going in a particular direction. Mehwish is inclining towards Shewaar unconsciously though she cares about her family. What impact her actions will bring down to Danish and Roomi’s lives. Let’s review the episode 7 of ‘Mere Paas Tum Ho’.

Danish changes his stance about Shewaar and permits his wife for the job. Mehwish can see her dreams coming true once she enjoys Shewaar’s favors.

Fissure emerging in the relationship

Finally, Shewaar is able to dilute the pure relationship between Danish and Mehwish and the later has started to abhor her husband’s habits. She is using Roomi’s school as a mask to cover up her avarice. Infuriated, when Danish expresses his fears, she asks him to return all the gifts and close the topic.

Danish’s peace is at stake. He tries to convince Mehwish that she should not fall in such a trap and should not expect which she doesn’t deserve. However, instead of understanding him, she confronts him and compares herself with him that he is jealous due to her high salary.

On the other hand, Shewaar is now willfully dodging Mehwish by not responding to her calls. Igniting the flame, now he is allowing her to burn completely herself in her desires. Fear of losing gifts and prospect of a luxurious life, Mehwish informs Shewaar about her husband’s intentions of returning gifts.

She plots with Shewaar how to tackle the upcoming situation. Shewaar resumes his strategy to ensnare her and adores her personality. She explains how he felt deprived when he saw her the first time. She is glad to hear all that but does not express her emotions.

After that, enraged Danish reaches Shewaar’s home only to discover a completely different attitude from him. He pretends friendly and frank and complains Danish of not bringing Mehwish with him. He also complains his loneliness and how he enjoyed the dinner with them and their company. In other words, Shewaar manipulates the naïve man whose views about him have changed now. He is unable to fulfill his intention of returning the gifts.

At night, Mehwish shows that she does not know what happened. Danish feels regret for alleging Shewaar’s intentions and blames himself. She behaves like she is not interested in the matter. Danish compares himself with Shewaar and regards himself lucky due to his gorgeous wife. Now comfortable in the present situation, he allows Mehwish for the job at Shewaar office. It seems both husband and wife have decided to surrender before the rich man.

In the next morning, Mehwish informs Shewaar about her husband’s consent and that she is coming for the job. After that, she gets ready especially for office and wears the same necklace which Shewaar had gifted on dinner. Danish talks with Shewaar about Mehwish’s job and her pick and drop arrangement. He entrusts Shewaar with responsibility. When Danish informs his wife about the arrangement, she wonders falsely and acts to get ready though she was already going. She leaves Roomi at Anoushy’s home where her friend is surprised to know all the happenings.

Danish feels troubled in the office and leaves early. On his way home, in his worried state, he collides with a bike and then a car.

In his office, Shewaar argues with his wife over office matters on the phone. Mehwish reaches office and immediately gets advance five months salary. At the job, she has to do nothing but to appease and console his boss.  Mehwish is feeling herself Elysian finding all the boons and perks. She knows the truth somehow behind all this benignity but is closing her eyes and surrendering herself to Shewaar.

She inquires his boss about his wife diplomatically who poses he is disturbed by his wife. Moreover, Mehwish tries to get closer to his boss and expresses frankness with him when she stops him from smoking. When Shewaar fears of losing her one day, she resolves she will not get away now because she thinks she has gained much power to defy her husband.

Danish is timid in front of forceful Shewaar. He is confused and naïve that he suspected a lonely man. Danish seems more vulnerable to present circumstances. He was angry at her wife at home but became calm when he confronted Shewaar. This shows how much power Shewaar has over his personality. In other words, he is reflexive in his actions and often changes his stance once he realizes the situation. When he collides with the car, instead of accepting his fault, he argues with the driver.

Mehwish’s greed has, at last, brought her to Shewaar’s grasp. She falsely cares for her husband. Though she has decided to go office but pretends over Danish’s phone.

The overall development of the plot was very slow. In a span of about forty minute’s episode, the story progressed slowly.  However, the dialogues of Shewaar and Danish were very powerful especially when Shewaar expresses his depravity to Mehwish. Above all, the acting performances of all the characters were superb.

The scene, where Danish arrives and Shewaar’s home and how Shewaar tackles him is intense and worth seeing. Moreover, starting scene of the episode where furious Mehwish throws gifts to Danish and asks him to return them is also forceful.

The story of the drama is so that everything is going according to audiences’ perception. Whether drama producer will bring some twist in the next episode or it will be the same monotonous episode once again. We have to wait for one more week to find the answer. Till then, please comment on your opinion in the comments section. Also, confirm how you found this review. That’s it from episode 7 of ‘Mere Paas Tum Ho’.