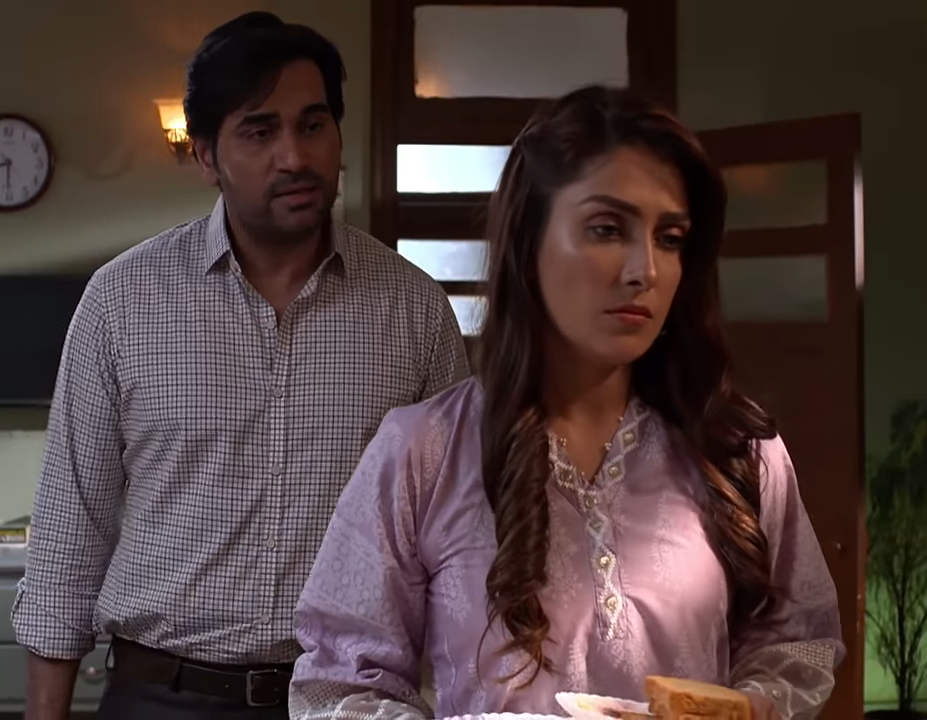 Here we are with episode 8 of Ary Digital TV drama ‘Mere Paas Tum Ho’. Owing to its competition with the rival channel drama, the episode promised a twist but failed to provide so. However, the proceedings were appealing as we can see the story approaching a crucial stage where fates of all characters will be determined. Let’s review the episode 8 of Mere Paas Tum Ho.

Distance between Danish and Mehwish stretches as Shewaar puts Mehwish in a trial which will eventually prove her loyalty for one between the two. Roomi gets admission and Danish’s errands are augmented.

Wounded at the road, Danish treats himself at home. He tries to contact his wife twice but she is busy soothing her boss. Shewaar’s blessings continue to shower upon Mehwish and she is glad to find herself in a splendid new world. In her office, she recalls Shewaar’s conversation and his ever-increasing interest in her and smiles. Shewaar is posing like teenage lovers. He laments why she loved a man like Danish who didn’t deserve her.

Mehwish with her son returns to the home where she finds the first aid box in the living room. Upon enquiring, her poor husband informs her about the incidence. She ignores it and fervently tells him about the car she has got who in turn is perplexed to know about the development.

The next morning, the couple discusses the kid’s admission and Mehwish lies that she will manage to get an advance salary. The truth is she already has deposited five months’ salary cheque in a newly opened bank account. Since she is a working lady now, she will not be able to perform her domestic duties. She has arranged a maid for cooking and other home tasks. Danish listens to the news with bewilderment and consents to her decision. He again speculates all these blessings from her boss and reminds her that she is invaluable and no one should be able to buy her with money and a car.

Their argument leads to Mehwish concluding that her husband is jealous of her. With his meager income, he could not buy her luxuries of life and now when she is in a position to fulfill her dreams, he could not see this. She maintains that she is doing all this for their son. She taunts him of his patriarchal mentality and shames him.

Danish has lost his peace and waits at the signal. In the office, the peon mocks him for his different socks. His presence in the café during lunchtime surprises his colleague who suspects of his strained relationship with his wife.

Mehwish is recalled to her boss’s office where Shewaar expresses factitious rage at one of his employees for his negligence. The case is of an employee’s death that was unable to get payment of 70 lakhs of rupees due to his non-entitlement. He pities the death and pretends to be compassionate. Indeed, the whole drama was set up to convince Mehwish of her boss’s empathic nature. She prohibits him from smoking who then feels delighted at her notion.

Shewaar is again in Mehwish’s room to offer her lunch. He evokes her audacity when she hesitates. At last, she agrees to prove her courage and appease her boss. At lunch, Shewaar is troubled to know about Mehwish’s leave the next day. He offers help for Roomi’s admission so that she could not have to take leave. In response, she relates her husband’s reservations about him and that he will consider it an attack on his self-respect. The boss amazes at Danish’s mindset and is fretful that she will leave the job due to his husband’s hostilities. He again puts her in doubt that he does not deserve her. The conversation concludes with Mehwish’s confirmation of coming to the office the next day.

At home, Danish and Roomi enjoy themselves watching television but she is confused while recalling Shewaar’s conversation. He again expresses his restiveness on the text message and she emboldens him with a reply. She lies to her husband that she has not got leave and now he should manage the admission himself.

At night, Danish complains about his insomnia due to Mehwish’s recent behavior. He asks why she concealed her cheque and new bank account. She defends herself claiming that he could not tell him due to his suspicions about her. She also defends his boss and maintains that Shewaar is compassionate enough to give 70 lakhs to an employee and it’s not a big deal for him. Moreover, his suspicious behavior is hurting her.

Roomi, at last, gets admission in a reputable school where the principal wonders his mother’s absence on such a special occasion.

Mehwish is promoted to the position of secretary to the board of directors and has a trip ahead to Islamabad. She has to attend a meeting with the foreign delegation as Shewaar’s assistant alongside her boss. He gives her only two options and forces her to lie at home when she hesitates. He plans that they will return in a day and her husband will not be able to know the truth. Mehwish is puzzled in this situation.

Mehwish’s job has disturbed the entire arena of the house. Danish is naive enough to let the maid go when she asks for a short leave. Mehwish is on the verge of choosing between deceit and truth as she considers Shewaar’s plan. She knows about ticket confirmation and enquires about the flight schedule from the office.

An abundance of benedictions has blinded the intellect through which Mehwish should think in the situation. She has stopped caring for her husband and love between both seems to freeze now. She is on the verge of deceiving her husband as she tightens her belt for the trip. Instead of caring for her husband’s wounds, she is passionate to boast about the car. Then, she ignores his socks incidence and instead is more interested in showing her branded clothes. She does not off the light when he asks her to do so. She cares more for her boss than her poor husband. Any sane man can asses that there is no sense of a third-day promotion but she has lost her sense in luxuries’ gleam.

Peace is a rare commodity in Danish’s recent life. The taste of his wife’s handmade meals has vanished and he finds himself in the café during lunchtime. At home, he is found cooking for himself and Roomi. The responsibility of educating his son and appeasing him lies on his shoulders that are already eroded due to the disturbing thoughts.

On the other hand, Shewaar is playing his cards cunningly in creating distances between both husband and wife. He poses himself as a caring and kind character that will go to any extent to save his employees. His actions have put Mehwish in a perplexed state knowing she will succumb to his ambitions.

The spat between Mehwish and Danish is interesting as an empowered lady has challenged the authority of her husband. Further, Shewaar’s announcement of promotion and his trip offer is a point which is going to be very crucial in the next episodes. Though she initially denies but considering her boss’s unhappiness, she is vacillating between the two thoughts now.

We are eager to see Mehwish’s response to his boss’s offer. Though the majority of the audience already know what will be the expected outcome. However, as the promo suggests, a great event is about to be unfolded in the next episode. Please comment on your thoughts and also suggest improvements for my style of review.