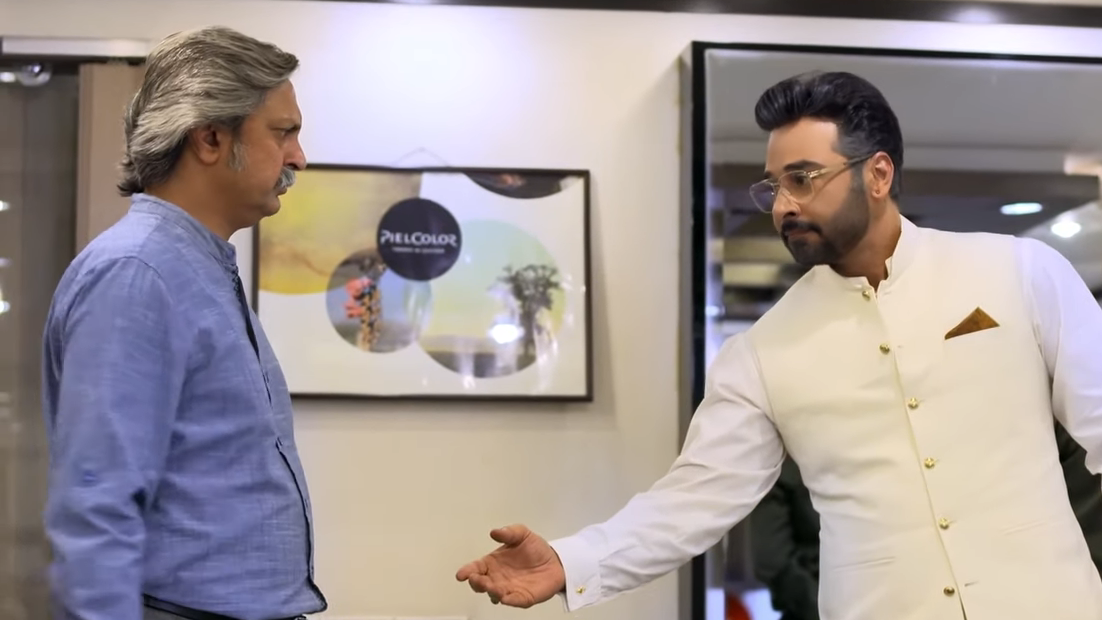 Here is the story and review of episode 2 of Geo TV drama ‘Muqaddar’ which was aired on 24 Feb 2020.

Saad returns home and Farkhanda is anxious to find her son ill. Later, she admires Raima for her audacious style of interview. Saif recalls the way she interviewed him and terms himself a happy man after a long time. Likewise, Raima too is impressed by Saif’s personality and his modern ideas. Haris shrugs off these notions and maintains that such people have a veiled face just to deceive the public. Maha comes up with the Biryani and Raima envies her when Haris gets closer to her.

Abeera’s conversation with her friends reveals that her fiancé Saad ignores her and she herself is not bothered to care for him. It seems that both are maintaining this relationship just to appease their parents. Saad is restive at the great loss he has to endure and complains of his fate for his misery.

The interview of Saif got a brilliant reception by the audience and he invites the whole radio staff for a dinner. This offer rings an alarm in Raima’s mind and she refuses just to avoid a further confrontation with Sardar Saif. On the other hand, Saif is on the mission of knowing more and more about her. He gets the necessary details about her and her family and sends some gifts to her home.

Raima’s uncle Arshad Alvi is perplexed to get a cheque of ten lac rupees along with sweets and flowers from Sardar Saif. Over the phone, he enquires Saif the reason behind this bounty. Saif shows his intentions of starting a relationship with him in exchange, the details of which he will reveal once he meets Arshad. Arshad and Bilqees then decide to hide this happening from Haris and Raima till the meeting.

The meeting takes place in Sardar Saif’s office where he makes clear his desire to marry Raima and in exchange offers financial help to Arshad as he will help Haris build his successful career. Arshad abhors the idea and refuses to succumb to such offers. Saif gives him three days’ time after which he will get what he wants since he has always got the things he ever wanted. Back home, Arshad is confused about what to do next. Haris has to go to Bhurban for a training session and Arshad is content to let him go for the time being.

Farkhanda enquires about Saif’s ruffled state. The ensuing conversation shows that both were married twenty-five years ago despite a sheer incompatibility between them. Saif considers his wife less educated and there is no match between them. Farkhanda, however, reminds him of her strong background than him. She knows her husband very well and can discern that it is only the love which can disturb her husband. That’s why she asks him the name of the girl which has taken away his rest.

The typical mentality of Saif which he initially denied has, at last, come out. He starts getting closer to Raima. A busy man like him has enough time to listen to her voice as he demands the interview recording. He uses modern tactics to fulfill his wish when he tries to intimidate Arshad that he will eventually get what he wants.

Arshad’s reaction to him is of a feeble man. Though he pretends to be courageous in front of Sardar Saif but is anxious at home to find his family in trouble. Like a wise man, he tries to keep his children away from this mess.

There are some confusing relationships in the drama. Saad calls Saif his uncle who is married to his mother Farkhanda. It might be the case that Farkhanda married him after Sikandar. Though there is no further clue to Sikandar’s character. On the other hand, Abeera and Saad are fiancés yet she calls Farkhanda her mother. It proves that Farkhanda might be her stepmother. In such a case how Abeera is going to marry her stepbrother? The relationship between both is not a pleasant one. Abeera even hints at making an end to it if she ever got exhausted. Likewise, after facing rejection from Raima, Saad is not willing to accept Abeera as his life partner.

Maha’s affinity towards Haris puts her as an alternate to Raima just in the case if the latter falls a victim to Saif’s power since Haris too seems to like Maha.

Please comment your opinions and suggestions below. You can also find drama’s complete cast, OST and crew information here.