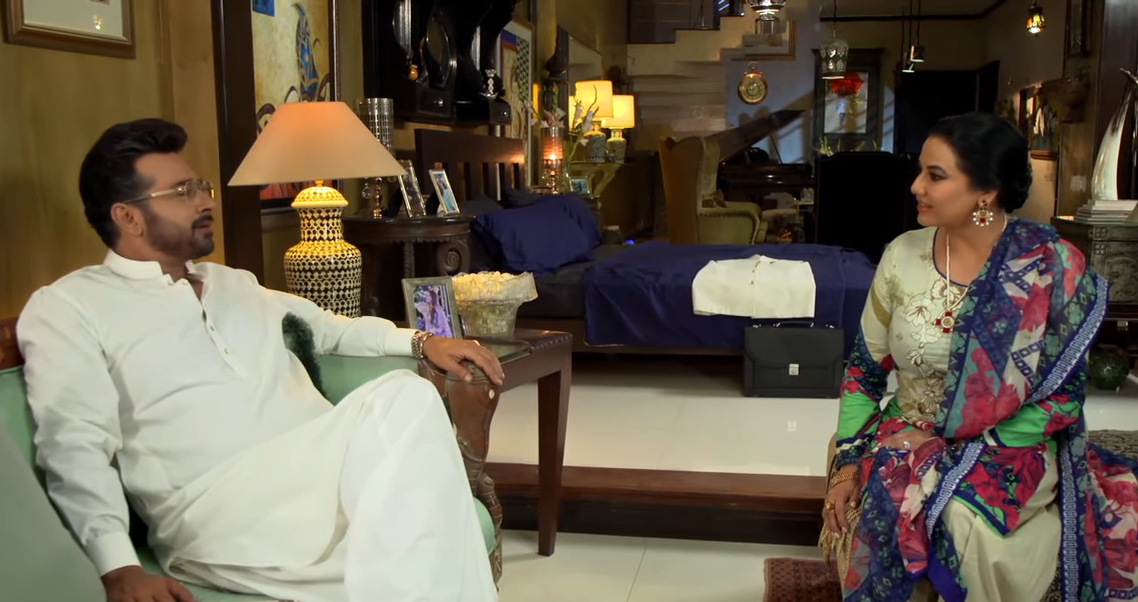 Here is the story and review of episode 3 of Geo TV drama ‘Muqaddar’ which was aired on 02 Mar 2020.

Saif refuses to reveal the reason behind his turbulence. Maha also learns about Haris’s departure for Bhurban and Haris does not let slip the opportunity to tease Raima again. While Arshad and Bilqees anxiously resolve to stop Raima from going university in order to save her from Sardar Saif’s approach. Raima sees Haris’s absence behind her aunty’s worry.

Saad’s mind is still occupied with Raima’s thoughts and he is unable to forget her.  Her obsession has also entangled the poor Saif who dreams of marrying her overcoming all the obstacles by his power.

The arrival of an unexpected guest stops Farkhanda from joining Saad and Abeera at dinner and the couple is forced to go out together. At the dinner, Saad’s concentration on his mobile phone disappoints Abeera who was expecting a romantic response from him. She, at last, lambasts at him and complains of the boredom she faced. She makes it clear that she does not want to ruin her life the same way he ruined her dinner. At home, Farkhanda calms her down and reveals her marriage with Saad will secure the family property going outside. Abeera, however, is defiant and will not become a scapegoat if such behavior by Saad continues in the future. Her friend, Zara consoles her but she again intends to break the relationship. On the other hand, Saad desires to make her merry but Raima’s obsession keeps him at bay.

Abeera seems to be a fan of a drama actor Hassan Shirazi. The fact that he is also the cousin of her friend Zara annoys her when Hassan meets two friends at a mall. Zara terms Abeera as his top fan and Hassan seems to be overwhelmed by Abeera’s beauty. His attitude bothers Abeera when he takes extra interest in her and she leaves angrily. Later she expresses her discontent with Zara over such an introduction and terms herself superior. It is revealed that Zara is also a friend of Raima.

Saif’s irritation at his wife Farkhanda starts to grow as he gets angry on her over petty matters. Doubting his changed behavior, Farkhanda perceives some danger coming in the future. Saif once again shows his contempt for women when he advises Saad not to pay attention to women’s opinions. Saad, however, wonders at his uncle’s ideas as he himself does not want to become such a harsh and rude person. Saif plans to go to Dubai with his friends and Farkhanda makes it clear that she loves him immensely. Saif’s sarcastic smile predicts a malevolent incident in his absence.

The episode focused more on Abeera’s character who like her father is insolent, haughty and angry. She does not want to care about others as she wants a successful life for herself. The prospect of breaking the relationship does not bother her as, like the previous episode, she intimidates to end the compromised relationship. A new link between Saif and Raima’s families is discovered. It is Zara who is a friend of both Abeera and Raima. It will be interesting to discover her role in this sense in the coming episodes.

Farkhanda’s strong bondage with Sardar Saif is beautifully depicted in this episode. She has started to nourish the fear of losing her husband as she thinks of his changed behavior. She, however, is daring enough to announce her deep love for him so that he does not get deviated.

The arrival of a new character, Hassan Shirazi has given a new twist to the plot. Abeera’s earlier liking for him and the confrontation of the two envisages a possible relationship between them both.

That concludes to our review of episode 3 of drama ‘Muqaddar’. Please comment your opinions and suggestions below. You can also find drama’s complete cast, OST and crew information here.