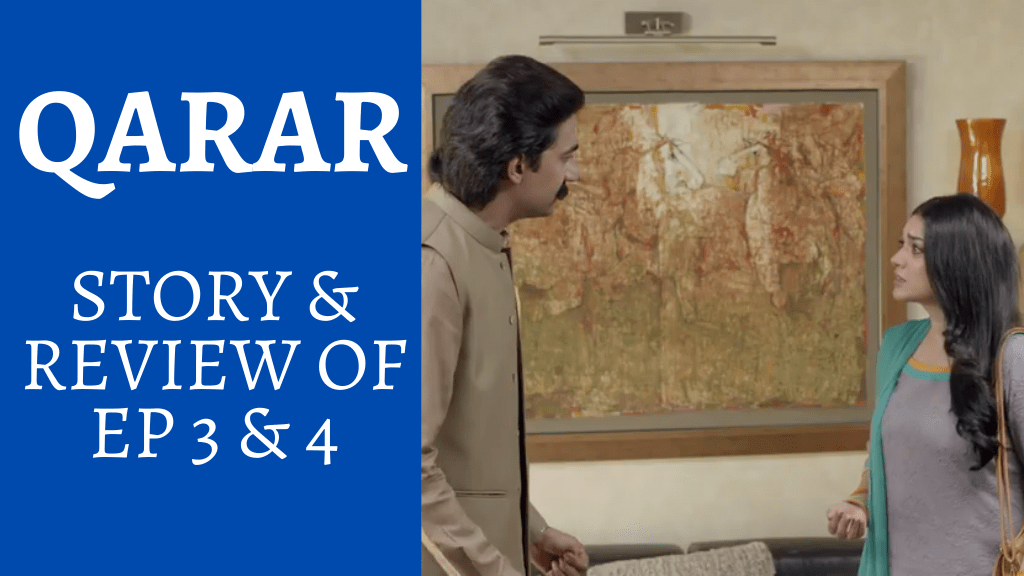 I believe all of us were thrilled with previous episodes of Hum TV’s drama ‘Qarar’ and had been waiting for the next ones eagerly. Well, finally the new episodes were aired and we see the drama moving at a good pace. Let us give you a ride to episodes 3 and 4.

Maya is more interested in luxuries rather than love. That’s why she demands a new house for her after marriage life from Ammar. Her selfishness irritates Fareeha. Maya is perturbed by the frequent phone calls of Salman. She actually is confused about her decision to marry Ammar. She is constantly at odds with her cousin and always thinks negatively about her.

Fareeha on the other hand selflessly helps her aunt financially for marriage preparations. As Fareeha and Nadira go for shopping, they cross paths with Ammar who accuses Fareeha of being jealous of Maya. Fareeha tries to clear the misconceptions with Ammar which Maya had caused previously. He reluctantly forgives her but has developed a negative opinion of her.

Little does Ammar know that his grandmother likes Fareeha more. Who knows the tables might turn and his fate might be entangled with someone he doesn’t like!

When Salman gets to know about Maya’s marriage being fixed, he constantly visits her home. Fareeha is first scared because of his status and bold nature and stays quiet. But when Maya leaves to meet him without telling anyone, she reveals it to worried Nadira who now fears her husband’s fury. Nadira asks Fareeha to never disclose Salman’s secret to which the dumb girl agrees.

Maya meets Salman again who opens up a shocking truth about his marriage. Maya is furious and insults him but he declares his love for her and is adamant to make her his bride. He takes Maya to his lavish Bungalow and she is taken aback to see all the facilities and grace. She relaxes a bit when he tells her that he does not maintain a cordial relationship with his wife and married her only for political reasons.

Maya is lured when he declares that she will be the sole owner of all his property, business, and house. What more did she ever dream of? The princess is imagining her future with her prince. On the other hand, Fareeha is worried and sensing some danger in coming times.

When Maya is questioned about Salman, she cleverly puts all blame on Fareeha for being rude to him and acts innocent stating that he is just an old friend. Although, we know what the girl is up to!

But is Salman the right man for her? Is he going to act upon his words or just laying a trap for Maya? I think Fareeha is destined to be with Ammar and Maya will marry Salman by hook or crook. Maya might face many troubles in her life as we know that the entry of Mikaal is yet to be made but Fareeha might spend a good life with Ammar. It is because one day the guy will see her good nature and fall in love with her. But will Maya let her live peacefully? This is something yet to come after many episodes but the matter of concern is how will the lives of both girls get entangled with the boys!