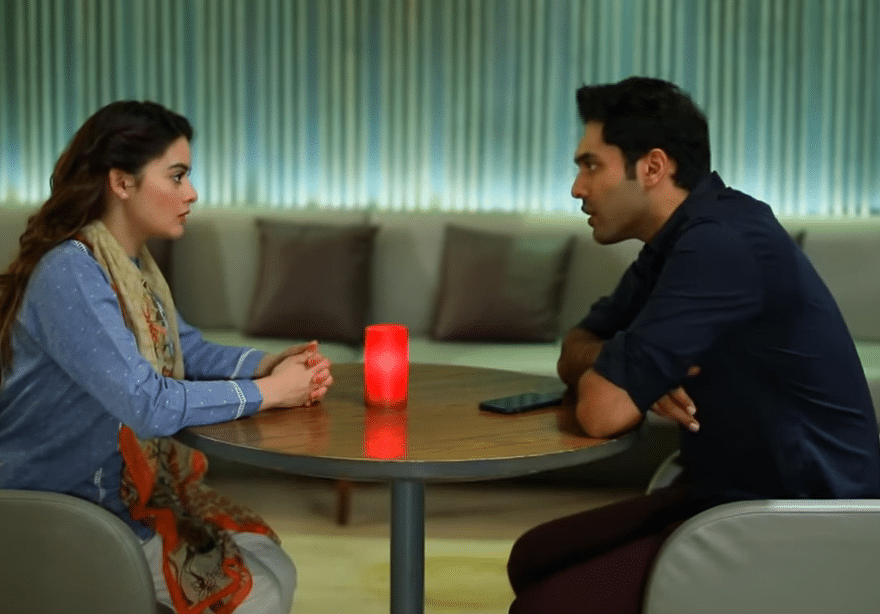 Soha’s unwillingly acceptance of Rayan’s proposal has resulted in a conflict. She is on the verge of choosing her fate. Definitely, she has two options ahead. For which one she will go for? Let’s find the answer and see how and in which direction the drama progresses. In the coming lines, I am going to state and review the story of Hum TV drama Qismat episode 4.

Soha confesses his love for another guy before Rayan who then informs his brother of Soha’s dissent. Waleed and Soha dream of a blissful life together.

Soha waking up from her sleep realizes that it was just a dream and fears it becoming a reality one day.  Waleed’s mother consoles his grieved son and tells him that she has got a better option for him. Fearing her own refusal due to Waleed’s behavior, Sara threatens to hurt herself.

Rayan enthusiastically inquires Maham about Soha’s initial response when she heard about his proposal. However, hesitant to speak the truth she evades the question.

After that, Aunt Qudsia objects Soha’s job now and conjectures that Rayan will not like her job now. She maintains that Soha should stay at home rather going out for such a petty job. However her father, Nasir gladly allows her to go to her job. Indeed, Soha had lied at home for going to the office since her leave was not yet over. In reality, she wanted to meet Waleed who fumes at her in the office. Waleed is not willing to talk Soha. Rayan comes to Soha’s office to deliver her forgotten lunch and sweets. He faces Waleed and offers him sweets.

Waleed rages at Soha and is dubious why she has not asked for divorce yet. He warns Soha to opt between the two options soon and decide whether she wanted him or her fiancé.

Adnan and Maham are living a happy married life. Adnan expresses his extreme affection for his brother.

Soha, at last, informs Rayan about her love and that she can’t accept to live an unfaithful life with him. She maintains that she had only accepted the proposal and didn’t want a serious relationship. She then demands her freedom from the bondage. Rayan requests Soha to reconsider her decision and try to compromise. He gives her a chance since it is a matter of the whole family’s happiness and fears consequences. However, she rejects his idea and sticks to her own resolution.

Waleed and Soha again argue and blame each other for the present circumstances. Soha complains Waleed’s inaction telling him that she has told Rayan the reality while he still has not done something except blaming her. Waleed is glad to know the fact and both reconcile and plan a new life.

On the other hand, Sara’s proposal is rejected due to Waleed’s refusal of the same family proposal.

Soha’s confession has stunned poor Rayan who now makes excuses for going to Soha’s home. Melancholic in recent situation, he decides to return to Australia immediately though his vacations are remaining. Adnan convinces him to alter his decision but Rayan pretends to care for his study. Adnan is dubious that his brother is hiding something from him. He discusses the matter with his wife and doubts his recent behavior regarding Soha. She terms it normal behavior.

After getting a promise from his brother that he will not mistreat Maham, Rayan apprises Adnan that Soha wants a divorce. Adnan is astonished to know the bitter truth.

Soha, at last, was able to gather the courage to change her life. While Waleed is still not able to do a favor to himself. Soha is depicted as a girl who wants to take control of her life and will not allow anyone to ruin her happiness. While, Waleed’s character is of a timid and coward guy, who does not has the guts to take a stand. Though her sister’s proposal is denied but still he does not make a case for himself.

The acting of Soha was outstanding throughout the whole episode. In the opening scene of the episode, she artfully expressed the emotions of a feared girl who has just witnessed a nightmare. Again, in the scene with Rayan, her expressions while confessing her love and rejecting her fiancé, were exceptional.

Adnan’s excessive concern for his dear brother is predicting that he will not hesitate to risk his own happiness for the sake of Rayan’s.

The encounter of Waleed and Rayan in the office is intense since Rayan’s happiness is igniting the fire in Waleed’s heart. Further, Soha’s confession of love is the climax of the episode; a scene in which she craftily depicted her emotions before her fiancé.

We are passionately waiting for Adnan’s reaction to this entire situation. We have seen how sensitive he is when it comes to his brother’s pleasure. Now his brother is in pain and he has a test ahead to prove his love. Will Waleed be able to benefit from the opportunity or will he again slip up the opportunity? Find all answer’s in the next episode. Till then, please comment on your opinions and suggestions and let me know what would you like to read in the upcoming review.