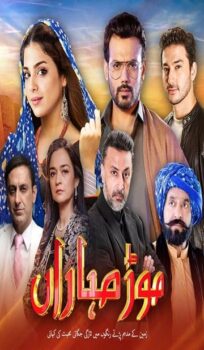 Below is the episode-wise story of the drama ‘Mor Moharan’. First, let’s look at the characters played by the cast:

Rohi lives together with her parents in the deserts of Cholistan. Her father Malook Shah is a wealthy magnate. One who dearly loves his daughter and can’t bear to let her down anytime. Rohi’s mother is saddened at her daughter’s departure for higher studies. However, her daughter soon consoles as well as reassures her mother. Time passes by and finally, it’s the day of Rohi’s return after completion of studies. Meanwhile, another landlady Almas is also awaiting her son Sikander’s arrival. She shares her worries regarding Sikander’s possible attitude with her right-hand adviser, Sher Alam. As it happens, Sikander was separated from his parents in early childhood and was brought up in a boarding school instead. All because of some dire conflicts between his mother Almas and his father Nawab Feroz. Both Rohi and Sikander share a brief interaction while at the station. Sikander is still upset at his mother for having ‘abandoned’ him. Meanwhile, he looks at Sher Alam with a derogatory stare while acting high and lofty like a prince. In the end, Gardezi is shown cheering the success of his care race with his supporters.

Rohi is saddened to witness the miserable conditions in which her village’s commoners live. She requests her father to help her address the water collection issue. Malook Shah readily grants his darling daughter’s wish. Sikander remains doubtful of his mother’s love for him. His heart remains unsatisfied for having become the victim of his parents’ war. Almas apologizes to Sher Alam for Sikander’s condescending behavior. Later, Sikander gets involved in a currently postponed project. The site of concern is none but Rohi, which is Malook Shah’s turf. Almas explains how Malook Shah demands thrice the amount necessary for the project’s continual. Malook Shah celebrates the return of his daughter with great fervor. He even humbly invites another youthful politician dude to attend the ceremony. The celebration goes as planned and all parties feel greatly entertained. Sikander once again confronts Rohi and participates in the traditional dancing events together with her. Malook Shah commemorates Sher Alam for being immensely loyal to Almas.

Malook Shah spends his time chatting with the political big shot Ahmed Gardezi as well as Almas and her son Sikander. It is revealed that sugarcane is deficient in Pakistan. Ahmed seems to have monopolized all sugarcane crops out of his selfishness. He continues flaunting his ‘goodness of heart’ in front of the media by pointing out how he’s the one feeding them with sugar. In Ahmed’s eyes, he’s the predator in this jungle; one from whose bullet no pigeon can survive. Almas reaches cloud nine after Sikander addresses her as his mother for the first time in the last two decades. Sikander is of the mind to invite Rohi and her family for breakfast. However, Almas rejects his opinion saying it’s too early to invite Rohi’s family as guests. Meanwhile, Rohi has vested all her time in the development work. The pure-hearted girl has lofty aspirations for her hometown. She’s of the mind to privilege each of her village’s people into self-sufficient people. Only then they can push forward their motherland as a whole.

Sikander berates Sher Alam for not extending his invitation to Malook Shah’s family. Almas questions her son’s behavior and asks him to apologise for having snubbed Sher Alam. The arrogant boy refuses to acknowledge his outrageous deeds and leaves immediately. Early in the next day, Malook Shah visits Sikander’s home as a guest with his beloved daughter Rohi in tow. They thank their host and then start talking about past when Shah Ji (presumably Almas’s father) was still alive. Rohi recalls days of her childhood when she used to visit this mansion almost every day. Almas’s keen eyes perceive Rohi’s desire to roam her mansion. She delegates her son with the task of accompanying Rohi. Sikander is overjoyed after receiving such a golden opportunity and even confesses his love to Rohi while on the way. The charming ‘Romeo’ manages to obtain Rohi’s phone number.

Ahmed Khan Gardezi is out on a hunt when Rohi hears the sound of gunfire. She hurries over to him and forbids him from killing poor animals. She even reveals her own pistol after being instigated by Ahmed’s lackeys. Her courageous act astonishes Ahmed Khan and this incident remains carved on his mind. Sikander is completely indulged in his feelings of love for Rohi. The duo often plan a meet and hang out together. Meanwhile, Sikander has shifted to their farmhouse just to avoid the restrictions set in place by his mother. Almas unsuccessfully tries her best to take her son back. Meanwhile, Sikander’s insolent attitude towards Sher Alam is truly pathetic. He even snubs his mother because he suspects her for having abandoned him in early childhood as dictated by his father. His mother keeps her mouth shut and refuses to shed light on the truth of the matter. Sikander calls his father, Nawab Feroz, and updates him regarding the events happening back at their bungalow. Later, Sikander is pleased to learn of his father’s return from abroad.

Nawab Feroz returns back to home after 20 years. Almas sees a reason behind his return. Sikander comes to meet his father and informs him about his love and his father offers his support to him at each step. Almas restrains Sikander from following his father until the reality comes out but he does not pay heed to her words. Almas gets depressed by remembering her past and how her father chose Nawab Feroz for her. Nawab Feroz was an alcoholic in past and was in a drunken state on his wedding night and those scenes still terrify Almas. Ahmed Khan Gardezi cuts some trees off and asks people to transfer those woods. Rohi catches him and insults him for this unjust behavior with the birds living in those trees.