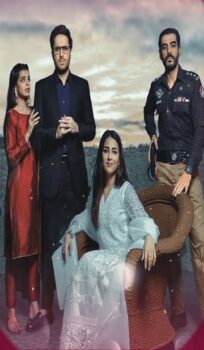 Below is the episode-wise story of the drama ‘Aakhir Kab Tak’. First, let’s look at the characters played by the cast:

Noor is a strong college girl and like a mother to her younger sister Fajar who is naive and easily gets scared. Their mother, Safia, is the oppressed woman of the family who is always belittled by their grandmother and father. They live with their uncle and his family. Basaam, their cousin misbehaves with Fajar but Safia lets it go. The grandmother turns the situation against Fajar and instigates her son who later beats Safia for her improper upbringing.

Basaam sneaks into Fajar’s room at night and she is scared to death. Noor convinces her father to let them attend tuition. The owner of the academy, Zafar, is a man with bad intentions and asks a girl to stay closer to Fajar. As Basaam tries to touch Noor, she slaps him hard as a warning.

Zafar cleverly motivates Fajar for her life but has some other intentions. The girl hired by Zafar keeps in touch with Fajar and brings her closer to Zafar. The brothers decide to get Noor and Basaam married but she is unbothered. The next day, Fajar is sexually harassed by Zafar who warns her to stay mum.

Noor’s uncle complains about her and she is asked to apologize to Basaam. Her father scolds her mother for the poor upbringing of children. Fajar comes home and is highly scared about the incident. The doctor reveals her to be showing symptoms of depression. She tries to commit suicide when her grandmother decides to marry her off.

Noor meets Bushra and makes an inquiry from Fajar. The truth is finally out and Noor is enraged. Their mother prevents them from uttering a single word and decides to marry off Fajar instantly. Basaam enters their room at night and Noor attacks him with a bottle. She explains her acts but gets scolded instead. The next day, she goes to the coaching center and beats Zafar who threatens to release Fajar’s video but she remains adamant to punish him.

Noor files a complaint against Zafar but is unable to reveal the real reason and asks Fajar to move on. Saim likes Fajar and agrees to marriage while she is hesitant. Rehana clarifies to her mother-in-law about not taking her into the new house. Safia is happy for Fajar while Rehana is perplexed about the change in Fajar’s behavior and life. Noor warns Bassam to stay away from them.

Saim and Fajar get married. As he presents a gift to her on the first night, she screams terribly but Saim lies to his family about seeing a lizard. Noor is happy as Basaam leaves the house with his family. Saim’s mother is worried about Fajar’s screams and about the weird situation of the couple in their room seen by Saim’s sister.

Fajar steps out of her room to interact with her in-laws when she is scolded by her mother. Saim is unable to understand Fajar’s trauma. Noor’s father is paralyzed after an attack. She calls her aunt who doesn’t pass the message to her husband and Noor is blamed for her father’s condition.

Noor is enraged when her uncle blames her for not informing about her father’s condition as manipulated by his wife. Saim requests Fajar to break her fears and talk to him openly. Saim’s mother asks Safia to talk to Fajar. Fajar keeps visiting her mother’s house and is scolded terribly by Safia for not working hard for her marriage.

Upon friend’s instructions, Saim talks strictly to Fajar and holds her hand who screams and faints. Later, he suggests her to go through therapy to feel better. She agrees as now she feels better with Saim. Saim’s mother mistakes Fajar to be pregnant as she goes to a doctor. Noor quits university and decides to join her father’s factory.