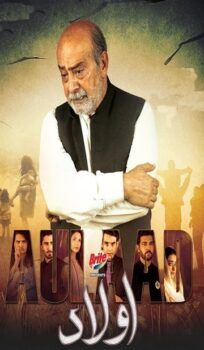 Below is the episode-wise story of the drama ‘Aulaad’. First, let’s look at the characters played by the cast:

Jalal and Zakia live with their three sons and two daughters. The eldest one Khurram misbehaves daily when he has to pay all household bills. The mentally unstable daughter Moni creates a fuss over Khurram’s mobile which leads to a heated argument between father and son where Jalal orders Khurram to leave the house.

Jalal folds his hands in front of Khurram in an attempt to stop him and trying to make him realize all the sacrifices he had made as a father throughout his life. In response, he gets insulted by Khurram who is adamant to leave the house. Bilal, the youngest son is getting trapped in the love with his cousin Muskan via her wicked mother.

As the family receives sad news of Jalal being retired, Khurram again starts claiming that only his salary matters and that his parents do not love him. Jalal, unable to bear the accusations, lets him leave the house and is shattered as his son steps out.

Adnan, the 2nd devoted son agrees to take all responsibilities of the family but he himself is financially unstable. Muskan’s mother wants Jalal to transfer his house in her daughter’s name if they want to move ahead with Bilal’s marriage to which Adnan takes a stand for his parents resulting in Bilal’s revolt.

Adnan and Bilal fight as Bilal misbehaves with his parents who wonder where did their upbringing go wrong. Farwa, Adnan’s wife tries to convince him to move out as the future is dark if Muskan is married to Bilal. Khurram’s son is in hospital but Jalal refuses to visit.

As Jalal and Zakia visit the hospital out of love for their children, Khurram misbehaves and doesn’t let them see his son leaving Afreen, his wife shocked at the way he treats his parents. Bilal is taken aback to find that Muskan’s alliance has been fixed somewhere else.

As Bilal requests his father to agree to the marriage condition, Adnan asks for his share in the house but later regrets hurting his parents. Bilal tries to attempt suicide in a fear of losing Muskan as per her saying. As the family is in hospital, Moni loses her control and Roshna calls up Khurram for help.

As Bilal recovers, he asks his parents to fix his alliance with Muskan. Jalal shares his grievance with his wife on how he is unable to bear the agonies. Adnan tries to make him understand his foolish demand but he stays firm. Muskan’s mother insults Jalal and Zakia and announces her disagreement with the proposal.

Khurram is enraged to find that Jalal has transferred the house in Muskan’s name. Jalal and Zakia fear that now they will be a burden on children but Bilal and Adnan promise to always take care of them. Jalal shares with Zakia his views about the importance of the relation between parents and children.

Roshna’s alliance is fixed and parents ask their sons to take responsibility for their sister. Bilal doesn’t bring Moni’s medicines and Muskan demands her in-laws to relieve Bilal from household duties. She misbehaves and Zakia slaps her. Muskan then warns Farwa that she might throw them out of the house which results in another argument.

Jalal waits for two hours to meet Khurram at his office but Khurram maltreats him again. Jala is moved when Moni presents her collected amount for Roshna’s marriage. Muskan makes weird comments in front of Roshna’s in-laws making them doubt the alliance.

The sons are not ready to pay a good amount for Roshna’s wedding and instead get blamed for their own financial situation. Roshna is enraged and warns the brothers not to misbehave with her parents stating that she doesn’t want to get married. Muskan is accused of stealing Zakia’s jewelry with Moni as an eye-witness which leads to another tiff at home.

Jalal faces health issues as Bilal and Adnan are caught in a terrible fight in front of Roshna’s in-laws. Jalal receives another shock as Roshna’s alliance is broken. Bilal apologizes to Roshna who pleads him not to hurt her parents anymore and she herself tries to keep the environment normal. Adnan informs his parents about his decision of moving to Dubai to improve his financial situation.

Jalal leaves the house as Bilal misbehaves due to Muskan. He has nowhere to go and Zakia calls Khurram’s wife who instantly welcomes them home. But the family is insulted by Khurram who refuses to let them stay at his home. Jalal with no other choice goes back home and apologizes to Muskan.

Jalal is heartbroken to hear Muskan and Bilal conversating about him finding a job to support household bills. Muskan talks to her mother about getting back at Moni for labeling her as a thief in front of everyone. Jalal leaves for Lahore to earn money. Muskan tricks Moni into finding the necklace from the cupboard and creates a scene in front of Bilal.

Jalal is shocked to find Adnan in Lahore whose wife misbehaves with him. Adnan unsuccessfully spends the whole night searching for his father. Roshna crosses paths with her ex-fiancé and Muskan tries to create a rift between Bilal and his family playing her pregnancy as a victim card.

Muskan provokes Moni who attacks her in return. Bilal under the pressure of his wife and mother-in-law agrees to send Moni to a mental asylum. Khurram tries to stop Bilal but backs off when he is asked to take Moni’s responsibility. Jalal sits on a footpath reminiscing how his children have shattered him.

Zakia is hospitalized as Moni is taken away. Jalal rushes back to Karachi as he hears the news. Adnan is also shocked and decides to leave for his family. Khurram gets irritated by paying all the hospital bills. Moni is suffering in the asylum while the only support for Zakia right now is Afreen and Roshna.

Zakia is elated to find Jalal and Adnan back in Karachi. Jalal refuses Adnan’s help and sends him back. Muskan forces Jalal to leave the house as she doesn’t want Moni back. He moves into his friend’s house. Moni is given an injection by the nurse for creating chaos at night and her health deteriorates.

Bilal is furious at Muskan and thinks about his actions. The whole family is distraught as Moni loses her life. The actual reason for death is kept hidden from family. Jalal doesn’t allow Khurram and Bilal to attend her funeral. Adnan leaves for Lahore but Moni is already cremated.

Adnan is disheartened for not being able to attend Moni’s funeral. The brothers argue and blame each other for Moni’s loss. Khurram realizes his mistakes and decides to ask for his parents’ forgiveness. He is trapped in a case of fraud with the company. Adnan wants to mend his ways but is stopped by his wife.

Khurram begs his father for forgiveness after he is jailed for his fraud and Afreen turns to Jalal for help. Roshna gets an interview in a huge company to support her parents. Bilal is regretful and wants to bring back his parents which angers Muskaan.

Jalal tries his best to save Khurram but in vain. Roshna is accepted for the job but the owner of the company turns out her ex-fiancé, Furqan. Muskan and her mother get worried about the family coming back to the house. Bilal is slapped and is insulted by Zakia for mistreating Moni when he comes to take them home.

The lawyer demands 25 lacs for Khurram’s help. Zakia contacts Adnan who denies having any money and instead invests the money in his business. His wife keeps manipulating his mind to worry about the future although he feels bad for his parents. Jalal is furious at Roshna for keeping her job with Furqan a secret.

Jalal apologizes to Roshna for scolding her needlessly. Adnan’s wife keeps manipulating his mind regarding his family. Roshna’s loan is approved by Furqan who still has feelings for her and discovers the situation regarding Khurram. Bilal questions Muskan if she had lied about the incident related to Moni.

Furqan informs his parents about his feelings for Roshan and proposes her which she denies firmly. Muskan and her mother are worried about Bilal’s behavior. Khurram begs for forgiveness from Jalal who himself is helpless. Zakia blocks Bilal who receives a hearing from Jalal when he comes to meet them.

Jalal is furious at Bilal for trying to involve in Roshna’s marriage. Furqan is elated as Jalal accepts his proposal. Afreen misses Khurram who begs for forgiveness from his family and blesses Roshna for her new journey. Adnan is tensed as he is not invited to his sister’s special day.

Adnan gets an earful when he calls Roshna for not inviting him to marriage. Bilal meets Moni’s soul in the graveyard and a long emotional scene steals the show where Moni claims her innocence. Khurram bursts into tears listening to it and asks Moni to forgive him. Muskan berates her mother for misguiding her as Bilal is slipping from her hands. Jalal searches for a new house as Afsheen gets the tag of “criminal family” from the landlord. Adnan and Bilal discuss how they have pushed away their parents in an attempt to make marriage successful.

Jalal takes the family to another house. Khurram is annoyed at himself as his actions have forced Afreen to seek a job to support his parents. Roshna doesn’t favour Furqan’s intentions to help her parents in the financial crisis. Bilal reprimands Muskan and leaves the house as he discovers the stolen necklace from her room that caused chaos in the house leading to Moni’s death.

Bilal visits Roshna to return her the necklace but she rebukes him for hurting their parents. He then visits Moni’s grave and begs for forgiveness. Muskan is furious at her mother for ruining her married life. Jalal exclaims to Roshna how he is helpless and cannot forgive Bilal for taking Moni’s life. Bilal wanders on the road resenting himself for his actions.

Bilal tells Adnan about the whole situation and how wrongly they have treated their parents. Adnan gets emotional when he receives an award and realizes his parents behind his success. He rebukes his wife for manipulating him. Muskan mistreats her mother for ruining her life. Adnan begs Jalal for forgiveness who requests him not to interfere in his life anymore.

The last episode leaves everyone in tears where Adnan finally successfully bails out Khurram and the three brothers vow to keep asking forgiveness from their parents until they agree. Muskan pays for her sins as she loses her child and can never conceive again. She disowns her mother and decides to live alone in the deserted house till she dies. 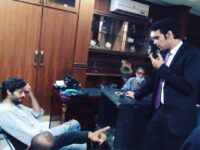 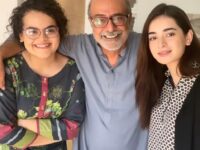 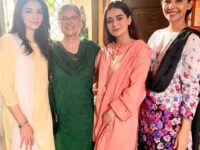 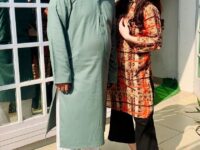 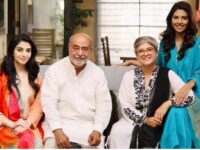 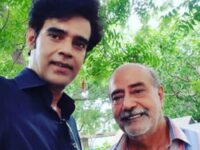