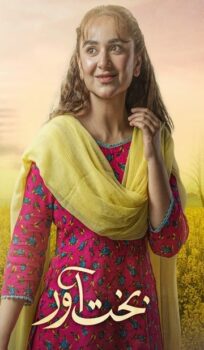 Below is the episode-wise story of the drama ‘Bakhtawar’. First, let’s look at the characters played by the cast:

The drama begins with a flashback scene showing an easy-going and jolly girl Bakhtawar who lives with her family in a village. Ever since the birth of her little brother, Bakhtawar grew close to her elder sister, Naseema. But one day out of nowhere, their abusive and alcoholic father, Razzaq abruptly marries Naseema to an old-age goon. While bidding farewell to her family, Naseema guides Bakhtawar to study passionately and become capable enough to escape their cruel father. In the present, Bakhtawar has become a confident and smart girl taking care of her mother, Shareefa, and bedridden brother, Guddu. The family is financially dependent on Shareefa’s brother, Hameed ever since Razzaq disappeared six years ago. Hameed’s wife is a spiteful woman who is against Bakhtawar’s idea of pursuing studies. She wants to marry Bakhtawar to her mentally retarded son, Rajju in exchange for paying for Guddu’s illness. Bakhtawar is offended by the proposal and refuses to marry as she is determined to become an independent girl instead of marrying someone and ending up like her mother and sister. Soon, Guddu dies after Hameed stops paying for his medication. At the funeral, the community decides to marry Bakhtawar to Rajju. When Bakhtawar finds out about it, she seeks help from her admirer, Ahad who helps them to flee the village and reach Karachi.

A goon robs Bakhtawar when she reaches Karachi. The chase for the robber separates her from her mother. Seeing her vulnerable, a stranger tries to exploit her but Bakhtawar sees through his evil intentions. She runs away and fortuitously reunites with her mother. They take refuge in Shareefa’s friend, Sakina’s house. Hameed is furious to discover the fleeing of the mother-daughter. Bakhtawar looks for a decent job but faces rejection everywhere. Seeing no other option, she agrees to work as a bus hostess. However, the job brings more agony to her as she experiences the horrible attitude of male passengers and witnesses her colleague getting shot by the manager. Her decision to quit her job agitates Sakina who plans to sell her out to Hameed in exchange for money. Bakhtawar learns Sakina’s intentions and rents a cheap room in a shady neighborhood.

Bakhtawar changes her guise into a boy by chopping off her hair and changing her wardrobe to be able to live in the new neighborhood. She seeks work in different stores but is offered laborious jobs suited for boys. Seeing her in male attire, a bunch of loafer boys in her street try to befriend her but hearing her feminine voice, they start poking fun at her. Sakina’s husband, Ghaffar informs Hameed about the development. Hameed orders him to find out about the mother-daughter location. Following a lead, Ghaffar discovers the location and summons Hameed to the city. However, they fail to track down Bakhtawar and Shareefa. Bakhtawar gets a job as a waiter in an open café. Although she puts up a happy face, her heart sinks while experiencing the harsh environment and behavior of strangers. Shareefa insists that Bakhtawar drop her dual personality act but she refuses.

Malik Dilawar, the only son of the famous politician Malik Sherzaman encounters a murderous attack at the café where Bakhtawar works. Bakhtawar pressures his gunshot wound with a piece of clothing and escorts him to the hospital in time. Later, despite Shareefa’s reluctance, she decides to continue her studies. Putting back the guise of a woman, she evades the street loafers and gets enrolled in a college. The extremely orthodox landlady tries to poke her nose in Bakhtawar’s life to acquire any kind of gossip. Bakhtawar loses her sleep after experiencing the lecherous behavior of the patriarchal society. She decides to quit her job after getting paid. Dilawar is an open-minded, modern boy who loathes his father’s profession and refuses to be a part of it. He, even more, resents Sherzaman due to the fact that he has engaged Dilawar to a girl of his choice as part of a business deal.

Bakhtawar gets fired from her job after she reacts badly to a pervert customer’s unmannerly advances. Fortuitously, she runs into Dilawar who offers her a job at his firm as his personal secretary whilst making it clear that he hates liars. Disguised as a man, Bakhtawar studies for her exams and works tirelessly at the job, earning a good reputation. Dilawar is highly impressed by Bakhtawar’s progressive behavior and promotes her. Sherzaman is weirded to see Dilawar’s new secretary with feminine traits. He suggests Dilawar double-check the employees’ background before hiring them on a job but Dilawar turns a deaf ear to him. Other employees at the firm start envying Bakhtawar after seeing Dilawar being extra considerate with her. Dilawar’s fiancé, Hooriya arrives in Pakistan from abroad and is furious with Dilawar for not welcoming her. Enraged, she comes to the office and is mystified to see his new secretary.

Dilawar feels suffocated by Hooriya’s possessiveness. Seeing him agitated, his mother asks Sherzaman to prioritize Dilawar’s interests and not to force him to marry Hooriya but to no avail. Hooriya’s father, Dastagir who is a business-minded person suggests his daughter ignore Dilawar’s attitude and focus on marketing her NGO. Bakhtawar develops feelings for Dilawar and wishes to show him her real self. Sherzaman gets fed up with Dilawar’s hidden charity work and advises him to do it publicly to gain the public’s affection. Sheeda, a street loafer suspects Bakhtawar is hiding something and out of curiosity hatches a plot to uncover her secret by indulging her in smoking. Nazar, Shareefa’s landlord proposes to marry Bakhtawar due to his first wife’s infertility. Bakhtawar fumes with anger and kicks him out of the house, threatening to blow his gaff to the entire neighborhood.

Bakhtawar arrives home reeking of cigarettes. Shareefa smells it and confronts her about it. Hoping to receive words of encouragement, Bakhtawar gets agitated by the questioning and misbehaves with her mother. This infuriates Shareefa and she ends up slapping her in the face. Guilty of her behavior, Bakhtawar begs her mother to forgive her. Shareefa agrees to forgive on the condition that she resigns from her job or confesses to Dilawar the truth about her identity. Perplexed, Bakhtawar takes solace in reading the poetry book that Dilawar gave her once. Shareefa meets an accident on the road and is escorted to the hospital by Sheeda and Nazar. When Bakhtawar finds out about it, she rushes to the hospital in her female attire. Seeing her bewildered about paying the hospital bill, Sheeda helps her pay the advance. Leaving Shareefa in the hospital, Bakhtawar returns home to change her guise to a boy unaware that she is being chased by Sheeda.

Sheeda, who has been aspiring to uncover Bakhtawar’s veil, sneaks into the house after Bakhtawar leaves for the hospital, changing her guise to a boy Bakhtu. Inside the house, he is confused to notice that Bakhtawar is nowhere to be found. Nazar sees someone breaking into his tenant’s house. When he tries to investigate, Sheeda runs away. Unable to accumulate funds for the surgery, Bakhtu borrows money from Dilawar. When Dilawar’s mother offers to give him charity, Bakhtu bluntly spurns it down, clarifying that he does not take aid. Perplexed about Bakhtawar’s whereabouts, Sheeda questions Bakhtu about his sister, Bakhtawar’s hideout and Bakhtu keeps stalling the rising questions. Hooriya asks Bakhtu to spy on Dilawar but he straightaway refuses to be disloyal to his employer. This pisses her off and she empoisons Sherzaman about Bakhtu, asking him to get him fired. When Dilawar is asked to entertain Hooriya’s demand, he instantly refuses.

Sheeda’s mother brings her son’s proposal for Bakhtawar. When Shareefa rejects it, Sheeda gathers the neighbors and presents Nazar with a complaint against his tenants, disgracing Bakhtawar as a characterless woman. When Bakhtu returns from work, he faces suspicious gazes from the neighbors. Furious, he goes to the landlord and threatens to leave the house if people keep interfering in his personal matters. To take advantage of the situation, Nazar once again tries to convince Shareefa to marry Bakhtawar to a respectable man like him. Overwhelmed, Bakhtu bursts into tears when Sherzaman orders him to massage his legs. When Shareefa informs Bakhtawar that Nazar is waiting for a reply to the proposal, Bakhtawar gathers courage, puts on her veil, and goes to Nazar, rejecting his proposal and blowing his gaff in front of his wife. She then goes to Sheeda and insults him in front of his friends for being a lowlife and cheap man.

Sheeda’s ego gets bruised when Bakhtawar humiliates him. Vengeful, he follows her to the college and attempts to throw acid on her face. Mistakenly, he misses his target and ends up ruining an innocent girl’s face. Devastated, Bakhtawar tries to run away and coincidentally runs into Dilawar’s car. Dilawar helps drop her home and offers to support the acid victim in getting justice. The news of the obnoxious acid attack spreads like wildfire and Hooriya decides to cover it to gain popularity. When Sheeda sees the news, he catches Bakhtawar, threatening to destroy her existence if she blows his gaff. Dilawar speaks for women’s rights but his father tries to suppress him. He feels suffocated and vents out his emotions to Bakhtu, telling him that his mindset matches with him. When Hooriya sees Dilawar spending more time with Bakhtu, she becomes envious and accuses him of having an inappropriate relationship with Bakhtu.

Dilawar tips his police friend Mohsin and manages to get Sheeda arrested. When Nazar’s wife finds out about it, she suspects her tenants are responsible for it and fears that they might do the same with Nazar due to their high influence. Hooriya becomes curious when she sees Dilawar using his sources to get the acid attack culprit arrested. Bakhtawar anonymously calls Dilawar, requesting him not to involve her in the case. Later, she gets worried when she realizes that she mistakenly left her exam documents in Dilawar’s car. Taking the guise of Bakhtu, she fearlessly barges into his car to fetch her documents in front of other servants. Sherzaman’s personal servant complains to him about Bakhtu, accusing him of peeking into Dilawar’s personal files secretly. Dilawar expresses ignorance about the acid case when Hooriya confronts him about it. This infuriates her and she starts pulling strings to get Sheeda released on bail.

Bakhtawar longs for girly pleasures and goes to a shop guised as a boy to buy makeup. Shareefa notices Sheeda standing outside her house, gazing at her with a knife in his hand. Hysterical, she informs Bakhtawar about it who refuses to believe in her. Hooriya’s brother empoisons Dilawar against Bakhtu, accusing Bakhtu of laying hands in front of him. Hooriya summons Sheeda to her office, asking him to figure out the reason for Dilawar’s interest in the acid case. Dastagir suggests that Hooriya back off from the case to maintain her relationship with Dilawar but she refuses to comply. Bakhtu loses his wits when he hears Mohsin informing Dilawar of the suspect’s bail, realizing that Shareefa was right about Sheeda earlier. Dilawar gets surprised when Mohsin informs him that Dastagir was responsible for Sheeda’s bail.