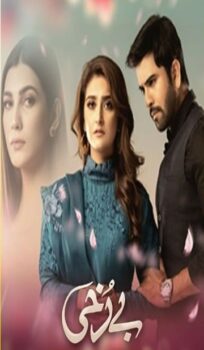 Below is the episode-wise story of the drama ‘Berukhi’. First, let’s look at the characters played by the cast:

Kamran, a womanizer and Maira’s uncle, turns to be the reason for his employee, Saba’s suicide. Maira and Sabeen are cousins but Sabeen hails from a poor background that irks Maira when they are invited to her lavish birthday party. Kamran gets attracted to Sabeen at the party.

Maira’s mother, Nazia, asks Sabeen’s hand for Kamran, leaving everyone shocked. Sabeen’s father refuses Kamran’s proposal at which Nazia insults and taunts him about his poverty. Irtiza’s father, Agha sahib, fainted when he was about to reveal a truth.

Sabeen’s father, hurt by Nazia’s words, gets a heart attack and dies. The doctor reveals that the heart attack was caused by medicine overdose that means he committed suicide. Nazia doesn’t tell anyone about the refusal. Irtiza is afraid to marry again due to his first wife who cheated on him.

Nabeel decides to refuse the proposal himself but they can’t find the bangles that Nazia gave them with the proposal. Due to the harsh conditions, Sabeen’s family moves to their uncle, Maira’s father’s house. Irtiza’s car is attacked but no harm is done. Sabeen’s mother hears Nazia backbiting about them.

Nazia asks her friend Sami to find a nice proposal for Maira, who suggests that they should get rid of Sabeen’s family. Nazia locks Sabeen’s mother secretly, out of the house. She gets a stroke and is paralyzed. Maira was misbehaving with Sabeen, when Kamran slaps Maira.

Nazia talks to Sabeen’s mother about Kamran and Sabeen’s relationship. After recovery, Maira takes a promise from Kamran to marry Sabeen and divorce her as well. Sabeen succumbs to pressure and agrees to marry Kamran. Maira’s father, Mansoor asks for Nabeel and Sana’s marriage to be fixed as well.

Sana loves Nabeel and promises to wait for him until he gets settled. Sabeen visits an orphanage where she mistakes Irtiza for the manager. After knowing the truth, she insults him a little. Irtiza’s family invites Maira’s family to his birthday party. Nazia tries to sabotage Sana and Nabeel’s relationship.

Sabeen volunteers at the orphanage and apologizes to Irtiza. Irtiza introduces himself as an employee of the orphanage. He doesn’t know his family’s marriage plans for him and Maira. Mansoor makes Nabeel a partner in his company and Sana becomes the owner of their house. Nazia and Kamran decide to take revenge on Sabeen.

Maira and Nazia visit Irtiza’s house while Irtiza has started to like Sabeen. Ayya Jaan knows of Nazia being greedy and Maira being spoiled, still wants to fix Irtiza’s marriage there. Irtiza and Sabeen hide their truth from each other while working together. A maid is about to tell Sabeen’s mother something when Nazia enters the room.

Nazia suggests Sabeen’s mother for the direct marriage of Kamran and Sabeen instead of engagement. Nabeel buys a new bike and takes Sana for a ride at which Maira and Nazia get upset and behave rudely, witnessed by Mansoor. Sikandar mistakes Irtiza’s relation being fixed to Sabeen instead of Maira. Ayya Jaan visits the orphanage and finds Irtiza there.

Ayya Jaan, after finding out about Irtiza and the orphanage, tries to keep a track of Sabeen. Upon the advice of Kamran, Nazia apologizes to Sabeen’s mother. Irtiza thinks his marriage is fixed with Sabeen. Mansoor doesn’t agree with Irtiza and Maira’s relationship. Irtiza reveals his true identity to Sabeen.

Irtiza’s family comes over for Maira’s proposal. Sabeen’s mother doesn’t meet them and forbids Sabeen to do the same, upon Nazia’s request. Mansoor asks them for time to make a decision. Ayya Jaan is Irtiza’s stepmother due to which she hates him. Irtiza gets shot as someone tipped off his location.

Irtiza’s friend, Qasim takes Sabeen to meet Irtiza at the hospital. He asks her about the proposal but the misunderstanding isn’t clear yet. Nikkah’s date is set after Kamran’s insistence but Mansoor asks for house papers first. Mansoor insults Kamran due to which he decides to ruin Sabeen’s future.

Sana’s engagement date collides with Irtiza’s birthday. Maira asks Nazia to get it changed no matter what and she does. Maira taunts Sabeen about her father’s suicide. Irtiza calls Sabeen to apologize when she clears him about her nikkah being fixed elsewhere. Qasim tells Agha Jaan about Irtiza’s interest in Sabeen.

The Police keep investigating the attack on Irtiza. Kamran’s girlfriend reaches his office and sees his wedding card. She creates a scene and he hits her. Iritiza accidentally calls the traitor servant, Naila, thinking her to be Sabeen. Naila informs Ayya Jaan who sends her and Atya to Maira’s house to investigate what’s happening.

Agha Jaan meets Sabeen and clears all the misunderstandings. She is happy for Maira. Naila tells Ayya Jaan everything and her suspicion about Irtiza liking Sabeen. Sabeen gets a call at her wedding that an orphan has been injured at the orphanage. Mansoor takes her to the orphanage. Irtiza reaches the hospital and Kamran sees him with Sabeen.

Kamran slaps Sabeen and questions her character while Mansoor cancels their wedding. The orphan gets well. Mansoor gets hospitalized. Irtiza visits Sabeen’s house to inform everyone about the situation. Following Maira’s plan of revenge, Kamran apologizes to everyone. Naila finds out about the whole incident through the maid Asma and reports it to Ayya Jaan.

Agha Jaan comes to see Mansoor and asks Sabeen if she would marry Irtiza but she refuses. Ayya Jaan is worried about Agha Jaan’s intentions. The orphan, Fida, dies and Irtiza cancels his birthday party. Sabeen, Agha Jaan, and Irtiza are at the funeral when Ayya Jaan also arrives there.

Sabeen informs Irtiza regarding Agha Jaan sending his proposal to her. He scolds Qasim and Naila overhears the conversation. Kamran pays to kill Sabeen. Maira and Nazia misbehave with Nabeel. Agha Jaan informs Ayya Jaan and Irtiza about Sabeen’s rejection before Irtiza gets upset with Agha Jaan for not informing him about the proposal.

Agha wants to bring another proposal for Sabeen but wants a direct conversation with Sabeen and her mother so they could make a decision without any influence. But Shah Bano has other plans and chooses her maid, Naila for Irtiza. Naila starts dreaming big but Bajia advises her to stop treading on the dangerous path. Kamran’s man tries to hit Sabeen and Irtiza by a truck. Irtiza saves Sabeen from being hit but she gets injured and is rushed to the hospital. Kamran fumes at his man for his unsuccessful attempt while Irtiza vows to find out the culprit.

Irtiza blames himself for Sabeen’s woes who battles for her life. He announces to marry her when media questions his relationship with Sabeen. Nazia fumes at Maira for being Kamran’s accomplice in the murder attempt. Sabeen comes to her senses and is pleased to hear about the marriage announcement. Irtiza regrets making his love public and plans to talk to Sabeen so she could take her decision without any pressure.