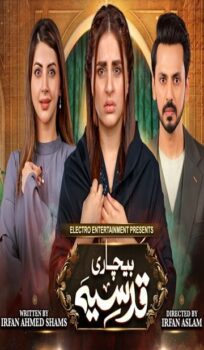 Qudsia, a poor girl tries to hide her poverty from her university fellows. Her mother, Hajra works at Ibrahim’s house who coincidentally happens to be Qudsia’s classmate but she is unaware of the fact. Anaya arranges a birthday surprise for Ibrahim and announces a grand birthday party to which he resists. Qudsia’s father, a rickshaw driver, gets caught in strife outside her university but Ibrahim comes to the rescue. Anaya argues with Ibrahim as he doesn’t show up at the party. As an apology, he takes her to dinner. Anaya’s father spots them together and seems upset. Hajra gets hospitalized and Ibrahim visits her at the hospital. Luckily Qudsia’s secret remains intact. Her aunt and cousin indirectly accuse Hajra’s character at which Qudsia’s father fumes. Ibrahim’s conversation with Qudsia in the class infuriates Anaya and she gets in a fight with Ibrahim. Anaya decides to befriend Qudsia, but surely has no good intentions towards her.

Qudsia decides to go to work instead of her mother until she feels better. She still doesn’t know that her mother works at Ibrahim’s house. Ali gets in Hajra’s way and touches her hand to befriend her but gets slapped instead. A love story between Qudsia and Ibrahim is approaching with Anaya as a hurdle who herself is interested in Ibrahim. How will Qudsia deal with the elite class by hiding her true identity? It is a matter of time to see if Ibrahim, who seems to be falling in love with Qudsia will accept her despite her poor background?