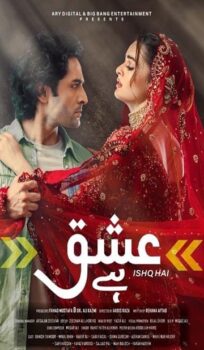 Below is the episode-wise story of the drama ‘Ishq Hai’. First, let’s look at the characters played by the cast:

Nimra and Sameera, two sisters, wish to get married to their maternal aunt’s two sons, Shahzaib and Raza. However, Shahzaib is already in love with another girl, Isra, and doesn’t know that his mother has already fixed his marriage with his cousin, Nimra. At Isra’s brother’s wedding function, Isra meets Haaris; a boy who is a common friend and is interested in marrying her.

Shahzaib’s mother tells him about his Nikkah being fixed with Nimra who then reveals his love for Isra to his mother but she pressures him into marrying the girl of her choice. Meanwhile, Haaris’s proposal comes for Isra and she refuses. Her family being against love marriage forcefully fixes her Nikkah with Haaris. Shahzaib tries to convince his mother again, but she refuses to listen.

Shahzaib picks Isra from her brother’s reception and presents her at his and Raza’s Nikkah function. His family insults Isra while Nisar and Farhat; Nimra’s parents, break off both weddings. Isra gets seen with Shahzaib and her father publicly tells Shahzaib to back off. Also, Haaris tells his mother to go ahead with his wedding with Isra despite all the chaos.

Naina, Isra’s sister-in-law fights with Hammad (Isra’s brother) for ruining their reception and intends to seek revenge from Isra for the same. Raza too fights with his brother as his marriage is now conditional to Shahzaib’s marriage with Nimra. Isra breaks up with Shahzaib and agrees to marry Haaris.

Shahzaib’s mother tries to convince Farhat into rejoining the two marriages who agrees and convinces her husband. Sameera who is after a high-class life tries to refix their weddings to take revenge from Shahzaib by using his family against him. The two sisters rejoice after hearing about Isra’s marriage getting fixed with Haaris. Meanwhile, Naina repeatedly taunts Isra and provokes Hammad against her.

Shahzaib threatens Haaris who tells Isra. She calls Shahzaib and asks him to forget her. Frustrated, Shahzaib breaks things and harms himself perturbing his mother and brother. His behaviour also agitates Samreen and Nimra. Meanwhile, Isra seeks forgiveness from her father. Later, she goes for shopping where Shahzaib vows not to leave her at any cost.

Hammad asks his father not to trust Isra anymore. Nimra tells her father, Nisar that she is disappointed with Shahzaib. Haaris sends his wedding card to Shahzaib and then taunts him on the call. Hammad scolds Naina for sending Isra alone to the parlor after someone picks her from the parlor.

Hammad inquires from the guard and the camera footage reveals Isra leaving the parlor willingly. Knowing the fact that she ran away, her parents apologize to Haaris and Maryam. It was Shahzaib who kidnapped and intoxicated her. Later, he blackmails her into marrying him. Hammad and Haaris look for Isra but return empty-handed. Naina further instigates Hammad against Isra.

Isra gains consciousness and asks Shahzaib to take her back home. She cries and accuses him of ruining her father’s prestige. Shahzaib takes her home in the middle of the night and Isra’s father expresses his disdain for her before he dies a sudden death. Isra attends his funeral where Hammad kicks her out and she cries at her father’s grave.

Hammad takes a gun and points it at Shahzaib and Isra but doesn’t kill them. Naina taunts her mother-in-law about Isra. Saba makes Hammad swear not to do anything rash. Isra blames Shahzaib for her father’s death. Nisar, Farhat, and Sameera talk to Shahzaib’s mother when Shahzaib walks in. He announces that he has married Isra and his mother asks him to leave the house.

Isra tries to commit suicide but Shahzaib stops her. Nisar tells Farhat to cut all ties with her sister. Harris provokes Hammad regarding Shahzaib. Shazaib goes to Isra’s house seeking forgiveness but Hammad beats him. Nimra calls Shahzaib and asks him to leave Isra while Isra overhears. Isra tells Shahzaib that his stubborn nature brought shame to her, so she’ll never forgive him.