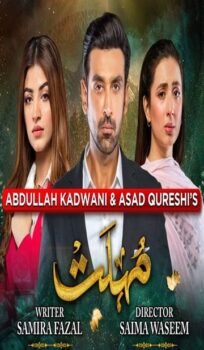 Below is the episode-wise story of the drama ‘Mohlat’. First, let’s look at the characters played by the cast:

Talat gets his brother married again whose first wife gave birth to three girls named Maham, Rida, and Navera. Maham is a modern and stylish girl who wants to marry a rich man. She also wants to get revenge for her mother so she tries to trap her cousin and Talat’s son, Dawar. Dawar is interested in Navera but she, being the third baby girl, is abhorred by the whole family except Rida. As a proposal arrives for Maham, Rida asks her mother to refuse as Maham’s love interest is Salman. Rida captures her half-brother’s immoral acts like obscene videos and Navera sees it in her sister’s mobile.

Maham catches Navera watching indecent pics and informs Dawar about her low character. Navera gets scared and tries to justify her stance but in vain. Maham instigates Dawar by cleverly connecting Navera with Salman and claiming both of them to be involved in a romantic relationship. Talat sets rupees 50 million as the dower and Maham is married to Dawar. She shows her true colors after marriage and starts misbehaving with her aunt who realizes Maham’s true intentions and now wants Navera as her daughter-in-law.

Maham starts showing her true colors by taunting Talat off and on and misbehaving with her. Dawar’s cousin, Isa makes an entry that annoys Maham. Talat tries to keep Navera close to her house. Maham doesn’t understand the game Talat is playing. Isa instantly grows closer to Navera and expresses his likeness to Talat. Maham is furious as Isa wants to marry Navera. Yehab completely crosses all limits and misbehaves with his parents. They are shocked as he threatens to shoot his father with a gun. Rida, being aware of his actions, is scolded by her father for hiding the truth about Yehab.

Maham talks to her mother about Isa’s proposal and Rida mistakes herself to be Isa’s love. Isa takes Rida for tests and it’s found that she has a brain tumor. He reveals to Navera that she is the girl he wants to marry but she begs him to propose to Rida. Talat berates Maham for not caring about her sister and during the argument she reveals about money Dawar gave to her as a gift and also threatens to leave the house. The tumor is partially removed and Rida is not cured completely but this secret stays with Dawar, Navera, and Isa. Talat shouts at her brother in the hospital for the wrong upbringing of Maham and how insolent she is.

Navera asks Isa to marry Rida if he loves her. He asks her parents to agree as he wants her to continue treatment abroad. Maham and Dawar are welcomed back home as Maham is pregnant. She opposes Rida’s marriage but Isa shuts her up. Rida and Isa are married in a hospital. Yehab is caught by the police for trying to loot a shop. Navera’s mother reminisces how unjust she had always been to her. Dawar gives a mobile phone to Navera as per Rida’s wish but she is scared to keep it. He asks for Isa’s help who at night takes it back from Navera to give it to her in front of everyone. Navera is blamed for having a relationship with Isa.

Dawar reveals the truth and berates Maham for trying to spoil the relationship. Isa tells Rida about his former wish to marry Navera and both sisters share a sweet moment before Rida leaves for abroad with Isa. Dawar helps Navera create her first video that annoys Navera’s mother. Maham tries to win back Salman who responds because he wants revenge on her. Maham’s sweet gestures worry Navera and she is worried about her next move. She tries to avoid Dawar. Talat suspects something weird but stays quiet. Tahir finds himself completely alone and misses Zahida and his daughters as Yehab keeps misbehaving with him. Maham makes an excuse to Dawar to avoid going with him and Navera to celebrate her success and is spotted later by Dawar on a date with Salman.

Zahida is instigated by Maham and takes her back home after she creates a huge scene. Maham also deletes Navera’s channel who is distraught to find her lost documents hidden by Maham. Navera shares with Rida how Maham has ruined her career and comes to know about the reproduction of Rida’s tumor. Dawar comes to Navera’s house to help her apply for Zahida’s visa so she could visit Rida. Zahida too realizes about injustice towards Rida and considers Maham wrong. Maham signs the divorce papers while Zahida thinks Dawar and Navera are interested in each other.

Dawar signs the divorce papers with a broken heart. Seeing the closeness between Navera and Dawar, Zahida suggests Talat to get them married. She requests Navera to convince Dawar and she sadly asks Dawar to marry her so she can take care of the baby. The two marry for the sake of a newborn girl, Amal. Maham leaves her family and marries Salman. She is slapped by him as they enter a new house and he reveals it to be revenge. Talat is rude to Navera and considers her simply a child taker. Maham, seeing Salman’s behavior, reminisces the warnings of her mother and sister. Navera is hurt when Talat asks the maid to keep an eye on her as she watches Amal.

Maham faces a terrible time at Salman’s place and discovers the loss he faced in business and went under treatment for depression after she left him. She keeps ridiculing him and his father but tastes her own bitter medicine every time when Salman mistreats her. Navera helps her father in a meeting with a new client causing Dawar to doubt her having feelings for someone else. The next day, she helps her father adjust to her mother’s house when he is thrown out by Yehab and his mother. Navera is upset as Dawar doubts her and she decides to leave the house. Navera misses Amal terribly when Dawar takes her to the office after an argument with Navera.

Navera shares everything with the helpers of the house and forbids them from informing anything to Dawar. They support Navera as she leaves the house. Navera misses Amal who gets cranky remembering her. Dawar visits Navera to find her father at home and finds out the truth. She doesn’t forgive him when he apologizes as she hates to be compared to Maham all the time. Yehab tricks Maham into investing money and she takes the bait. His mother warns him of dishonesty but he shuts her up rudely. Rida begs Dawar not to ever leave Navera considering it her last wish. Navera comes back home and is berated by Talat for leaving Amal suddenly.

Talat looks for a new proposal for Dawar but he refuses to go and Talat berates Navera for trying to spoil his life. Maham spots Dawar and Navera with Amal and misses her daughter. Yehab takes all the money from the bank through Maham’s cheques and is shot down by goons with his mother. Maham is distraught at the thought of karma hitting back and is thrown out of the house by Salman. Talat, upon seeing her unconscious, helps her. Rida’s condition deteriorates and her father flies to her as well. Dawar consoles Navera as she cries for Yehab.

Maham asks Dawar for forgiveness but he ignores her. She tries to get close to Amal and talks to Navera about Dawar. Navera is shattered upon hearing about Rida’s death. Talat consoles Maham and sees her changed personality. Dawar consoles Navera. Maham doesn’t want to go back and stay with her child but Dawar warns her to not meddle in his life. Maham smartly praises Navera for ruling the house enraging Talat. Dawar expresses his feelings to Navera when she decides to go to her mother’s house. Maham is worried to hear Dawar’s confession to Navera.

Dawar asks Maham to leave the house as Salman doesn’t intend to divorce her. He later allows her to stay after she asks Amal. She is irresponsible towards Amal and scolds Navera when she tries to handle her. One day, Maham leaves Amal in a tub of water where the baby drowns. Maham’s parents request her to leave their lives. She, traumatized, leaves a goodbye note to Navera. Salman divorces her and kicks her out. She loses her mind and lives in a shelter home while Navera and Dawar unite and enjoy their blooming love with Amal and their parents together.