Alert
Our site is going through some design changes due to which we are unable to update content.
Search 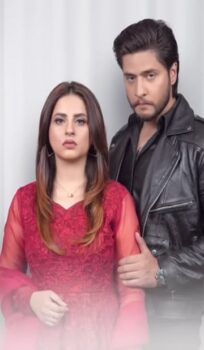 Aleem has brought up his two daughters (Hadia and Fizza) quite perfectly and the family happily lives in Hyderabad. He had helped his friend, Safdar some 25 years ago for settling in USA.

Safdar has now become a successful and humble business man who has returned from USA just to save his family from moral predicament. But his family (which includes his wife Sheena, a son Faizan, and a daughter Natasha) struggles to adopt life in Pakistan and to comply with Safdar’s conservative views. Especially Faizan, a truly spoiled brat has no respect for local customs.

Safdar has also helped his widowed sister through the years whose son, Razi is employed by Safdar now. A conflict brews within Safdar’s family after he decides to marry Faizan with Hadia and Natasha with Razi. Meanwhile, Faizan’s friend, Ramsha plots to get his wealth by marrying him. Amid all this chaos, Razi falls in love with Hadia.